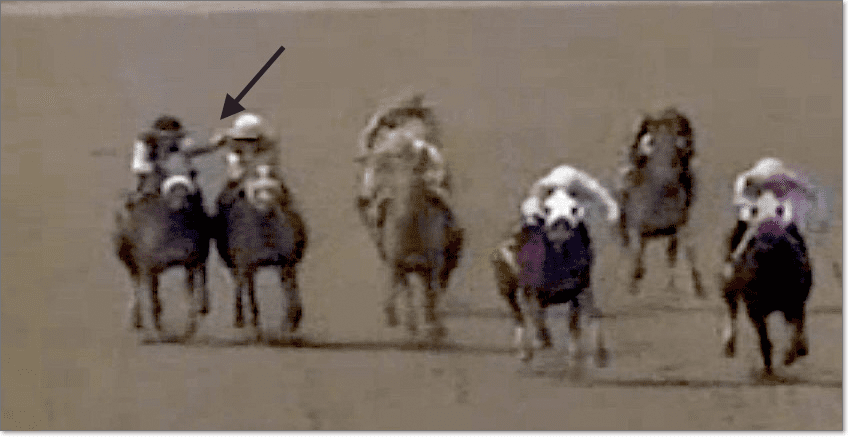 TWO US jockeys are at the centre of a bizarre scandal that continues to sour the American racing scene.

Jockey Angel Castillo will face an inquiry after he took another rider’s whip during a race in Pennsylvania.

Castillo took fellow jockey Pierre Hernandez-Ortega’s whip at the top of the straight in a $US15,000 claiming race at Parx last Monday. Castillo then used the ‘borrowed’ whip to secure his mount a second-place finish, whilst Hernandez-Ortega’s mount dropped out of contention.

Both jockeys proclaimed they “got tangled up”, but considering the poor history of one of the jockeys, it’s seemingly hard to believe that was the case.

Both jockeys were involved in an inquiry into the ownership of an electrical device found in the Parx jockeys’ room in May of this year.

Hernandez-Ortega was found guilty of owning the device and his jockeys’ license was revoked, but he continues to ride on a stay of proceedings until his appeal is heard.

The on-course stewards did not open an inquiry into the matter, but the Pennsylvania Racing Commission said that the stewards “would be held accountable for their decision” and the jockeys would have to explain their actions on a date to be fixed.

See the race for yourself below:

Punters may have seen Godolphin runner Mogador entered a couple times over the past few days, but due to wet tracks it was kept safe and it finally ran in the Pro-Ride Handicap at Warwick Farm on Wednesday.

The son of Lonhro was the best-backed runner of the day at $1.65 with Sportsbet.com.au and it produced a scintillating run to score narrowly thanks to a calm ride from jockey James McDonald.

McDonald was held up behind runners in the straight, but he had plenty of horse underneath him. He switched back to the inside and was able to muster enough momentum to hold off stablemate Orujo which had the clear run down the outside.

Mogador looked a much stronger horse that competed against star colt Exosphere last season and O’Shea is keeping his options open.

“That’s a special effort for him to come back on the inside and bullock through,” O’Shea said.

“We’ll get him home and see how he pulls up, but he’s entered for the Blue Sapphire in three weeks which is probably a bit of a jump in terms of grade.

“We could leave him home for the Brian Crowley, but probably would need to give him another run in the meantime.”

O’Shea is looking towards an autumn campaign for Mogador, in particular the Oakleigh Plate which, like the Blue Sapphire, is also run at Caulfield.

“The key to going to the Sapphire is giving him the opportunity to have a run around at Caulfield in the event we decide to head to the Oakleigh Plate in the autumn,” O’Shea added.

Last-start winner Fawkner is the narrow favourite to win the 2015 Underwood Stakes at at Caulfield this Saturday.

The Robert Hickmott-trained grey is currently priced between $3.40 and $3.60 with bookmakers, but if you bet between the hours of 10-11am this Saturday with Sportsbet, you will get an increase on your odds.

Godolphin runner Contributer is on the second line of betting at $4.20, following a disappointing effort last time out in the Group 2 Dato Tan Chim Nam Stakes at Moonee Valley.

Bet365.com has both horses at $3.60, which is the best price available for Fawkner, but the worst for punters wanting to back Contributer.

Best prices available at either Sportsbet, CrownBet, Bet365 or WilliamHill*

New Zealand runner Volkstok’n’barrell is well over the odds at $15. It had no luck last time out when caught on the inside with nowhere to go, so expect a much better run here.

Trainer of Japanese runner Fame Game isn’t worried about what weight his runner gets, instead he has warned rivals of its ability to stay.
Yoshitada Munkata said Fame Game was capable of winning the 2015 Caulfield Cup, but the six-year-old is better suited to running the 3200-metre distance of the Melbourne Cup.

It is currently an $8 chance at CrownBet.com.au and punters should be confident given the recent success of Japanese runners during the Melbourne spring carnival.

“Because he stays all day, the longer the distance the better, so I would have to say the Melbourne Cup is his best chance,” Munakata said.

“Obviously he raced in Japan with 57kg many times, so I’m sure he will be all right,” he said. “We got him really fit in Japan, so fitness-wise I don’t think we need many strong gallops. We just have to keep his condition well and keep him happy.”

Fellow Japanese runner Hokko Brave has also been well supported in the market and trainer Yasutoshi Matsunaga is happy with how it is working.

“We decided to give him two days off because it was a long trip, he didn’t lose weight or become stressed, but the assistant trainer and my staff didn’t like how he was going,” Matsunaga said.

He added that Hokko Brave was sent to Australia at only 80 percent fitness, but “we will have some chance of winning the Caulfield Cup”.

Hokko Brave is currently a $15 chance at Sportsbet for the 2015 Caulfield Cup.