Dubbed ‘Australia’s International Racecourse’, Flemington is home to the Melbourne Cup – the race that truly stops a nation.

The first ‘official’ racemeeting in Victoria took place not long after the settlement of Melbourne, at Batman Hill (now the site of Southern Cross railway station) on March 6 and 7, 1838. Two years later, beginning Tuesday March 3, racing was transferred to ‘Saltwater Flat’ on the banks of the Maribyrnong River, and the events were run over three days. 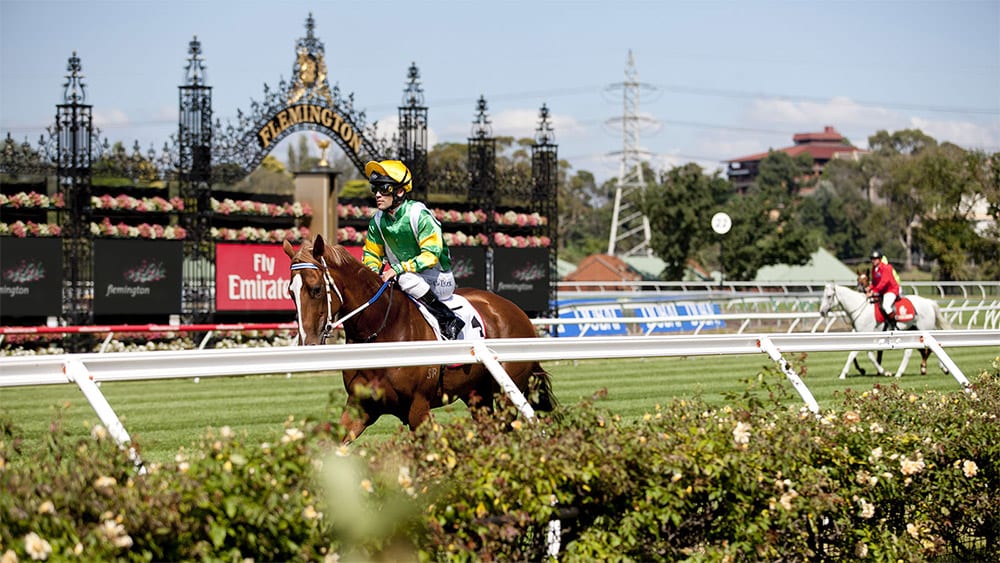 The move was surrounded by controversy; there was an outcry, suggesting Saltwater Flat was too far from Melbourne Town.

Flemington was first known as the Melbourne Racecourse. The original approach road from Melbourne crossed Moonee Ponds Creek at Mt Alexander Road and passed through the property called Flemington owned since 1840 by James Watson. He built his Flemington Hotel there in 1848 and a small township grew up around it. In 1840 he was married and his new-wife Elizabeth came from a place named Flemington in Morayshire, Scotland. It was not, as was long thought, named after early settler Robert Fleming, whose home was in Brunswick. The name Flemington for the racecourse was commonly used by the late 1850s.

The first racing club was the Port Phillip Turf Club, but the course was then leased to the Victoria Turf Club (VTC) in 1848 and it ran the first Melbourne Cup there in 1861. The Victorian Turf Club was soon dissolved because of massive debts and the Victoria Racing Club was formed in 1864, inheriting some of the VTC’s races including the Melbourne Cup.

In 1871, the “Victoria Racing Club Act” was passed, giving the VRC legal control over Flemington.

Flemington truly has the finest tradition of all Australia’s racing clubs. The influx of people and wealth that came with the 1850s gold rush, which helped establish the initial facilities at Flemington, also brought with it a strong philosophy of striving for excellence. The first VRC Secretary, the ‘indefatigable’ Mr R.C. Bagot, after whom the New Year’s Day Bagot Handicap is named, introduced training facilities and continually upgraded both public and administration facilities. 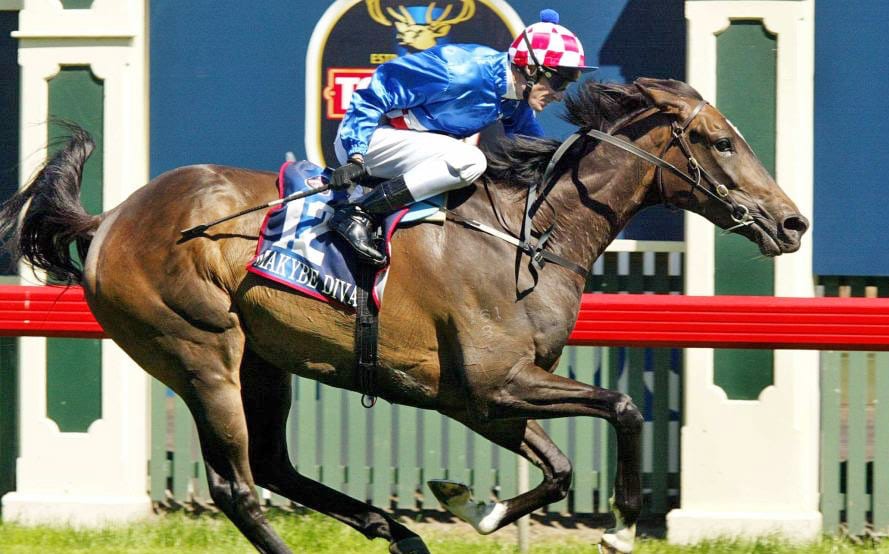 A spacious pear-shaped course with sweeping turns and long straights, Flemington also boasts an integrated 1200-metre straight course, often referred to as ‘the Straight Six’ (because of the old six-furlong measure).

Makybe Diva, who won more than A$14 million in prize money, wrote herself into racing history in November 2005 when she became the first horse to win three Melbourne Cups. She was immediately retired from racing as Australia’s greatest ever prizemoney earner and the highest stakes winning mare in world thoroughbred history.

The largest weight carried by a winner was Carbine in 1890, when he out-slugged 38 rivals, lugging an incredible 65.6 kilos (or 10 stone, 5lbs). The people’s champion, Phar Lap, who won the Cup in 1930, will always remain in most Australians’ minds alongside national sporting heroes such as Sir Donald Bradman.

The first Northern Hemisphere-trained horse to win was the Irish stayer Vintage Crop in 1993. 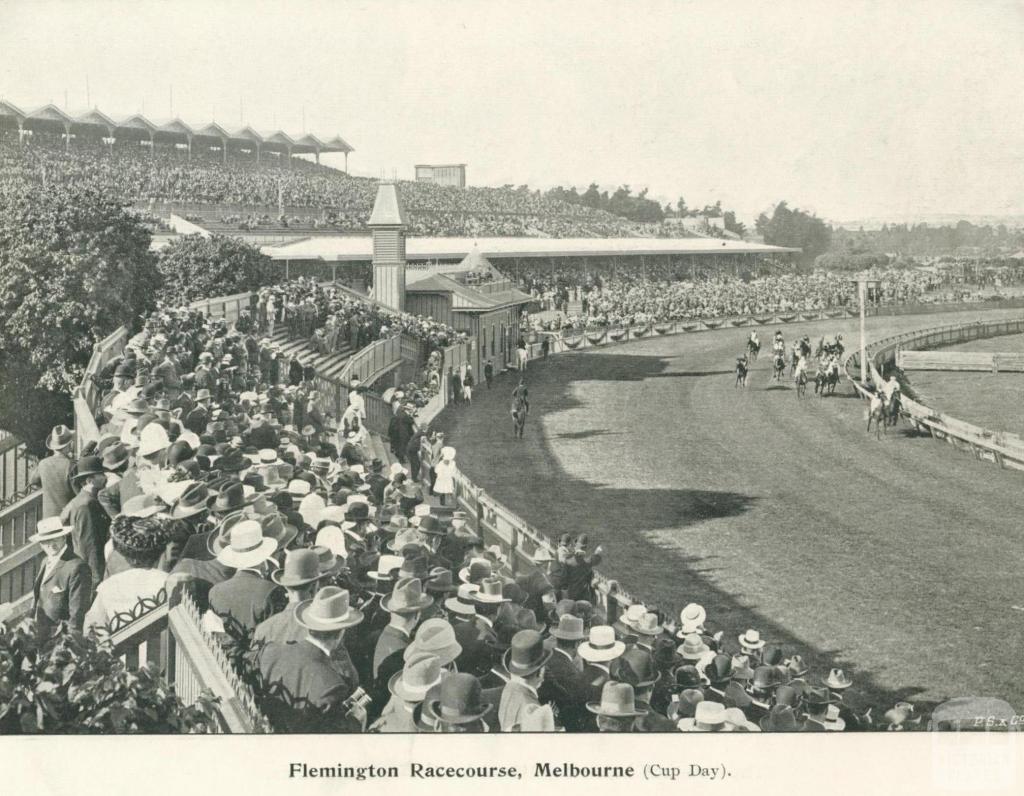 The deeds of Makybe Diva in winning three consecutive Emirates Melbourne Cups, as handicaps, had been hitherto considered impossible. No mare had ever won two Cups before Makybe Diva, and she set a weight carrying record for a mare (to win) in the 2004 Cup, and then increased that benchmark in the 2005 race.

The master trainer JB (Bart) Cummings easily holds the record for the number of Melbourne Cup winners, with twelve. Harry White and Bobbie Lewis share the riding honours with four wins each.

The Melbourne Cup is run over 3200m (2 miles prior to 1972) under handicap conditions. Entries for the race close in the first week of August.

The Melbourne Cup is affectionately referred to as “the race that stops a nation”. In all parts of Australia, people stop what they are doing shortly before 3pm on Cup Day to watch or listen to the race, via television, internet or radio. In Melbourne itself, the day is declared a public holiday, and upwards of 100,000 people usually attend Flemington Racecourse. The race is televised live to an audience of about 700 million people worldwide.

Since 1993, horses trained in the northern hemisphere have travelled to Melbourne each year to compete in the Melbourne Cup. In the very first year of this pilgrimage, the Irish-owned and Dermot Weld-trained Vintage Crop changed the Melbourne Cup forever by winning the great race. A second placing by Godolphin’s Central Park, in 1999, was matched by an equally bold second by that stable’s front running stayer Give The Slip in 2001. Third placings by English trained Persian Punch in 1998 and 2001 were extremely brave performances.

Then in 2002, the same combination of Irish owner and trainer broke through to repeat their 1993 triumph, with the free running stayer Media Puzzle. The invasion continued in 2003 when England’s Jardine’s Lookout finished on hard for third, while in 2004 it took the best staying mare in the world to prevent Ireland’s Vinnie Roe from lifting the Emirates Melbourne Cup out of Australia again for Dermot Weld.

Since then, entrants from Japan, USA, Ireland, England, France, Germany, UAE and Hong Kong have joined approximately 250 Australian and New Zealand horses in the list of nominations. Plans by international connections to bring horses to Melbourne are decided upon when handicap weights are announced in early September. 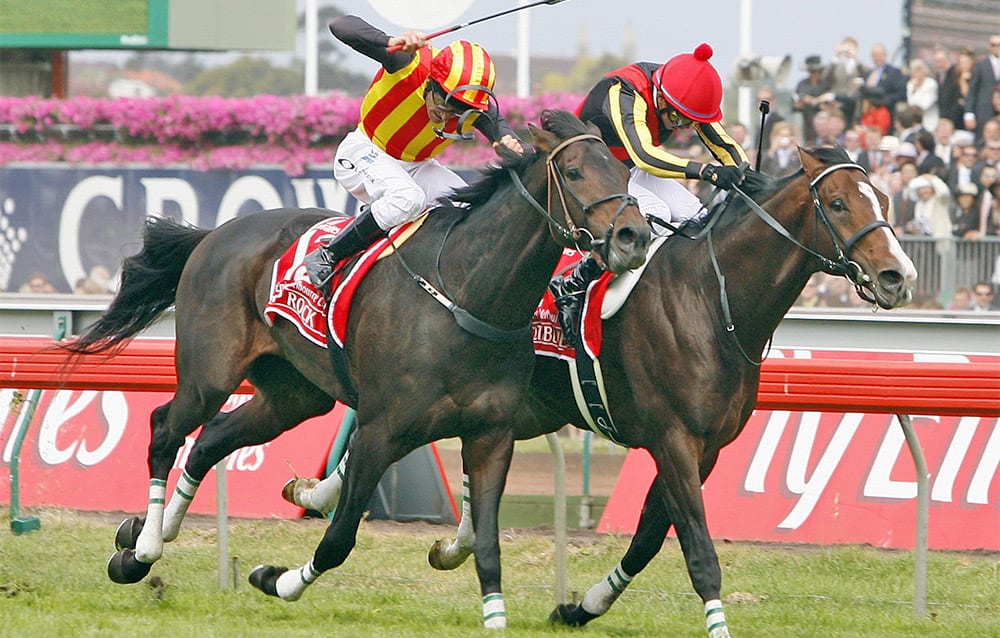 In 2006, the Japanese owned and trained pair Delta Blues and Pop Rock almost dead-heated for the Melbourne Cup, with the former victorious. With more than four lengths to the third horse, the Japanese runners lifted the Cup to a new level as the stayers championship of the world, and brought international racing to the forefront like few others before them.

Americain gave France it’s first victory in the Melbourne Cup of 2010 with Gerald Mosse the first French jockey to cross the line in the top spot on the first Tuesday in November. The 2011 Cup went to another French star when Dunaden thundered home to triumph.