Horse racing is one of Ireland’s top sports to bet on in 2022, with the thoroughbred racing scene one of the most affluent in the world. Most licensed betting sites in Ireland will boast markets on the Irish racing, while International punters will also be able to wager on the Irish races. Our guide to horse racing in Ireland will teach you everything you never knew you needed to know.

This article looks at the various elements of Ireland horse racing. The prosperity of the sport is linked to Ireland’s economic well-being. There was a boom during the prosperous years of the Celtic Tiger economy which saw economic growth between 1994 and 2007. There has been a recovery but the sport is heavily dependent on a small number of owners. Ireland is still seen as a relatively wealthy country and the love for horse racing should ensure ongoing investment in the sport.
Introduction to Ireland Horse Racing

Horse racing is hugely popular for betting in Ireland. It is also a major spectating sport in the country but participation overall has dropped since the demise of the Celtic Tiger economy in 2007. However, racing is still a major part of the Irish sporting culture which can be parochial. Horse racing takes place predominantly in the Republic or southern Ireland. There are 26 racecourses in the whole of Ireland of which just two are located in the north of the country, in the province of Ulster. It is one sport in which the administration is based on the whole of Ireland and not split by the north and south. Racing is an important part of society in Ireland which is known for being a horse nation. 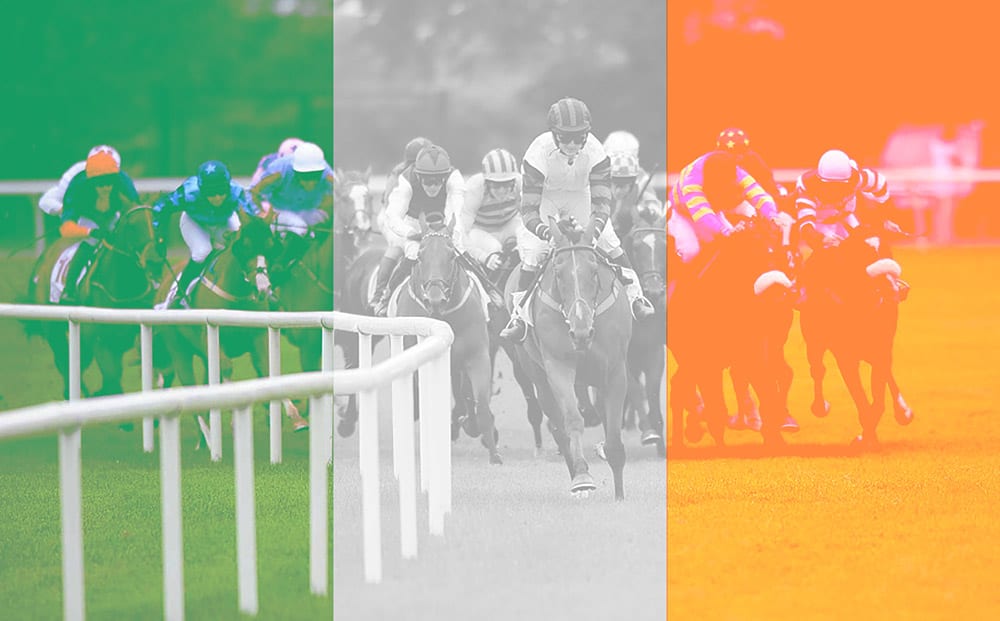 There are three key bodies in Irish horse racing which have a number of funding sources, including the Government of the Republic of Ireland and betting tax. Since 2001 Horse Racing Ireland has promoted racing and breeding. The Turf Club was formed in 1790 and regulated horse racing in Ireland. However, from January 2018 the Irish Horse Racing Regulatory Board has performed this role. These bodies incorporate Flat and National Hunt racing. There are also a number of associations which represent the various participants of the sport in Ireland.
How Does Ireland Horse Racing Work?

The Irish horse racing industry currently contributes about €1 billion to the economy each year. The sport employs over 14,000 people and plays its part in international racing and breeding. Here are the three elements that make Ireland horse racing work:
Types of Racing

There are three types of Ireland horse races:

Point-to-point racing at over 100 meetings on farmland each year is a schooling ground for some National Hunt horses who then run in conventional jumps races in the UK and Ireland.

All Ireland horse racing fixtures take place under one of these codes.

The Irish horse racing industry provides racegoers with a variety of tracks, major races and annual festivals on the Flat and over jumps. Attendances suffered with the collapse of the economy in 2007 after 13 years of economic growth. There has been something of a recovery and racing still offers spectators and television viewers a diverse and exciting sport. 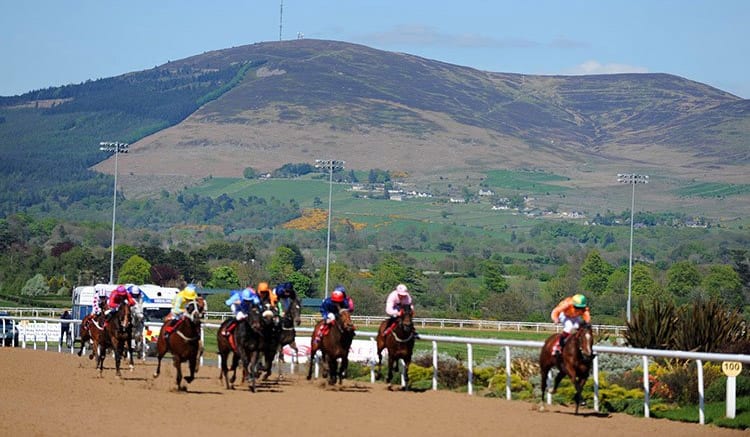 There are several major annual racing festivals and biggest carnivals, on the Flat and over jumps:

The Irish Derby Festival is a three-day meeting at the end of June at the Curragh racecourse within easy travelling distance of Dublin. The highlight of the meeting is the Irish Derby which is the most prestigious of Ireland horse races on the Flat. There is a three-week gap between the race and Epsom Derby so it is feasible for horses to appear in both races.

The Galway Summer Festival is a mixed meeting so features races on the Flat and over jumps. It is a seven-day meeting at the end of July and start of August. The meeting is a huge occasion for betting and a holiday destination for many Irish racegoers. The racing is mainly average in terms of quality but the Galway Hurdle is a much sought after race that offers lucrative prize money.

Irish Champions Weekend in September features Flat fixtures on Saturday and Sunday at Leopardstown and the Curragh. The Irish Champions Stakes is the Group 1 highlight on the first day and the Irish St Leger is the main race on the card the following day. The meeting is the highlight of the last weeks of the Flat season in Ireland.

The Dublin Racing Festival over two days at Leopardstown in February first took place in 2018. It provides key trials for the Cheltenham Festival and valuable races in their own right. The meeting features nine Grade 1 races, including the Irish Gold Cup and Champion Hurdle. The festival does not attract many runners from Britain but that could change as the concept becomes established.

The Punchestown Festival is Ireland’s equivalent of the Cheltenham Festival. It is a five-day meeting at the end of April and beginning of May. The fixture marks the end of the Irish jumps season and the jockey’s and trainer’s championships. The festival features Ireland horse races over hurdles and fences, cross-country races and a champion bumper.

Ireland’s mid-season championship races take place at the Leopardstown Christmas Festival over four days at the end of December. The leading trainers target their best horses at Grade 1 hurdle races and steeplechases. Many Cheltenham Festival prospects appear at the meeting and leading contenders emerge from key trials for Cheltenham in March. 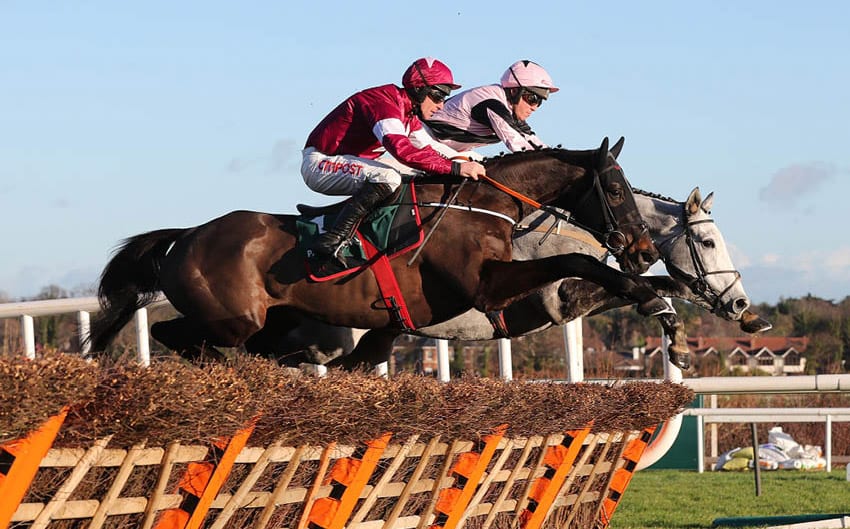 Ireland horse racing and the media

Followers of racing in Ireland have access to a vast range of horse racing online information. The most visited websites are Sky Sports, Racing TV, Sporting Life and BBC. All UK-facing bookmakers accept players from Ireland. They can activate any welcome bonuses and benefit from ongoing promotions for existing customers. Some online sportsbooks provide live streaming of Irish racing. Ireland horse racing betting sites offer odds on racing in the UK and Ireland.

Ireland’s national public broadcaster, RTE, shows live horse racing on one of its channels. As with other media, racing is competing for coverage with soccer, hurling and football. The sole UK and Ireland subscription channel broadcaster of Irish racing is Racing TV. However, the channel also covers racing from 35 tracks in the UK and North America and France in addition to Ireland horse racing meetings.

Betting on Irish horse racing in 2020

Betting is intrinsically linked to horse racing in Ireland. There is a healthy ante-post market, especially for the championship races at the Cheltenham Festival. Gambling is regulated in Ireland and online betting has operated within licensing regulations since 2015. However, the Gambling Control Bill that specifically focuses on online gambling has been subject to delay. Here is specific information about the key elements of betting on horse racing in Ireland:

Potential horse racing bettors in Ireland can choose from a number of methods. There are licensed betting offices in the major towns and cities that accept cash bets. Racegoers can place bets with on-course bookmakers and the Irish Tote. A number of independent Irish bookmakers offer an online Ireland horse racing betting service.

Boylesports and Paddy Power are existing online bookmakers that were founded in Ireland. Boylesports is the largest independent Irish bookmaker and Paddy Power joined forces with Betfair in 2016 to create Flutter Entertainment. These two operators are amongst the best Ireland horse racing bookmakers. The leading UK-based betting brands, such as Ladbrokes, William Hill and Coral, accept players from Ireland.

Online bookmakers offer welcome bonuses and ongoing bonuses for existing customers in Ireland. Welcome offers can be a deposit bonus, match deposit bonus and match bet bonus. Free bets are subject to staking requirements and odds restrictions. Once a bettor has met the qualifying Terms & Conditions, any free bets are available for betting on horse racing in Ireland. However, any winnings do not include the free bet stake. The best free bets and best bonuses are available at bookmakers who operate in Ireland.