Royal Ascot is the most prestigious Flat meeting in British horse racing. It is as much a social occasion as a sporting event, with strict dress codes in some of the enclosures and the Queen of the United Kingdom in attendance each day. The titles of the 30 races have a Royal connection and the Queen is a patron of Ascot Racecourse. In terms of attendances, Royal Ascot is the most popular race meeting in Britain. Around 300,000 turn up to the Berkshire track over five days in June each year, which trumps the 250,000 or so who attend the four days of the Cheltenham Festival in March.

There are many on-course bookmakers at Royal Ascot, while high-street betting offices supply odds on every race. However, online bookmakers offer the quickest and easiest way to bet on Royal Ascot. Our featured bookies are all properly regulated and offer mobile betting on Android and iOS devices, so tap the buttons above to check out the latest Royal Ascot odds online.

Royal Ascot is the biggest race-day betting meeting of the Flat season. Some of the Group races can be relatively uncompetitive, but most have an open betting market. Since 2010, Aidan O’Brien and Ryan Moore have dominated the Group races, but the odds reflect that dominance. Frankie Dettori is the most successful current jockey at Royal Ascot, but his popularity with casual punters means his mounts do not always offer the best value for money.

Royal Ascot ante-post betting is not at the same level as for the Cheltenham Festival. Many of the races feature young horses that only become leading contenders during the season of the meeting. The biggest Royal Ascot ante-post market is for the Gold Cup – a race for horses aged four and older that has a history of producing multiple winners. Stradivarius won the Gold Cup in 2018 and 2019, aged four and five. Yeats won his fourth Gold Cup as an eight-year-old in 2009, so potentially Stradivarius could still be contesting the Gold Cup in 2022.

Royal Ascot is huge for betting and creates the most turnover and bets of any Flat meeting in the UK and Ireland. Online bookmakers try to attract new customers before and during the meeting, while they also increase their promotional material to maintain the loyalty of existing players. Here is a typical package of promotions that bettors can enjoy during Royal Ascot:

Bookmakers introduce the non-runner/no bet (NRNB) concession for Royal Ascot a few weeks before the meeting. They return the full stakes on a backed horsed when that horse is withdrawn from a race at Royal Ascot. When normal ante-post betting rules apply, such horses count as runners and backers lose their stakes.

Bookmakers give the Best Odds Guaranteed (BOG) promise for each day of Royal Ascot. If a bettor takes an early price or board price and the official starting price (SP) is different, bookmakers settle winning bets at the best odds. This concession applies from 9am on race day and there is an upper limit on what punters can win as a result of BOG.

The standard place terms for any handicap at Royal Ascot with a field of 16 or more runners are one-quarter the odds for the first four places. Some bookmakers offer extra places, which means each-way bets are winners for horses that finish in the top five or six. If any non-runners take the field to less than 16 runners, this concession does not apply.

Money Back If Second To SP Favourite

This is a popular betting promotion during the Royal Ascot meeting. If you back a horse to win and it finishes second to the SP favourite, you get your bet back. The refund often comes in the form of a free bet and the maximum is fixed at a certain amount, usually £25. This refund applies to selected races at Royal Ascot and is often on the first race of the day.

This is my table

There are 30 races over the five days of Royal Ascot, which is due to take place from Tuesday, June 16 to Saturday, June 20 in 2020. Here is a summary of the proposed race programme:

The quality of Royal Ascot is indicated by the fact that 19 of the 30 races are at Group level. The sport is of sustained excellence and attracts the best Flat horses trained in Britain, Ireland and several other racing jurisdictions. Other international fixtures, such as the Dubai World Cup and Breeders’ Cup, offer more prize money, but Royal Ascot combines riches, prestige and quality like no other meeting. 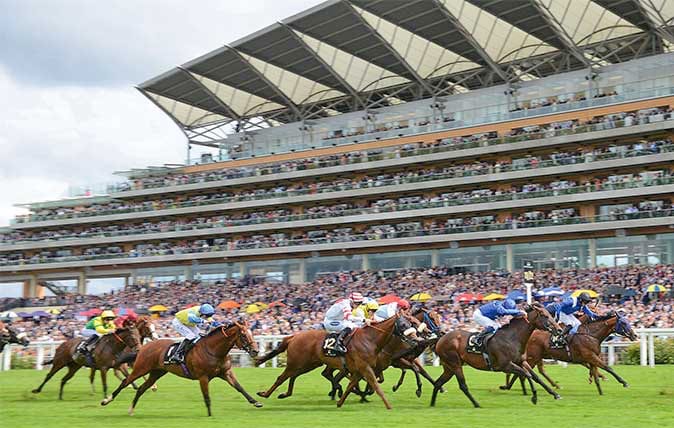 Here are the race cards for each day of Royal Ascot 2020. In order to make up for some of the racing lost during the COVID-19 outbreak, this year’s Royal Ascot schedule features 36 races instead of the usual 30.

Ascot Racecourse was founded by Queen Anne in 1711 and has always had Royal patronage. The high-summer meeting in June was first staged as Royal Ascot in 1911. The Royal Procession takes place before racing each day.

Royal Ascot has now become an international racing occasion. The prestige and prize money for the major Group races now attract horses from the rest of Europe as well as Australia and the United States.

In 2006, the Queen opened the new grandstand, which is one of the best spectating facilities in world sport. In 2020, viewers of the free-to-view channel ITV can watch every race live on television.

Ascot Racecourse is situated in the county of Berkshire, around 36 miles south-west of the centre of London. It is a mixed track, which means there are both Flat and jumps fixtures during the season. The Flat course is right-handed, triangular and about one mile and six furlongs in length. There is a round course that descends from Swinley Bottom and joins the Mile Course from a separate chute. The course rises at the turn, leading to a run-in that is about three furlongs in length.

Here are the leading Royal Ascot jockeys over the last 10 years:

Here are the leading Royal Ascot trainers over the last 10 years:

Ryan Moore is Aidan O’Brien’s retained jockey so rides most of the trainer’s runners in Group races. Moore has been the leading jockey at Royal Ascot in eight of the last 10 years, while O’Brien has won the trainer’s title in all but three years in the last decade. The combination represents the powerful Coolmore syndicate, so we can expect the team to deliver several winners at Royal Ascot in 2020.

Here are the answers to the most common questions about Royal Ascot:

What is Royal Ascot?

Royal Ascot is a Flat meeting over five days. It is known as the Royal meeting due to the patronage of the Queen of Great Britain, who attends on each day.

When is Royal Ascot?

The 2020 Royal Ascot meeting is scheduled to take place from Tuesday, June 16 to Saturday, June 20.

Where is Royal Ascot?

Royal Ascot takes place at Ascot Racecourse in Berkshire in the south-east of England, 36 miles from the centre of London.

Why is Royal Ascot so popular?

Royal Ascot is popular because it is as much a summer social occasion as a race meeting. There is a Royal Procession along the track in front of the enclosures before racing each day.

Who appears at Royal Ascot?

The 19 Group races attract the best horses trained in Britain and Ireland as well as star runners from Australia and the United States.