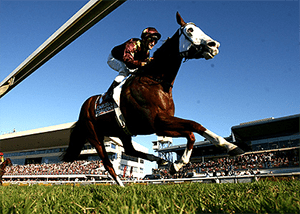 THERE are three Group 1’s at Doomben this Saturday, capping off a successful Brisbane Winter Carnival which has seen Group 1 races go to Porchinet, Hot Snitzel, Boban and Winx in the Queensland Oaks.

This week we get a trifecta of Group 1’s with the $2 million Stradbroke Handicap, highlighting a wonderful card of races that also includes the Queensland Derby and The TJ Smith over 1600 metres.

We have all the latest news, odds and updated markets for all three Group 1 races to end the main part of the Winter Carnival.

Before you place a bet at Doomben this weekend, think about the money! If you sign-up at Crownbet.com.au, you can get your hands on up to $650 in bonus bets!

The Robert Smerdon-trained Lumosty has been denied a guaranteed spot by handicappers for the 2015 $2 million Stradbroke Handicap this Saturday, sending punters into turmoil.

There has been plenty of futures money spent on the three-year-old which has won its last two races in Melbourne impressively.

Despite not making the initial field of 16 runners (Lumosty sits 17th in the running order) bookmakers still have the filly as the $5.50 favourite – projecting that there will be scratching before Saturday.

Punters will now get their money refunded if the daughter of Fastnet Rock doesn’t start, therefore the $5.50 on offer looks like good value. That price will likely drop to around $4.50-$5 if it makes the final 16.

Support has come for the Peter and Paul Snowden-trained Charlie Boy, which flashed home for second in the Group 1 Doomben 10,000.

The four-year-old drops to 54kg with Craig Williams in the saddle and has attracted plenty of money at $6 with Sportsbet.com.au.

Other supported runners include New Zealand’s Sacred Star, Generalife and Knoydart at $9 which will be one of James McDonald’s last rides before heading to Europe.

The 1600-metre event is the last Group 1 for two-year-old’s this season and Waller is looking to go one better after both runners finished runner-up.

“I’m quite confident,” Angland said. “He’s done everything you look for in a two-year-old moving forward to the grand final.”

Angland didn’t ride the son of Hincinbrook last time out at Rosehill, but was pleased by its effort two back at Canterbury.

“He surprised me by what he did first-up, how well he put himself into the race,” he said.

“Before the race I would have said he will be doing his best when he gets to a mile and I still believe that.”

The barrier draw of 10 is cause for concern for Angland.

“Unfortunately we haven’t drawn the best and it’s his first time at a mile so it’s going to be a big ask, but looking at him I think he’s well above average,” he said.

The Andrew Campbell-trained gelding opened at $3.30 in the betting, but after receiving the inside draw its price has dropped down to $2.80 with Sportsbet.com.au.

Master Of Arts has attracted attention after a luckless display in the Grand Prix. Jockey Glen Boss takes over the riding duties and it currently sits at $6, but its price did drop to $5 earlier in the week.

Other strong market chances include last start Grand Prix winner Upham ($8), Sadler’s Lake ($11) and Spur On Gold which opened at $21 and has dropped to $17.