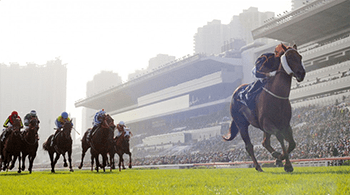 ROYAL Ascot barely needs hyping up to begin with, but the mouth-watering battle that will ensue between Solow and Able Friend has punters chomping at the bit.

Both superstars will contest the Group 1 Queen Anne Stakes on June 16 and the bookmakers are finding it hard to split the two.

Sportsbet.com.au currently has French champion Solow as the joint $2.50 favourite with Able Friend, after money came for the world’s top rated miler Able Friend after it got out to $3.10.

Solow recently scored back-to-back Group 1 wins and is undefeated in its last six wins, but it only had to face three other rivals last time out at Longchamp.

Able Friend on the other hand has four Group 1 victories to its record and its last defeat came seven starts back at Sha Tin.

Trainer John Moore said the five-year-old trialed well at Sha Tin on Tuesday morning with Joao Moreira in the saddle.

“Joao said he’s 85-90 percent there now and with two weeks up our sleeves it’s just right on schedule with how I’ve trained him for the previous big races,” Moore told the Hong Kong Jockey Club.

“He’s at the end of his prep so when we get to England it’ll just be a case of fine-tuning him.”

Champion jockey Joao Moreira has ridden plenty of good horses, but he believes Able Friend is the best he has ridden.

“I’ve said before, he’s the best horse that I’ve sat on top of, and I’ll say it again,” Moreira said.

“Based on Solow’s win in Dubai he looks like he’s the main danger to our horse…but at the same time I’m full of confidence for my horse, he’s been good to me and I have a lot of faith in him.”

The Australian-bred son of Shamardal will fly out to England this Saturday ahead of the clash with Solow and the French horses trainer is already staking his claim.

“This horse is a champion, who goes on any ground and who always runs his race,” Freddy Head said.

John Moore was quick to provide rebuttal when he talked to the South China Morning Post.

“It’s everyone’s dream to have a horse that goes to number one on the planet. It’s time to prove that the world champion middle distance horse is right here in Hong Kong.”

Able Friend currently stands as the Longines World’s Best Racehorse on 125 points, equal with U.S. four-year-old Shared Belief and one point ahead of Solow and Triple Crown hopeful American Pharoah.