Punters hurting after $1.10 failure at Gosford 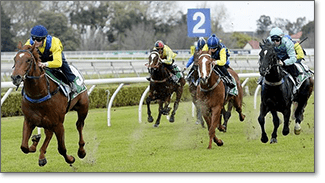 PUNTERS were left with empty wallets after $1.10 favourite Sooboog finished seventh in the Redeye Constructions Maiden at Gosford last Thursday.

The son of Snitzel was such a short favourite due to the form surrounding its first two career starts. The John Hawkes-trained runner was the CrownBet.com.au $1.65 favourite on debut in the Listed Breeders Plate, but lost out to 2015 Golden Slipper winner Vancouver.

It then ran as the $2.60 favourite in the Group 3 Kindergarten Stakes where it finished sixth behind Furnaces, prompting the trainers to send it to the spelling paddock.

Sooboog was given a ‘soft kill’ at Gosford on Thursday and the punters thought it simply wouldn’t get beaten, but there was some controversy prior to the start.

Sooboog become fractious behind the barriers and was vet-checked, but passed fit to run. It was subsequently slow out of the gates, raced three-wide and never picked up in the straight.

Racing NSW steward Ray Livingstone stated that Sooboog had pulled up sore in the off-hind leg and with blood in one nostril.

The online racing forums were exploding with many posters asking the question how a horse beaten in its first two starts could start at $1.10. Some were saying the horse should have been scratched at the barriers, considering how much the horse could potentially be worth.

The horse must now get a vet clearance before being allowed to race again.

2015 Golden Slipper winner Vancouver kicks off its new campaign in the Group 3 San Domenico Stakes at Rosehill this Saturday and the camp can’t find a reason as to why it will get beaten.

“He won’t be a run short, you are more a chance of getting beaten and feeling a hard run if they are not fit.

“This horse’s mission first of all is to try and win the Golden Rose so he’s got to be pretty close to the mark now.”

Vancouver ($2.40 at Bet365.com) has been compared with the former Gai Waterhouse-trained Pierro, which won the 2012 Golden Slipper.

“They’re quite similar,” Newnham said. “They’re similar in their mannerisms and are lovely big determined colts.

“They also have similar attributes in as far as coming through their two-year-old year unbeaten.

“Both are very relaxed in their work and have terrific attitudes and a great lung capacity.”

Vancouver heads the betting for the Golden Rose at $3 with most bookmakers.

In-form jockey Tye Angland is coming off a winning treble at Canterbury and his book of rides this Saturday at Rosehill should give his followers plenty of confidence.

Angland scored the ride of Japonisme in the San Domenico Stakes. The Chris Waller-trained runner is unbeaten in three starts this campaign and will run as a $5 chance with Sportsbet.com.au.

“His fitness will definitely play into his favour,” Angland said.

“It’s not going to be easy but he’s been racing very well and I’m sure he’ll run a very game race if not win.”

“I thought he trialled really well,” Angland said. “His first trial was quite disappointing just looking at it but for a horse going up to 1800 metres first-up I thought it was a pretty ideal hit-out.

“He’s quite dour, he’s a European stayer but he gave me the feel that he’ll be competitive on Saturday.”

Orbec is currently paying $13 with CrownBet.com.au for the Merrylands RSL Club (1800 metres) at Rosehill.

The unbeaten Petits Filous opened as the $2.25 favourite in the Quezette Stakes, but punters have bet it into a much shorter price.

Its debut win also came at the Valley where it won by six lengths and it drops down to 55kg for this run with Damien Oliver in the saddle.