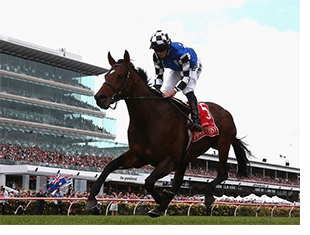 2014 Melbourne Cup winner Protectionist will trial at Newcastle on Monday in preparation for a lengthy spring campaign.

The Kris Lees-trained runner hasn’t impressed since winning the Melbourne Cup last November, with the most disappointing effort being a 16-length defeat in the Group 1 Sydney Cup.

Lees stated that it has worked well throughout the winter and expects to see the son of Monsun return to its best.

“We’re happy with him, but we won’t know until we put him under raceday pressure. All positive signs so far,” Lees said.

“I don’t think you can really tell until raceday.

“He had a six week spell, he certainly appreciated that and it’s something he hasn’t done since he arrived here.”

Protectionist will trial on Monday ahead of the Chelmsford Stakes. Following the Chelmsford, Lees said it will likely step up to 2000 metres in the Group 2 Hill Stakes before traveling to Victoria to prepare for the Cup.

“We’ll possibly stay at home for the Hill Stakes and then head down to Melbourne,” Lees said.

“Realistically, the 2015 Melbourne Cup is probably the only real race we can aim for, he’s every bit of a two-miler.”

Protectionist is currently $21 at Sportsbet.com.au for the 2015 Melbourne Cup.

The David Hayes-trained Criterion finished down the track in the Juddmonte International at York, but it wasn’t the biggest story out of the race.

Hot favourite Golden Horn suffered its first career defeat when Arabian Queen got the final stride – winning by a neck over Golden Horn and The Grey Gatsby.

The David Elsworth-trained runner was the only filly in the race and jockey Silvestre De Sousa complimented its fighting spirit.

“I was doing my own fractions and not looking at the pacemaker,” De Sousa said.

“She’s not very big but she has a big heart.

“Golden Horn got a little bit ahead of me but she just battled back.”

Golden Horn’s rider Frankie Dettori said he knew his mount was in trouble throughout the run.

“The horse was more keen than usual today,” Dettori said. “He was going to the King George and missed it so came here a bit fresh today.

“I was expecting a lot of energy trying to hold him and he couldn’t use his turn of foot in that ground at the end.”

Criterion’s co-trainer Tom Dabernig said he was disappointed with the Australian’s effort, but they are looking forward to bringing it home for the upcoming spring carnival.

“He lost his position early in the race, he got a bit of a bump, and the jockey [William Buick] took off a bit early,” Dabernig said.

“I wasn’t overly rapt in the ride but I think he ran well.

“We’re yet to hear how he pulled up from the run but the plan would be that he’ll now head back to Melbourne through the quarantine to maybe run in the Caulfield Stakes and then head into the Cox Plate ($11 at CrownBet).”

Punters can bet on the York carnival which continues this week at CrownBet.com.au.

Remember the Gai Waterhouse-trained The Offer? It was once a Melbourne Cup favourite after winning the Sydney Cup, but failed to show any ability in Melbourne.

The Offer resumed on Thursday in the Listed Hawkesbury Rowley Mile against a field of six runners and it won impressively with 61kg on its back.

The odds of $8 looked like good value for the former import and it was good enough to fight off the challenge from Dragon Flyer which carried only 54kg.

Jockey Blake Shinn said the tactics didn’t go to plan, but its class got it over the line.

“It didn’t work out as Gai had hoped,” Shinn said. “We wanted to be positive early but it was evident I couldn’t be there so with the weight I just let him settle.

“I made a decision to get on our bike and knew he was a staying horse with stamina on our side.”

Sportsbet have The Offer at $34 for the 2015 Melbourne Cup and it is expected to contest the major Group 1’s this spring.

The David Hayes and Tom Dabernig-trained Stay With Me has royal breeding – out of Miss Finland – and punters were rewarded for sticking with the filly at Pakenham last Thursday.

The three-year-old was resuming after a two-start campaign which featured a second placing to Group 1 winner Pasadena Girl.

Stay With Me was at $1.70 with Bet365.com and its win confirmed a start in the upcoming Thousand Guineas where it is currently a $26 chance with bookmakers.

“I thought Dwayne rode her confidently,” Dabernig said. “She was deep without cover but she was kept out of trouble and she really let down strongly in the straight.

“She probably just clocked off late when she hit the front but there’s a lot of improvement left in her.”

Dabernig said it would handle the distance of the Thousand Guineas, providing its manners improve with experience.

“She’s always shown us that she’s a high-class horse,” Dabernig said. “She’s a real athlete and she’s in at the right time of the year.”