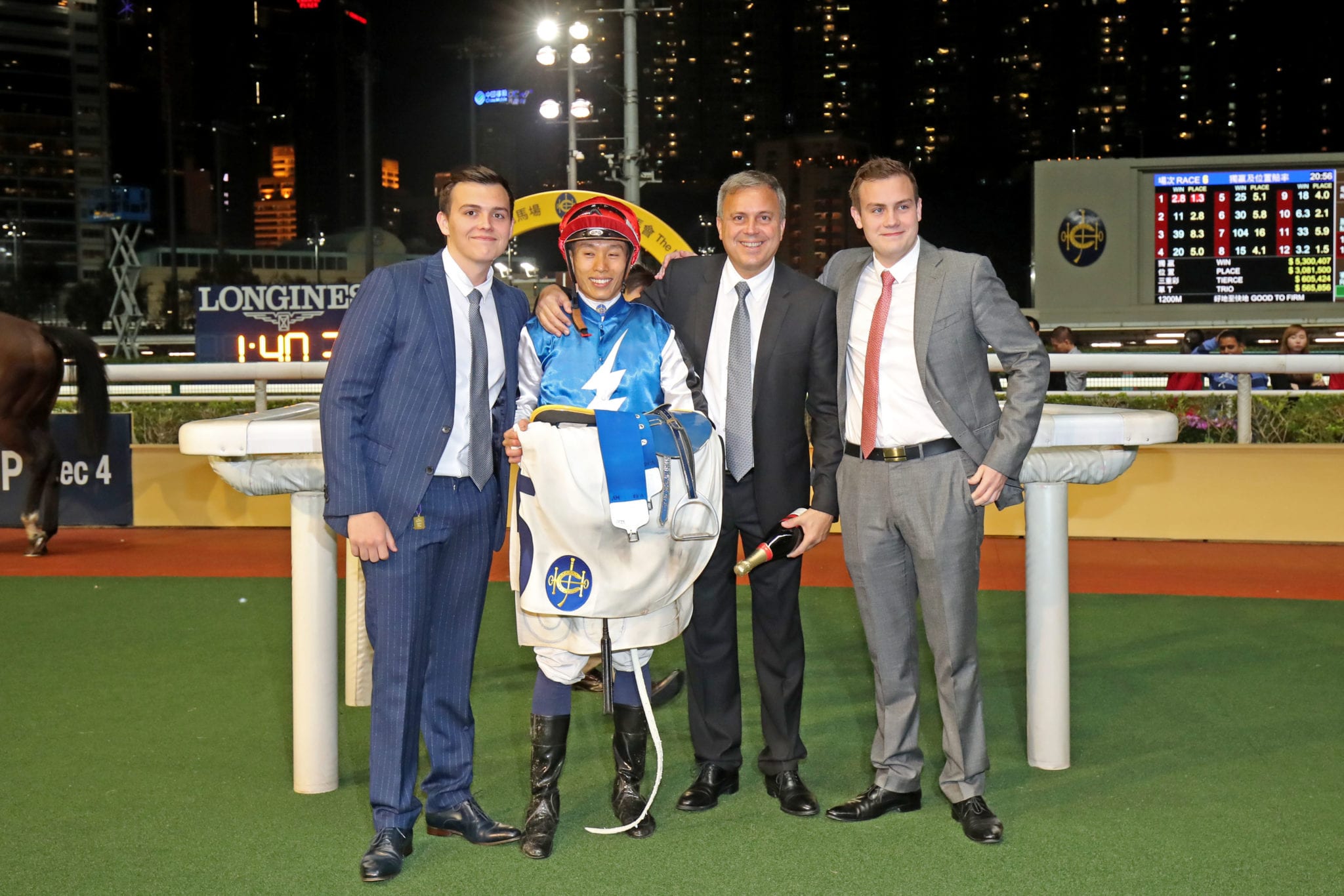 Three champion trainer titles; a raft of major race winners at home and in Singapore and a surname synonymous with Hong Kong racing only scratches the surface of the story of Caspar Fownes.

“Born in Calcutta, India; 1967; August 12th,” Fownes replied when I asked his place of birth – seemingly emphasising the country and ever so slightly delivered in a fashion which might mimic a British regimental roll call.

His parents Lawrie and Pamela, while of British heritage, were also born in India. His father excelled as a trainer there and later in Hong Kong. His grandfather and great grandfather were military men who’d worked with horses. “I’m British, I have a British passport,” says Fownes, although his former assistant Chris So – now a trainer – says he’s “more Chinese.”

Caspar was 13 years old when his family moved to Hong Kong. Thus he’s lived all his life in domains once under British rule but never in Britain and he remembers well his somewhat unusual upbringing.

“I lived in India up until the time we moved to Hong Kong,” he recalled, “I went to school there. In my last year I went to boarding school at St Joseph’s up in Darjeeling in the Himalayan range. It was beautiful up there. You’d wake up to the beautiful mountains.

“You couldn’t see Mount Everest but you could see the rest of the range. I have great memories of India. What a great country, lovely people, it’s all about family. They raise you right there; you learn the right things in life to set yourself up and be good to people. You learn right from wrong. Those were the things that I took with me from India.”

Much of that is now manifest in how he conducts his racing operation, as it was with his father’s, focused on integrity and family. His sons Ryan, 21, and Ronan, 19 next week, are following him just as he followed his father who trained 637 Hong Kong winners in 22 seasons up to his retirement in 2002/03.

In fact, it’s an extended Hong Kong racing family with Fownes’ sister Fenella working with the stable until recently and his Melbourne-born wife Alix being the daughter of another long-term and successful Hong Kong trainer Bruce Hutchison (who died in 2005) while her brother Clint is a former Hong Kong and now Melbourne TV racing presenter. The Fownes’ have a third son, Riley who is 10.

“Obviously dad got the job here and that’s when we came to Hong Kong. They didn’t leave me behind. I finished my schooling here in Hong Kong and followed the old man around virtually from the time we got here. Even when I was in school I’d be going to track work in the morning.

“When we came to Hong Kong, I found it amazing, full of sky-scrapers. I hadn’t seen anything like that. It was a big change and it took a little time to settle in here even though there were English traditions like in India. Hong Kong was still under British rule when I came here. It’s a great city and until recently there have never been any great dramas. That’s changing a bit now but we just keep doing our best and hope that things will be resolved well for everybody,” he said.

Fownes completed his education at the King George V school. “In those days most of the kids were from ex-pat families but that began to change 10 or 15 years later. It was good, I remember it being a lot of fun,” he said.

The fun extended to having a bet on the races which Fownes happily concedes he’s still wont to do. “I had lots of friends who were keen on a little punt when they were 13 or 14 as you do, myself included and my teachers. I’m sure they will remember me for the good information I used to pass on. Racing’s always been such a big part of Hong Kong culture and just to be a part of it when I was young and to live on the premises in the trainer’s quarters was great,” he said.

Fownes began training in 2003/04, the season after his father’s retirement, but the process wasn’t “straightforward” he recalls. “That season we thought I’d get a licence straight up but they went to David Ferraris and Danny Shum. My dad was beside himself because he felt I’d worked my arse off and deserved my spot after 18 years, officially, working as his assistant. Then Peter Chapple-Hyam applied to withdraw his license and that licence went to me and fortunately we’ve done pretty well ever since, I think,” he said.

“Yes, we were best mates,” he reiterated this week, “we did everything together. Before school I’d go to the track with him, muck out boxes and groom the horses. Dad always had his horses clean and presented so well in the paddock. I’d learn how to blister horses, learn how to get a feel for horses with problems. He always had a keen eye and taught me that you learn so much by being observant and hands on.

“There was never any prospect of me not following in his footsteps. I loved it from day one. What’s not to love about being with horses? Every day is different, every day there’s something happening so it’s an exciting business to be in. Very rewarding at times, very sad at times. The high and lows of the game. Some days you’ll be scratching your head why a horse might have underperformed, asking yourself ‘did you get it wrong?’ You are constantly pushing yourself to work hard and try to get the best out of your horses.

“The qualities he instilled in me were to treat your horses with love and care and look after your owners and always do the right thing. Always have integrity and have pride in yourself, never do anything that will put you in trouble. He believed that once anyone started to cheat they could never come back,” he said.

The Hong Kong Jockey Club’s eulogy to Lawrie Fownes notably said: “he established a reputation as a dedicated horseman noted for integrity”.

“Dad also said that you lose your ability to be a horseman, a really good trainer if you’re relying on something else. I’ve always maintained that if you work hard and build a good team around you, the rest will take care of itself and touch wood, so far, it’s been all right,” he said.

That team now includes his elder sons which is a source of some pride. “It’s great. Ryan and Ronan are both great boys. They’re late into the game in a sense. I never pushed them. I just said ‘go find your feet, do whatever you want to do’. Ryan went to Uni in Sydney and rang up one day and said ‘listen dad, I want to come and join you and learn more about the horses.’

“They’re both learning the ropes the right way, educating them slowly. They’re getting there and they will get all the experience I can find for them, joining other trainers left, right and centre. When I was a young guy I went to the UK, the States, Australia and New Zealand and even though Hong Kong is unique and a unique place to train, you can always learn with horses wherever you go.

Hong Kong trainer Paul O’Sullivan remembers Fownes joining his family in New Zealand. “He was there for two or three months. We were working 60 to 70 hours a week but I can’t recall that Caspar did much,” O’Sullivan joked amid the usual good natured banter between the two. Son Ronan chipped in with the reason he couldn’t say a bad word against his dad. “That’s because he’s the boss,” he said.

The Fownes team formerly included current Hong Kong trainer Chris So who relished his time with the stable. “Caspar, I see him like my teacher and my good friend. He taught me a lot about horses and how to deal with people. He treated me like a brother. I worked with him for about 10 years and he helped me to become a trainer.

“He’s a smart guy and he knows how to deal with Hong Kong people. He’s just like a Chinese, that’s what I say. He can deal with the Chinese people, the Chinese owners. When I was there he had a lot of Hong Kong owners who didn’t speak English but they loved to let him train because he’s always smiling and has a good sense of humour. A lot of people really like him and he’s been champion trainer.

“I’ve trained for seven years now and still have a good relationship. Even now I might ask him something and he’s always happy to help. He’s respected by everyone, I believe, from the mafoos to the owners. He doesn’t generally speak a lot of Cantonese but he understands every word, don’t worry about that,” So said.

Fownes heads into LONGINES HKIR race day fresh from a double at Sha Tin last Sunday, with a degree of confidence about two of his favourite horses Rise High and Southern Legend, but also acknowledging that the competition is tough not only this weekend but year round in Hong Kong.

“There are so many facets to training well in Hong Kong and the competition’s got a lot tougher. It’s about being sharper, about good horsemanship and identifying as quickly as possible what best suits a horse from preferred surface to training regime. And it’s a handicap system, which makes the racing very competitive and very tough.

“You have so many good, new horses coming in and you have to strike a balance with your older horses; keeping them to the level where they can perform and retire them at the right time when they’ve done their job.

“In Hong Kong, we generally do well in moving horses on at the right time which is a good thing, it’s good for everyone. The Jockey Club has a great system in place – when a horse is imported the owners have to pay about US$8000 towards their export no matter what in re-allocating that horse to another country. We’re trying to do the best for the horses, which is so important these days,” he said.

As to the future and his penchant for a bet, Fownes is refreshingly candid but perhaps unnecessarily self-effacing given his currently threatening fourth place on the trainer’s table. “I’m 52 and just keep plugging away, trying to get the stable back in top form. I’ve always been a top three, top four trainer but the last couple of seasons have been a bit tougher.

“Perhaps I need to see it more as a business and run it accordingly. I try to do the right thing by the owners, persevering with their horses. Maybe those clients appreciate it but there’s other people who probably don’t if they see you sliding down to sixth or seventh so I’ve got to run it as a business and prove to everyone that I am in the top tier where I’ve been for 80 per cent of my career.”

Fownes believes a focus on cultivating young owners should be a high priority. “A lot of bigger owners are getting older as all of us are so you want to encourage the younger people to come in and be excited by it. Show them how dad gets excited shouting for his horse or leading in a winner. They’ll remember their dads doing that and follow suit because it becomes a family tradition. We need younger members and owners to take the sport to the next level,” he said.