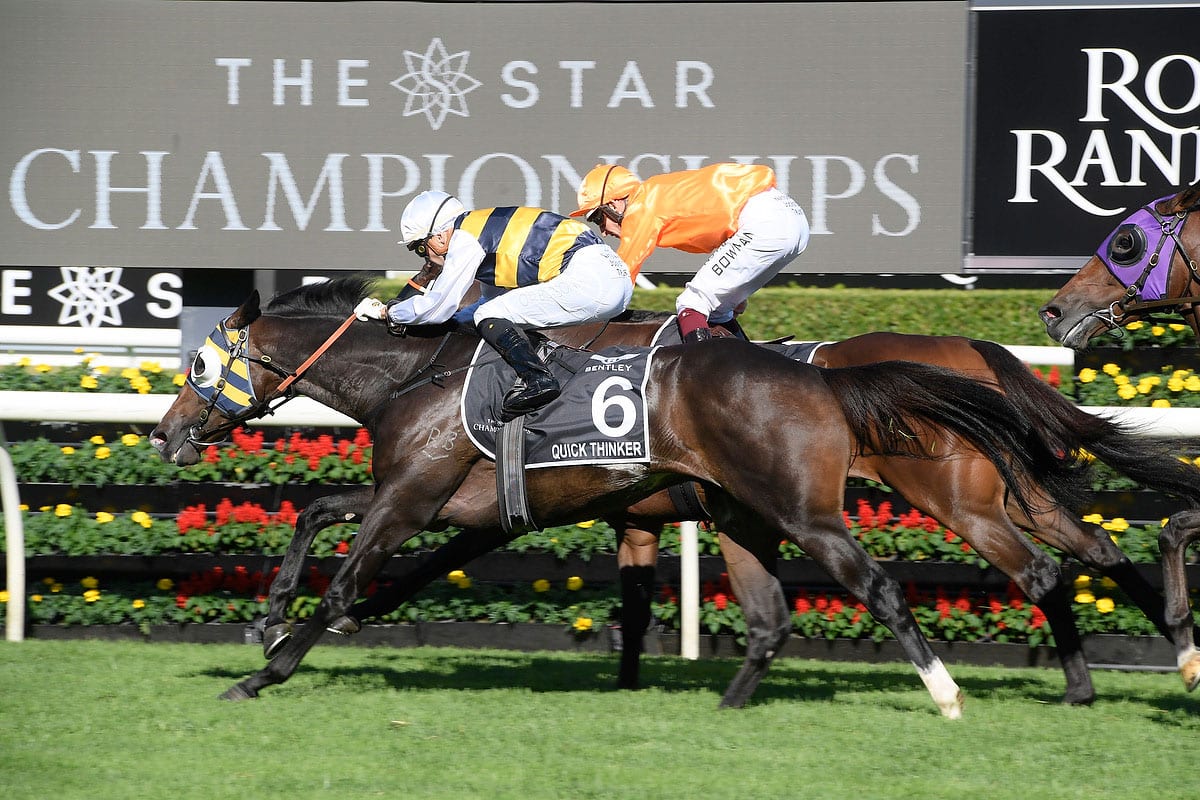 The Sydney track is currently rated a Heavy9, with fine weather prevailing in Sydney after a week-long deluge that forced the Golden Slipper meeting to be postponed a week.

“I’m sure the track will still be pretty wet (on Saturday) and that should suit him,” Forsman, who trains in partnership with Murray Baker, said.

“The horses have been at Warwick Farm which hasn’t been as affected. They have a better track there so it hasn’t affected their preparations too much and thankfully the rain has subsided now.

“I don’t think the races being put back a week is going to bother them too much, Quick Thinker has gone a couple of solid runs but has been crying out for a some give in the ground and he finally gets that on Saturday.

“I think this will be where we expect to see him put his hand up.”

Meanwhile, stablemates The Chosen One and Aegon continue their preparation for Group One tests in the coming weeks.

“They are both going really well,” Forsman said. “The Chosen One will run Saturday week (in the Group 1 Tancred Stakes, 2400m) and hopefully that will set him up for the Sydney Cup (Group 1, 3200m).

“Aegon has just had a bit of a freshen since a bit of a sub-par performance and he seems to be bright and back on his game. He might have a trial somewhere next week and that will lead into the Doncaster (Group 1, 1600m) on Derby Day.”

Aegon suffered his first career defeat at Randwick earlier this month when sixth in the Group 1 Randwick Guineas (1600m) though Forsman is putting the lacklustre effort down to timing rather than the Good4 track.

“I don’t think it (firm tracks) bothers him, he has run on firm tracks at home,” Forsman said.

“It was more just that relatively quick back-up for him, I don’t think he got back to his best in time and with the two week break between runs he just raced a bit flat.

“He is just that sort of horse at this stage of his life, he is a bit immature and I think the freshen between runs will do him the world of good though I think any give in the track does help him.”

Forsman looks set to join his horses in Australia with the government hinting a trans-Tasman travel bubble will go into operation next month.

“I’m considering it, whether it is next week or the week after,” he said. “Things are starting to look a little bit more positive in that regard and there are a few MIQ spots opening up too, so even if it does come to that I won’t be away for too long.

“We will work it out in the next few days.”

On the domestic front the Baker-Forsman stable saddled a winning double at Pukekohe on Wednesday, while they unveiled a juvenile talent at the Cambridge trials on Tuesday.

Turn The Ace was a dominant two and a quarter length winner of his 950m heat with Forsman saying the son of Turn Me Loose is likely to step out on raceday this season.

“He is a big raw, rangy horse,” Forsman said.

“He is not a natural two-year-old but he has quite a bit of ability so we will try and get one or two runs this prep hopefully and get a win on the board to set him up for his three-year-old year. He has shown quite a bit.”

Turn The Ace had previously won a trial back in December and is from the eldest crop of Turn Me Loose, who Baker and Forsman prepared to win at Group One level on three occasions before his retirement Windsor Park Stud.