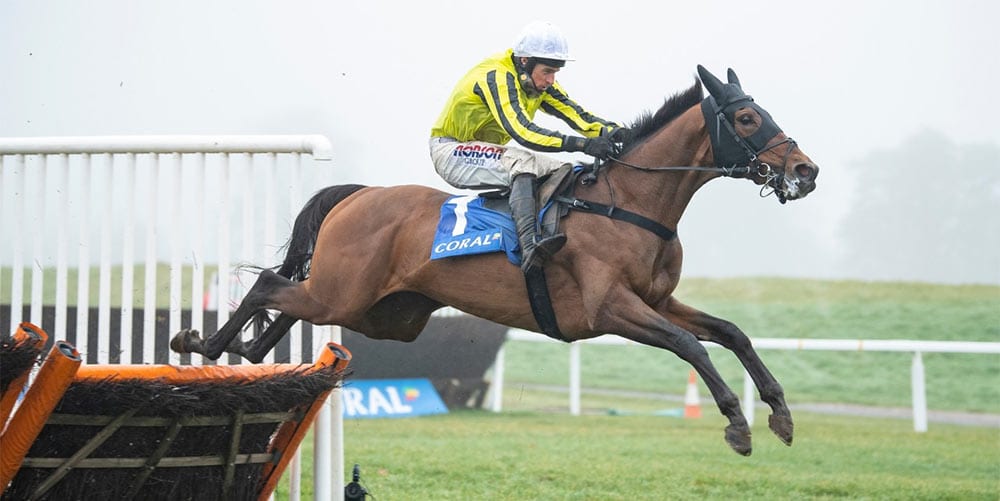 At Sandown on Saturday afternoon, Allmankind and Politologue ran excellent trials for the two-mile championship chases at the Cheltenham Festival next March.

The double for wins in the Arkle Chase and Champion Chase respectively pays +8000 with online bookmakers. Allmankind and Politologue are both third in the betting, so the place element returns +800 at one-fifth the win odds.

Allmankind produced a faster time in the Grade 1 novices’ chase than Politologue in the Tingle Creek Chase for more experienced horses, with both races covering one mile and seven-and-a-half furlongs. The four-year-old is now +1000 with UK betting sites to win the 2021 Arkle Chase.

Before reaching the age of five, Allmankind has already won Grade 1 races over hurdles and fences. The weight-for-age allowance of 6lbs certainly helped in the Henry VIII Novices’ Chase, but the horses that finished second and third received the same weight.

Allmankind made all the running and was just about foot perfect at the 12 fences. The win earned an Official Rating of 153 and third favouritism behind Shiskin and Sharjah in the Arkle betting.

Sharjah’s latest figure is 164, but the Champion Hurdle runner-up has not jumped a fence in public and Shiskin is the horse to beat. That horse’s rating of 159 was achieved in his only start over fences.

Shiskin’s hurdles form, highlighted by second place in the Supreme Novices’ Hurdle, was replicated in a beginner’s chase at Kempton last month. However, Allmankind’s win at Sandown puts him at a level over fences that is underestimated by the odds at the top of the Arkle betting.

Politologue was more workmanlike than superb in winning the Tingle Creek Chase for the second time. However, despite the absence of Altior, the seven-length win was just the right prep for defending the Champion Chase at the Cheltenham Festival next year.

The 2020 winner has shortened to +800 for back-to-back wins. With doubts about Altior’s match fitness and even possible future, bookmakers are quoting Chacun Pour Soi as a +350 favourite after a solid win at Cork.

However, Politologue’s latest two starts have produced wins in the two most prestigious chases of the season around two miles. The grey now has a career-high rating of 169, while Chacun Pour Soi ran to 172 at Cork. The current odds do not reflect those numbers, so the value is with Politologue.

This year’s champion chaser also beat Min in the top-level chase over two-and-a-half miles at Aintree in April 2018. Min won the Grade 1 chase at Punchestown on Sunday and the Ryanair Chase at the Festival in March.  Politologue consistently delivers in the best races against the best horses.

Allmankind and Politologue got the job done on Saturday in different styles. However, neither horse could be faulted in putting down markers for the meeting that matters most at Cheltenham in 2021.