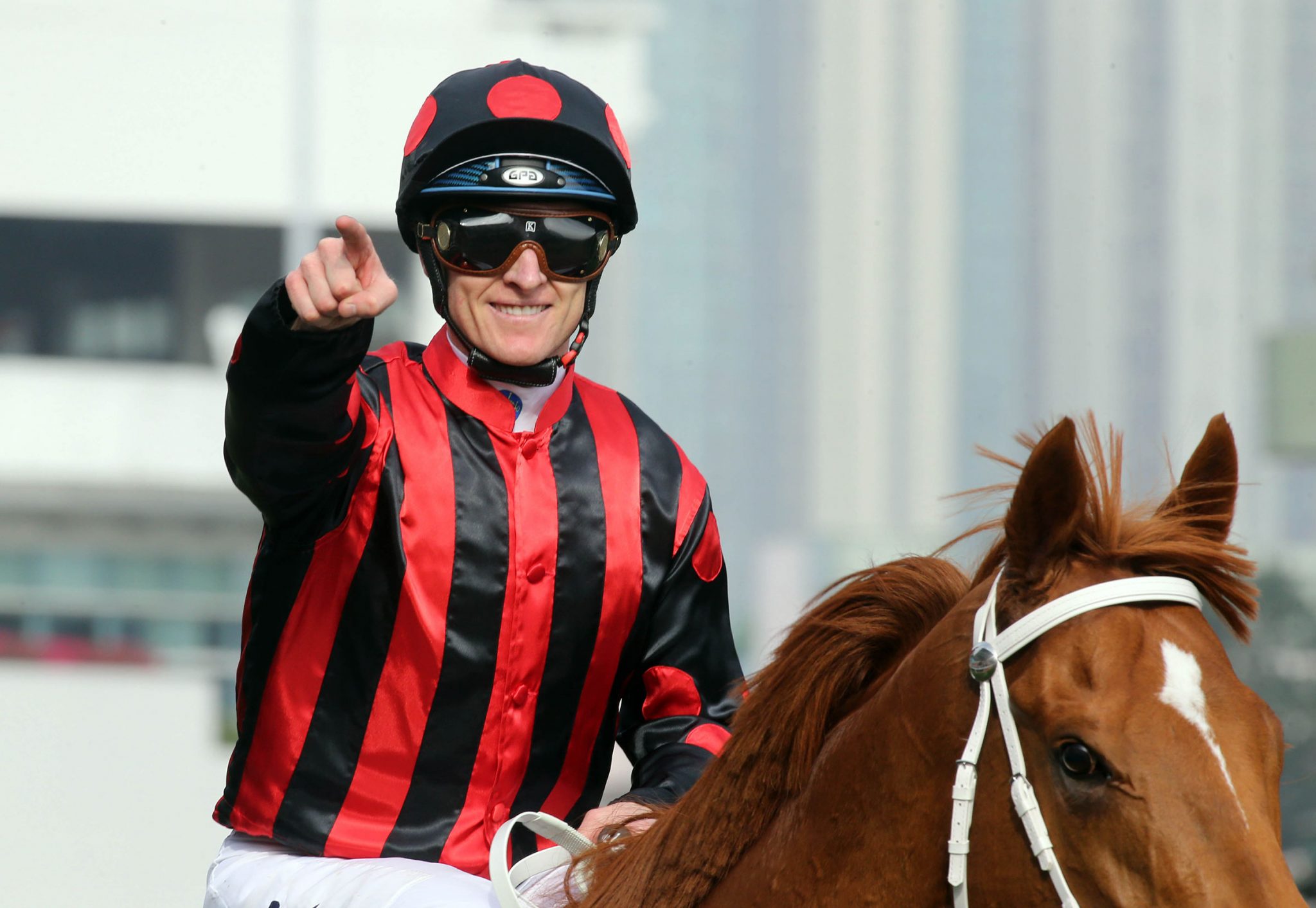 Presently riding at the peak of his powers, Zac Purton is enjoying his fastest ever start to a season in Hong Kong and this Sunday (7 November) at Sha Tin he is looking to maintain his early push with a view to winning a fifth jockeys’ championship.

Purton’s 28 wins through the first 16 race meetings is his swiftest ever beginning, eclipsing the 24 he collected across the same time frame in 2013/14, which eventually resulted in his first riding title in Hong Kong.

The HKD$30.848 million he’s banked for connections is also a new record, toppling his previous high of HKD$29.174 that he earned through the early stages of his 2018/19 campaign.

Taking nine rides this weekend, Purton is spurred on by his pairing with Glorious Dragon in the Group 3 Sa Sa Ladies’ Purse Handicap (1800m) as well as his burgeoning partnership with arguably Hong Kong’s most exciting horse, the unbeaten Nervous Witness.

Pitted as one of the leading hopes for the home team’s defence of the Group 1 LONGINES Hong Kong Cup (2000m) next month, Glorious Dragon will this weekend aim to bolster his preparation with victory in the HKD$3.7 million Group 3 contest.

“He’s working really well, he’s fresh and his action is really nice and smooth. He’s come a long way in the last 18 months, he’s consistent and always runs well – I’m sure he will do the same again,” Purton said.

Unlucky last-start in the Group 2 Oriental Watch 60th Anniversary Sha Tin Trophy Handicap (1600m) at Sha Tin, the Irish-bred son of Teofilo closed off without running room in a bunched finish behind Panfield.

“He wasn’t the only unlucky horse in that race, they went really slow and all galloped up the straight together, so it was a nice barrier trial for him.

“But there’s every chance it’s going to happen again for him with a small field and luck will come into play – he’s drawn barrier one on the inside so it doesn’t look like it’s going to be straightforward, I’m going to need something to happen for me but the horse is going well in the mornings,” Purton said.

“It’s a suitable race for him, I know he’s got a bit of weight on his back and it’s never ideal in these Group 3 handicaps – but the horse is going well and with even luck hopefully we can be there,” Purton said.

“He used to have a tendency to over-race and beat himself a little bit but as time has gone on he’s learnt to accept his position in the field and save himself for when it matters,” the Australian explained.

Across 21 starts in Hong Kong, the grey has banked HKD$11.974 million for connections; prior to import, he was a one-time winner in Great Britain.

“Francis (Lui) has been going well for a number of years, he just continues to churn out the winners, his horses are in really good form, they consistently run well and hopefully it continues,” Purton said.

Not without chances in the saddle at Sha Tin this Sunday (7 November), Purton’s book at the big track is highlighted by Nervous Witness’ acceptance for the Class 3 Suisse Programme Handicap (1000m).

The unbeaten four-year-old has soared through the grades in a short space of time and he will attempt to complete a hat-trick when he squares off with 12 others in two days’ time.

“I worked him again this morning and every week his attitude to just seems to continually get better, he’s relaxing a lot more now, even compared to how he was two or three weeks ago, so he’s on the right path,” Purton said.

Across two starts, the son of Star Witness has enhanced his rating by 28 points with two commanding efforts down the straight.

“He has to carry a big weight, he’s on drawn the wrong side of the track and there’s a couple of horses in the field we don’t know much about, so it’s an interesting race but I’m looking forward to riding him again,” Purton said.

Trained by David Hayes, Nervous Witness tuned-up with a trial following his last run, clocking 1m 01.59s for the gallop over 1050m on the dirt.

“I thought his trial was pretty good – there was no prize money on show but he still won the trial nicely and that was just to keep him on the ball because he was six weeks between runs,” Hayes said.

Though at this morning’s (Friday, 5 November) trials, Hayes quashed any sort of temptation to supplement the speedster for the Group 1 LONGINES Hong Kong Sprint (1200m) next month.

”I thought it was pretty good (his last run), because he got it served up to him and they ran some incredible time, running 19.84 (seconds) in the middle there, it showed that he’s not just a fast and weak horse.

“But hopefully this time it’ll be slightly more leisurely because he’s got the 133 pounds which is probably the only negative – but to my eye, he’s improved a bit,” Hayes said.

“I said on the day it was one of the best debut winners I’ve ever trained with regard to the time he ran and the way he did it, so it’s exciting every time he runs – I’m looking forward to it,” he added.

Another of Hayes’ rising stars, Fantastic Treasure stepped out to trial as he builds towards his second start this season in the Class 1 Panasonic Cup Handicap (1400m) on Saturday, 13 November.

Under the hands of familiar ally Chad Schofield, the four-year-old coasted comfortably through his 1200m workout on the dirt, clocking 1m 11.59s – a half-length behind Beauty Legacy, who crossed the line first.

“I’m very happy, he was nice and fresh, he felt great and he strode to the line very nicely. I’m looking forward to the Panasonic Cup – getting out to 1400 metres will be much better for him,” Schofield said.

On a Four-Year-Old Classic Series trail, the gelding won all five of his races last season before suffering his first defeat at his first run this term over 1200m at Class 2 level.