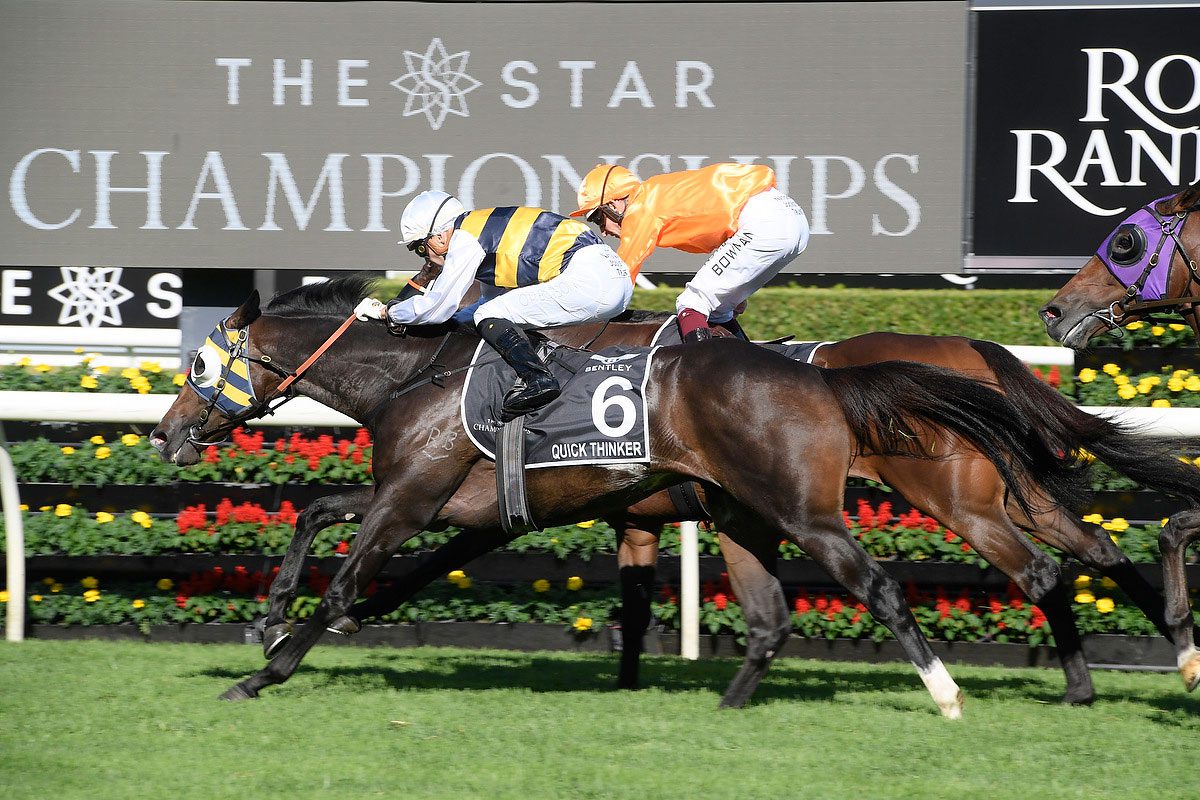 Connections of the Murray Baker and Andrew Forsman-trained Quick Thinker were praying for a wet forecast ahead of the Group 1 Caulfield Cup (2400m) on Saturday and their wish has come true.

The Group One winner appreciates rain-affected going and his Cambridge conditioners have elected to chance their arm in the time-honored race after consulting with OTI Racing’s Terry Henderson.

“We were a little bit nervous to bring him down to Caulfield because the track can be very firm there,” Forsman told SENTrack.

“Given the forecast, we just have to hope that the weather people have got it right.

“He would need good rain the day before and the day of for him to come into his own, and there is the potential for that to happen.”

While the five-year-old entire’s biggest victories have come on heavy and soft tracks, including the Group 1 Australian Derby (2400m) and Group 2 Chairman’s Quality (2600m), Forsman said he also needs things to go his way during the running.

“He is a horse that needs to be up on the pace, rolling along and doing his own thing,” Forsman said.

“As soon as he gets a bit of a bump or you feel like he is being dictated to, he is a colt and doesn’t appreciate that.

“For him it is getting into a rhythm, being up on the pace and getting a clean run.”

Quick Thinker takes a mixed form line into Saturday, finishing runner-up in the Group 3 Newcastle Gold Cup (2300m) two starts back before finishing 14th in the Group 1 Metropolitan (2400m) on a Good track at Randwick.

The Kiwi raider will give his stable a two-pronged attack in the Caulfield Cup alongside The Chosen One who finished third in last year’s running of the time-honoured race.

The Savabeel entire has followed a similar preparation and Forsman believes he is tracking better than this time last year after his runner-up result in the Group 2 Herbert Power Stakes (2400m) at Caulfield on Saturday.

“Year in and year out he seems to be putting his hand up and steps up when the big races are on. He seems to have come back in great form this time in and I think he probably is going better this year,” Forsman said.

“Damian (Lane, jockey) was rapt with the run (Herbert Power). We were a bit concerned with it being the last race of the day and how firm the track would be and how that would affect his chances, but he sprinted off it brilliantly and he has come through it really well.

“It is the best he has raced and come through a race for a fair while.”

Meanwhile, back in New Zealand, Forsman is looking forward to giving Aegon a trial at Taupo on Thursday ahead of his trip to Sydney where he will contest the AUD$7.5 million Golden Eagle (1500m).

Doubt was cast over his preparation towards the rich Sydney feature when he suffered a bleeding incident in the Group 1 Makybe Diva Stakes (1600m), however, Forsman said he has made pleasing progress since then.

“The plan is to take him to Taupo for a trial and it will be a good day out for him. He needs a good trip away and hit-out,” said Forsman, who part-owns the son of Sacred Falls.

“Assuming he comes through that well then it is a couple of weeks onto the Golden Eagle.

“It is has been the target the whole preparation. It was just a shame we struck a hiccup on the way, but I see no reason since he has been back in New Zealand post his race at Flemington not to press on with those plans.”