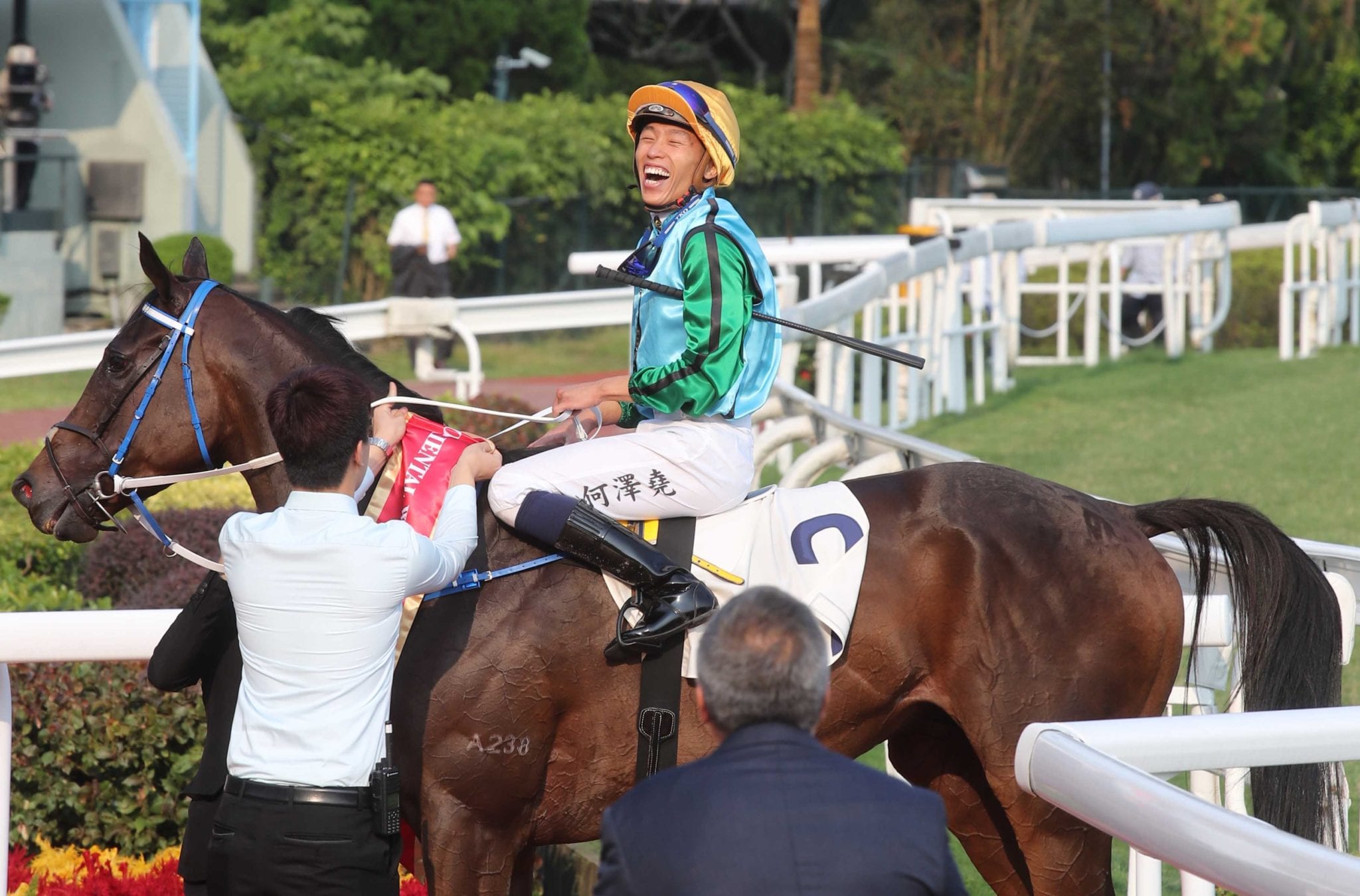 Vincent Ho will take on some of the world’s best this week with a full book in Sunday’s Group 1 races and is slated for tonights (4 December) LONGINES International Jockeys’ Championship as the highest-flying ‘homegrown’ talent in the Hong Kong riding ranks.

Ho is a graduate of the Hong Kong Jockey Club’s Apprentice Jockeys’ School, an institution which provides young Hong Kongers with a pathway to a career in racing. It sends its most adept prospective hoops to race-ride in Australia and New Zealand before affording the best an opportunity to compete as 10lb claimers on one of the world’s toughest circuits.

Ho, who made his first IJC appearance in 2014 and was third last year, is one of nine Jockeys’ School alumni to have ridden at the event, first staged in 1998 when the Jockey Club, presumably mindful of its rider development, included a provision for graduates to participate alongside the world’s greats. Eddy Lai and Alex Yu made the first line-up, nowadays there is one berth open to ‘the local boys’.

“It’s a great opportunity for me to learn, because the best jockeys in the world come to the IJC,” Ho says in his usual modest manner as he prepares for one of the flashiest nights in world racing. “I’ve still got plenty to improve and Hong Kong is a place where you can’t make any mistakes if you want a ride to be a winner.”

The apprentice school’s alumni have populated the riding ranks ever since the first cohort graduated in the early 1970s, led by one Tony Cruz, exceptional champion jockey, champion trainer and all-round living legend of the Hong Kong scene.

Cruz was an exuberant force, an instant hit, a chart-topper of a jockey. Ho is the product of a different era and his emergence as a top-tier rider has come over several seasons of quiet, steady advancement.

In some ways, the boy from Clearwater Bay, now 29, is still studying his chosen career, but without the formality of a classroom: his tough fitness regime; summer after summer in Europe honing his skills and advancing his knowledge; rigorous self-assessment; all for the unwavering pursuit of his own betterment as a jockey.

His dedication paid off in the form of a career-best 56 wins last season, enough to finish fourth in the premiership and claim the Tony Cruz Award as Hong Kong’s leading homegrown jockey. After notching six wins in England during his annual working ‘holiday’, he has maintained his progress this term with 17 wins so far and has four Group 1 rides in Sunday’s (8 December) LONGINES Hong Kong International Races.

“I guess I’ve got some momentum,” he says, in an almost unconvinced, thoughtful tone, “but I always focus on the next race, I don’t think a lot about how the season is going as a whole.

“The horses I’ve got on Sunday, they are quality rides and I’m grateful to have that support. I’ve been given opportunities and now it depends on me as to whether I can win on them.”

Ho last year regained the IJC berth from Derek Leung, the homegrown representative for the previous three years. Keith Yeung and three-time IJC competitor Matthew Chadwick are the other local lads to have represented in recent times.

Chadwick, 29, was a precocious sensation who made his IJC debut 10 years ago, and by age 22 he had partnered California Memory for back-to-back wins in the Group 1 Hong Kong Cup. Leung, 31, enjoyed his greatest day two years ago when he guided Beauty Generation to his first Hong Kong Mile victory.

“Winning a Group 1 on Beauty Generation was one of the most important opportunities in my career, it’s very hard for a local jockey to get a chance like that and when you get it you have to hold it, ride your best and hope for luck,” Leung says.

“I remember the feeling and I want to have that again, I want to ride another Group 1 winner.”

Ho has not experienced that feeling. He hopes to sooner than later.

“My goal since I started has been to be one of the world class jockeys,” Ho says. “Of course, to be that, you have to win an international Group 1, whether that’s in Hong Kong or elsewhere in the world.”

Chadwick had barely ridden out his claim before he was riding high on the world stage, mixing it with the very best at the IJC and enjoying success aboard the Cruz-trained pocket grey, California Memory at the HKIR.

“It happened very fast, because I was riding on a high with Tony (Cruz) and everything was clicking; it was very early in my career and now, looking back, it’s a real honour to have ridden that calibre of horse,” Chadwick says.

“It was different when Derek won his Group 1 because he’d been a senior rider for a period of time but I was just out of my apprenticeship so it was like a hit and run.”

Chadwick’s career has been, by his own admission, “up and down” since the California Memory days with some “rough roads along the way.” Last season he battled his way to a respectable 22 wins but the real quality rides have gone elsewhere.

Leung, for a time, slipped into the ‘leading local’ niche. Now it is Ho. But the sense of kinship between the Jockeys’ School old boys does not leave space for green-eyed envy.

“We were all happy for Derek when he won on Beauty Generation,” Ho says. “It’s not easy at all for a local boy to win an international Group 1 and I congratulated him because I know how tough it is for us.

“It was really good for us to see Matthew and him win an international Group 1. For any of us doing well – it’s not just about myself, we’re local boys and we all represent the Apprentice Jockeys’ School. Outside in Hong Kong, young people look up to us and it’s definitely important.”

But while Ho is riding a rolling wave’s crest, Leung, after enjoying a boon on the back of his big win, has slipped down the order since going through the perennial problem of losing the ride on Beauty Generation to a big expat name, champion jockey Zac Purton, who had an agreement to ride for the owner.

“When you ride a Group 1 winner, it just steps up another level, you have such confidence with every horse, and everyone can see that. People know you’re a Group 1 winner, they know you have the skills and the support of big trainers and owners and others follow,” Leung says.

“That season everything went very well. But then last season I had an early suspension and everything from that point on was a bit upside down. It’s hard to come back because you have young jockeys coming up and the opportunity is gone already. Now I have to work hard for those chances again. I still have the skills in my hands, I just need to have the horses to show it.”

Confidence is a recurring theme for all sportsmen. As Ho heads into Wednesday night’s LONGINES IJC, his is buoyant.

His wins this term include driving a surging Rise High to a famous win over Beauty Generation in October’s Group 2 Sha Tin Trophy Handicap (1600m). He will ride him again in the Group 1 LONGINES Hong Kong Cup this weekend.

The fact that he has retained the ride on that horse, and his Group 1 LONGINES Hong Kong Vase mount Ho Ho Khan, over a sustained period, is indicative of the rider’s new-found status. In the past, he likely would have been replaced by a bigger name, just as Leung was. And, as if to press home just how well Ho is riding at present, he has got the call-up for the John Size-trained Full Of Beauty in the Group 1 LONGINES Hong Kong Sprint.

“When you ride well and the trainer can start to see you have confidence to ride well they respect you more,” says Ho, who has also been ever-present on the exciting Golden Sixty, a six-time winner from seven starts and a plum ride going into the Four-Year-Old Classic Series.

Chadwick, too, understands the importance of having a cool, focused head, unencumbered by doubt. “It’s a mental game and that’s always been the case. If you don’t have the confidence, the belief in your ability, you might as well not be here,” he observes.

Ho will need that confidence when he lines up against the likes of Frankie Dettori, Ryan Moore, and his regular world class rivals Purton and Joao Moreira in Happy Valley’s four-race jockey showcase.

Ho views it as a learning experience as well as a chance to test his self-belief and skills against some of the cream of the world’s crop.

“Frankie Dettori or Ryan Moore might be next to me or right in front of me and I can watch them, see what they do,” he says. “It’s different from watching them on videos, the best way to learn is to race next to them and take in the details of how they ride.”

Leung echoes that take: “I’ve ridden at the IJC a few times already and it’s very exciting because all those great jockeys come here, to Hong Kong, and it’s always a good competition. They have different skills, they’re not the same as the riders around here, and when you’re with them you see how they react in the races, you see how they’re riding, so it’s good experience.”

Ho, Leung and Chadwick are just three of the 10 Apprentice Jockeys’ School graduates among the current pool of 23 active riders contracted to ride in Hong Kong. Ho currently sits fourth in the premiership; Chadwick, Matthew Poon, Alfred Chan, and Leung are in the upper part of the table; Keith Yeung, Dylan Mo, Jack Wong, Alex Lai and Ben So are grinding away in the lower end.

The pressure-inducing factors jockeys might face in Hong Kong are manifold. The crucible is intense, two meetings per week, a couple of dozen riders competing for 12 rides per race at Happy Valley or 14 per race at Sha Tin; turnover at each meeting exceeds HK$1 billion, prize money is high; the set-up and the culture demand results. Scrutiny is intense: it can be harsh.

One bad ride can drop a rider down the pecking order – and when word starts to spin of a jockey’s luck failing, it takes a welter of effort to change opinion. And then there’s the lingering perception that homegrown jockeys are overlooked in favour of expatriate riders.

“I’m not sure about that,” Ho says to the last notion. “A lot of it comes back to confidence again and if you’re confident, you ride well and the owners and trainer will support you.”

What is certain is that Ho is a talent. And win or lose this week, he will take from his LONGINES IJC experience, and Sunday’s Group 1 races, all the lessons he needs to continue his never-ending quest for self-improvement, to fuel his goal to be deemed, in his own mind, perhaps as much anyone else’s, a genuinely world class jockey.