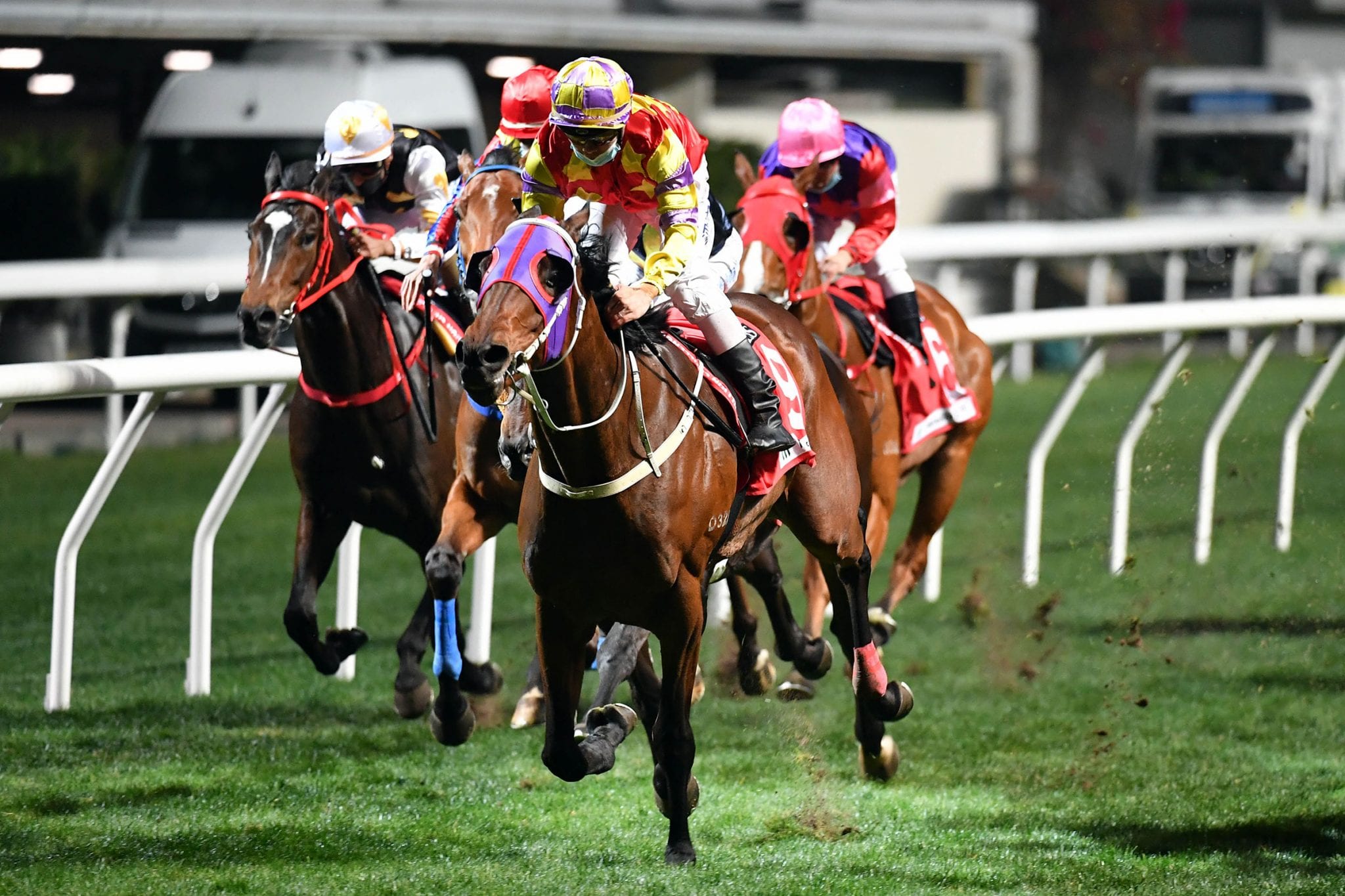 Tony Cruz will aim to add further lustre to his extraordinary BMW Hong Kong Derby (2000m) record after Delightful Laos emerged as a potential classic contender with victory in the Class 2 Chater Handicap (1650m) at Happy Valley on Wednesday (27 January).

Crowning a dominant night for Cruz, former Irish galloper Delightful Laos will now be set for the Hong Kong Classic Cup (1800m) – the second leg of the Four-Year-Old Classic Series – at Sha Tin on 21 February.

“We’ll try for the Classic Cup with Delightful Laos and we’ll see from there,” Cruz said.

“Then enter him for the Derby as well.

“Hopefully now he’s won, he showed a lot of promise (tonight) and I’m sure the handicapper will consider him to be in the race.

“I believe this horse really wants 2000m. He likes the fast ground, he’s a big horse but if he can get into the race, I would love to run him there.”

Cruz boosted his 2020/21 stable tally to 31 with a treble after California Legend (Christophe Soumillon) and Dream Warriors (Karis Teetan) preceded Derek Leung and Delightful Laos into the winners’ circle.

A son of Baltic King, Delightful Laos has recorded three wins in Hong Kong with each of them materialising over 1650m at the city circuit.

Christophe Soumillon made an inspiring recovery from the shattering disappointment of suffering injury aboard Enrich Delight in the Hong Kong Classic Mile on Sunday to register a double.

The Belgian partnered California Legend to victory in the Class 5 Queensway Handicap (1650m) for Cruz before guiding We The South to a comprehensive success in the Class 3 Connaught Handicap (1000m) for Frankie Lor.

Soumillon was stood down by doctors at Sha Tin after suffering a back strain in the incident with Enrich Delight but was determined to rebound strongly at Happy Valley.

“The back is not great but it’s still ok to ride,” Soumillon said.

Joao Moreira (77) maintained a 23-win buffer over Zac Purton (54) after the pair both produced doubles.

Sent out as a +6300 chance, the Real Impact gelding might have defied the market, but confirmed Ting’s opinion of the three-year-old.

“I was a little bit surprised but I thought he would run very close because this race was not very strong,” Ting said after watching Keith Yeung thread a narrow gap late to win impressively.

“To win is a little bit of a surprise but he is a good horse, a very good horse.

“I think his best distance is a mile, he is a nice horse.”

Yeung’s effort terminated a run of outs since early November of last year.

“He’s a good jockey and he is always riding trackwork for me and telling me what’s going on with the horses and so I give him some support,” Ting said, confirming The Anomaly’s status as a “first time winner.”

“Hopefully later we get some more.”

Paul O’Sullivan and Zac Purton combined with another upset winner on the night when +3300 contender Moment Of Power again proved his sprinting prowess with his eighth victory over the 1000m course at the city circuit.

“He’s a little marvel, he’s one-trick pony around the Valley,” O’Sullivan said after the veteran gelding led throughout to land the Class 4 Glenealy Handicap (1000m).

“He’s in the right place at the right time. He’s a very good speed horse.”

The eight-year-old has not won since 27 March, 2019 but a gradual drop through the classes to Wednesday night’s contest was the key to the belated breakthrough.

Purton also succeeded on Ever Force for Danny Shum, while Moreira bookended the meeting by snaring the opener with Tigerlad for Tony Millard and the last on Savaquin in the Class 3 Des Voeux Handicap (1650m) for John Size.

The victory was Size’s 35th for the season, lifting the 11-time champion trainer to within four of Caspar Fownes (39).