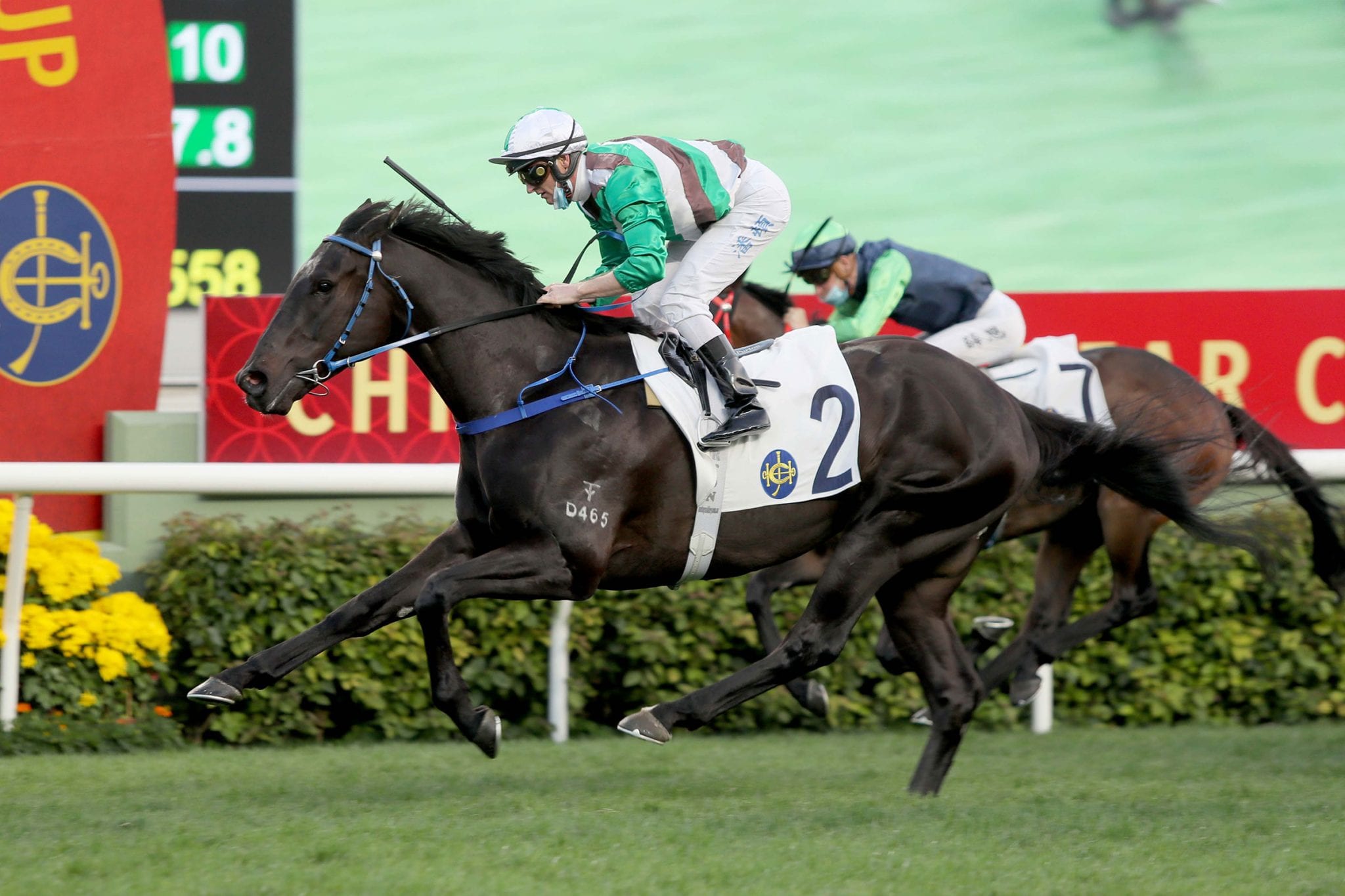 Super Football’s (113lb) Hong Kong Derby (2000m) aspirations will be put to the test this Sunday (7 March) at Sha Tin as he shoots for a hat-trick of wins and a boost in the ratings high enough to warrant consideration for Hong Kong’s most prestigious race in a fortnight’s time.

Trained by Jimmy Ting, the youngster has soared into calculations for the HK$24 million contest on 21 March with two smart wins over the mile at Sha Tin, but this weekend he faces his stiffest test yet in a hot edition of the Class 2 Daisy Handicap (1800m).

“I think he’s continued to improve, I hope he can run well again, especially with a good draw – this is his last chance to get into the Hong Kong Derby,” Ting said.

Drawn in gate three, the New Zealand-bred who arrived in Hong Kong as a winless export, will be partnered with lightweight jockey Karis Teetan for the first time as he steps up in grade and to nine furlongs for the first time.

“The concern is that it is his first time in Class 2 – I still don’t know whether he is good enough or not,” Ting said.

If successful this weekend and selected for the Derby, the gelding would become Ting’s first ever runner in the ‘blue riband’ event after being licenced as a trainer at the beginning of the 2018/19 season.

“This is his last chance, there are no more races for him to get into the Derby, so I hope he runs well – I think he is a longer distance horse, anywhere from 1600 metres to 2000 metres are his best distances,” the handler said.

Mauritian ace Karis Teetan hops up for the first time, his ability to ride light affords him the opportunity aboard Super Football, doing so with the hope of capitalising aboard an in-form and on-the-up horse.

“He’s progressing nicely, his two wins have looked pretty solid and it’s good to be jumping aboard him at the right time, he has a light weight and that’s why I have the opportunity,” Teetan said.

Teetan’s exploits at the bottom of the scale has reaped success before, notably aboard Aethero in the 2019 Group 2 Jockey Club Sprint (1200m) when the then three-year-old was allotted the 113lb minimum.

“He’s a lovely horse – I worked him with another horse and he’s very competitive which is a good sign – I think he’s going to progress into a very nice horse,” Teetan said.

Teetan is committed to riding Hong Kong Classic Cup (1800m) runner-up Russian Emperor in the Derby but will look to fend off 13 rivals in Sunday’s feature with the hope of securing a spot for Super Football in the third and final leg of the Four-Year-Old Classic Series.

“I’ve committed to Russian Emperor for Douglas Whyte but it’s nice to hop on Super Football this weekend because these horses get into these races with low weights, it’s a nice opportunity, so let’s hope he does well and gets into the Derby,” the Mauritian said.

Maximus, trained by Tony Millard, finished second two starts ago in this grade over the mile before disappointing for 10th in the Hong Kong Classic Mile, the first leg of the Four-Year-Old Classic Series.

And, following this was withdrawn from the second leg of the Four-Year-Old Classic Series, the Hong Kong Classic Cup due to lameness but has since indicated a return to form with a solid barrier trial effort under jockey Matthew Poon at the end of February.

“He trialled ok, he has a nice draw, a nice weight and he ran well before last start, hopefully with more race experience in Hong Kong he can show his ability, especially as he is fitter,” Poon said.

Undefeated across four starts in France and Great Britain prior to export, Maximus, then known as Chares, won the Listed Criterium de Lyon (1600m) at Lyon Parilly Racecourse.

“There’s a few classy horses in the race and the four-year-olds carry lightweight, I think everyone gets their chance, he needs to show something though because if he isn’t among the first couple, I don’t think he can get into the Derby,” Poon said.

Purton aims to keep on rolling

Fresh off his midweek quintet at Happy Valley, champion jockey Zac Purton is looking to keep his momentum rolling with nine rides at Sha Tin this Sunday (7 March) including three mounts for trainer Danny Shum, who this season has been a powerful ally to Purton having combined 14 times this season.

Lucky Fun, trained by Shum, contests the Class 3 Freesia Handicap (dirt, 1200m) in search of his third win from his last four starts and breaks from gate two this weekend.

“He’s a difficult horse, he’s been difficult in the gates – he stumbled on the way out the day I won on him and he played up again last time, so he’s not straightforward but he obviously has some ability and I think the barrier this time helps him,” Purton said.

“He was still getting to the line last start but he wasn’t 100 percent focussed, he was out on his own and thought he was having a day out, so if he can get in and around horses he can be a little bit more competitive,” he added.

Purton also rides Dollar Reward in the Class 4 Kalanchoe Handicap (dirt, 1200m) for Shum as well as Butterfield in the finale, the Class 2 Daisy Handicap (1800m).

After capitalising on Joao Moreira’s suspension on Wednesday with five wins including two for trainer John Size, the four-time champion jockey again teams with Size this weekend, taking the mount aboard Juneau Park in the Class 3 Dendrobium Handicap (1200m).

Purton has ridden 38 winners for Size from 166 rides since arriving in Hong Kong for the 2007/08 racing season, included among these is his 2015 BMW Hong Kong Derby (2000m) triumph aboard Luger.