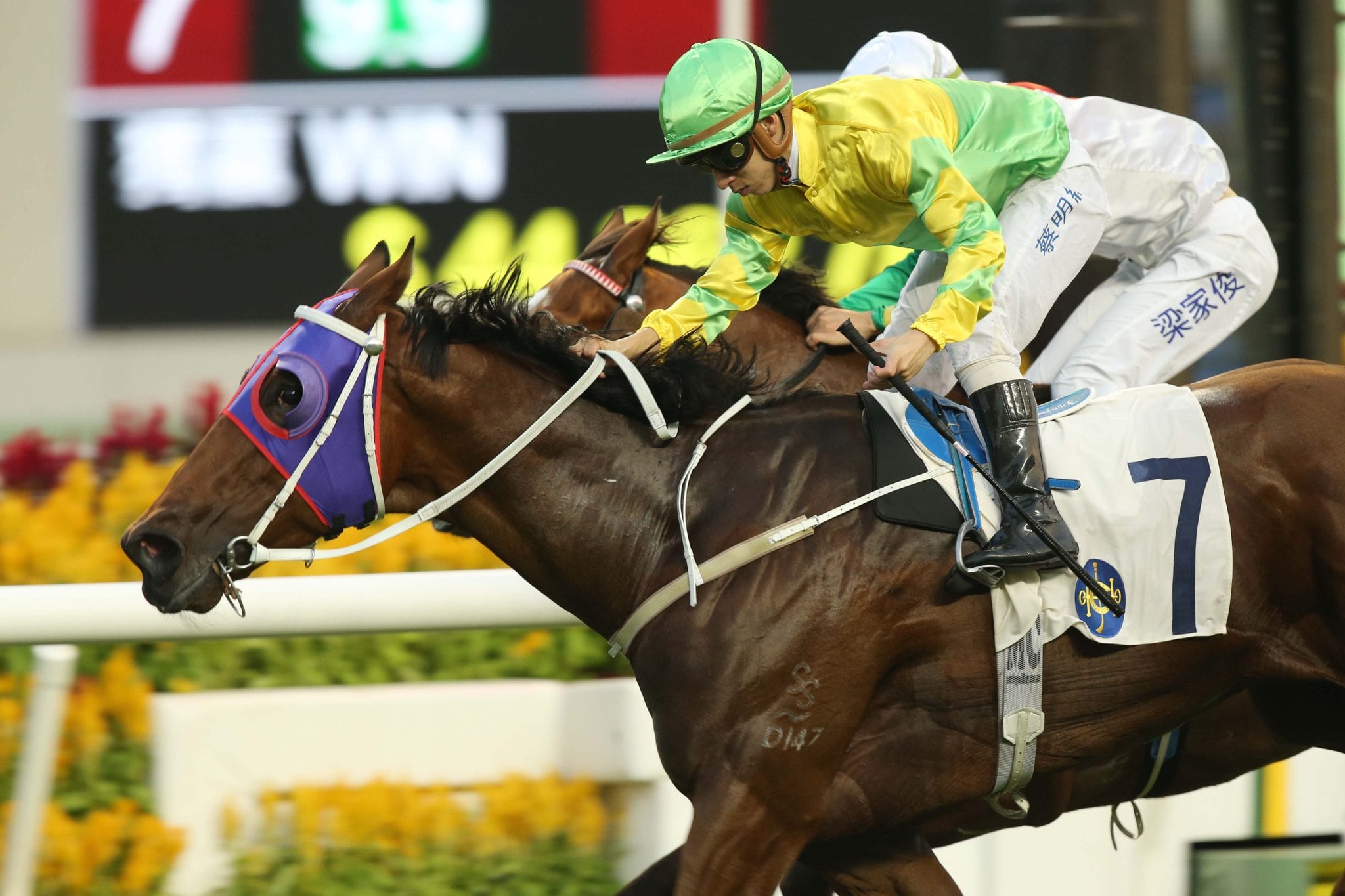 Matthew Chadwick’s renewed association with Tony Cruz blossomed at Sha Tin yesterday (11 October) as the 30-year-old fired home his second double this season, capped with victory aboard the tenacious California Rad in the Class 2 Chak On Handicap (1200m).

“He had a lovely run and he fought on nicely, very gamely and he got the chocolates today – hopefully there is more to come,” Chadwick said.

The Fastnet Rock gelding stepped away cleanly from the gates to settle third, before peeling out the in straight to fight out the finish, narrowly edging the persistent Good Luck Friend to deny trainer Ricky Yiu a three-timer.

“I think he would have learnt more from that, there’s still slightly more improvement in him, mentally as well and hopefully he can still step up but today was in his favour the way it ran,” Chadwick said.

The Tony Cruz-trainee took his record to five wins from 15 starts, an impressive 33% win-strike rate alongside six other top three efforts. Today’s win was Chadwick’s third, from the last four meetings, for Cruz, though prior to Circuit Hassler’s win 10 days ago, it had been close to three years since the pair tasted victory together.

“Every winner is good but it’s good to be riding winners from stables that are going well,” said Chadwick whose greatest success came with the Cruz-trained California Memory earlier in his career. He was the first homegrown rider to win a Hong Kong International Races contest when taking the Group 1 Hong Kong Cup on California Memory in December, 2011.

Chadwick took his tally to seven wins this season and is joint-fifth in the jockeys’ rankings, with Chad Schofield who also had a winning double; as did Vincent Ho and Vagner Borges.

He kicked off his double in the previous race aboard Craig’s Star in the Class 3 Nam Shan Handicap (1400m) for trainer Danny Shum. The win was welcome for Shum who has ten seconds to his name this season, clearly the most of any handler.

Healthy Happy dazzles on debut for a Schofield double

“That was really impressive – he trialled well leading into this without giving any indication that he could come and win at his first time out,” Schofield said.

The Zoustar gelding arrived in Hong Kong from Australia, rated 80, where he was known as Leviathan under the care of Peter & Paul Snowden and was a two-time winner.

“He really impressed me today, he gave me the feel of a good horse – it’s very tough to do what he did today, to come to Hong Kong rated 80 and win with top weight,” Schofield said.

Healthy Happy stepped away fairly from gate two and stalked the speed along the rail before peeling out at the 300 metre mark; and when Schofield pushed the button, he responded for a soft half-length score which is by no means an easy task, especially with 133lb, on debut in Hong Kong.

“Sometimes you need to carry the big weight – there’s a big difference between Class 3 and Class 2,” Lor said. “I thought he had a good chance today, the only concerns were the big weight and it being his first start.”

Schofield’s double kicked off in the first race, the first section of the Class 4 Pak Tin Handicap (1200m) with victory aboard the Manfred Man-trained Dublin Star.

There was no Joao Moreira at Sha Tin today (due to suspension) but there was still a strong Brazilian vibe as Vagner Borges bagged his first double this season, capping it with victory aboard the Benno Yung-trained Ka Ying Master in the second section of the Class 3 Lai Kok Handicap (1200m).

The Snitzel gelding recorded his first win at his third run since a throat operation in February, to correct a roaring condition.

“He’s a nice horse, he’s a good horse but he does have quite a bad breathing issue so sometimes you never know if it will cause a problem for him,” Yung said. “Today he found a suitable race with a nice tempo and a decent draw.”

The Australian-bred five-year-old has three wins from 10 starts and Yung remained positive that if he manages to stay sound, that he could be competitive in Class 2.

“He can get into Class 2 – he’s got ability but the worry is his breathing issue which is a question mark, the throat operation helped him but he’s still not 100 percent, though for sure he has improved thanks to it,” Yung said.

Earlier, the 27-year-old Borges kicked off his double with a runaway victory aboard the Ricky Yiu-trained Mighty Valor in the second section of the Class 4 Pak Tin Handicap.

“He won in good style – he’s improving and again he’s benefitted from the training in Conghua,” Yiu said.

Homegrown talent Vincent Ho was also a multiple race winner and his victory aboard emerging stayer Natural Storm in the Class 4 Tai Hang Tung Handicap (1800m) completed the sole training double on the card – for Yiu.

“He was pretty lazy – I had to push him all of the way and at the 600 metre mark he was hard ridden but he responded well,” Ho said.

The four-year-old by Pins is now a two-time winner from nine starts, both times over 1800m in Class 4 at Sha Tin. Ho though, was optimistic about the future of the gelding.

“He switches off very well and up in class with a light weight, he should still be competitive,” Ho said.

“I expected him to do well, he’s a better horse than Class 4, and we’ll see how he progresses because I want to see if he’d do well in the higher level,” Yiu said.

Fownes keeps the pressure on

Championship leading trainer Caspar Fownes kept on his foot on the pedal at Sha Tin yesterday with his 14th win this season and his fourth from the last four race meetings.

The handler has a six-win lead at the top of the table thanks to Nunchuks, who broke through in the Class 5 Un Chau Handicap (1600m) under Ho.

“He’s a horse that’s just starting to come the way he should be, it’s taken time for him, learning to cope with the Hong Kong environment,” Fownes said.

The New Zealand-bred bagged his first win at 11th start and second try in Class 5, after slipping 17 ratings points to a current mark of 35 before today’s success. But Fownes believes the O’Reilly gelding can reignite his career and return to a higher mark.

“Hopefully now we can go on in Class 4 and I still think he can be competitive,” Fownes said.

The gelding arrived as an unraced PPG (Privately Purchased Griffin) and today’s win was also his first top three finish. “I like him a lot – I thought the horse had something there,” Fownes said.

Antoine Hamelin and Tony Millard once again combined at Sha Tin, this time with the South African-bred Apex Top in the second section of the Class 4 So Uk Handicap (1400m).