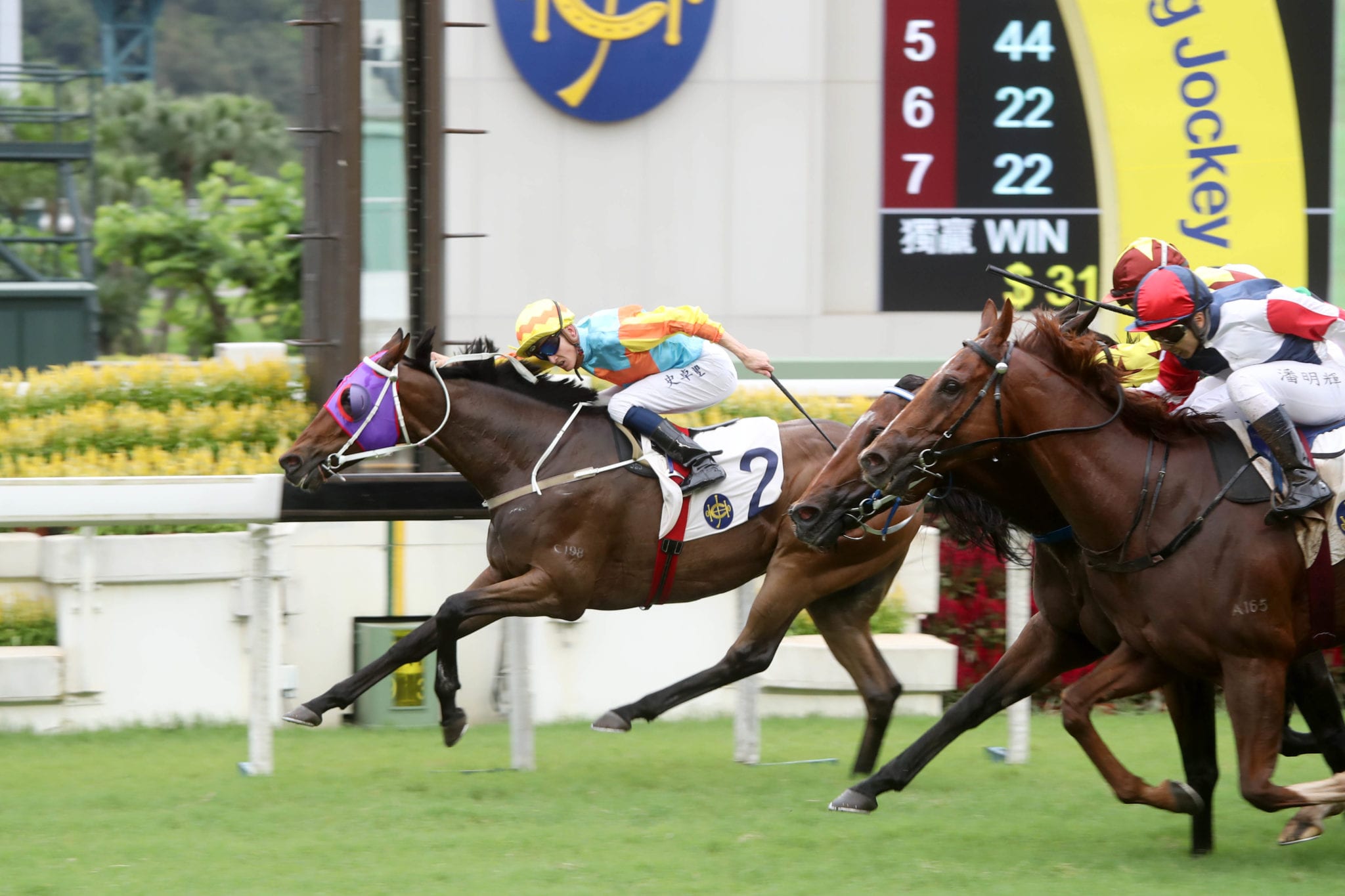 Ka Ying Star maintained Tony Cruz’s advance towards the top of the trainers’ premiership with an overdue success in the Group 3 Lion Rock Trophy Handicap (1600m) at Sha Tin on Sunday, 31 May.

“I’m going to put the pedal to the metal!” Cruz said after the Cityscape gelding had pushed the stable’s tally to 52 wins.

That puts the two-time champion trainer five shy of long-time leader Ricky Yiu, who has clocked only one win from the last seven meetings.

Ka Ying Star (129lb) had classy form in the book already this term, including a couple of Group 1 placings, but had not nailed a Pattern race and was without a win of any kind in 13 months.

“The horse has deserved this, he’s run some good races in Group 1 but he has hardly any wins on his record so this is a good way for him to end his season,” Cruz said.

“Everything went his way today; he had to dictate this race and if he did, I knew he’d be hard to run down. Chad rode the perfect race and he clocked 1 (minute) 32.95 (seconds), that’s a decent time so he’s shown his quality.”

The Cityscape five-year-old secured the leader’s spot under Chad Schofield, who slowed the tempo in the back straight before kicking on down the final stretch. The game bay responded to every urging, holding off the driving challenges of Southern Legend (133lb) and Fast Most Furious (113lb).

“Once I got the lead and got the fence I was able to give my horse a breather,” Schofield said. “Time To Celebrate had made us work a bit through a pretty solid first section and he wanted to put pressure on me again around the turn. If anything, that spurred my horse along and switched him on because usually he’s very relaxed out in front. Credit to him with the big weight, he was strong to the line.”

Schofield was delighted to have ended a personal Group race drought going back to his success on Rattan in the Group 2 Sprint Cup in April of last year. Ka Ying Star’s score also took the rider to 38 wins, matching his personal best for a Hong Kong season.

The rider reached a new peak of 39 wins when driving Mr Croissant to success in the finale, the Class 2 Amah Rock Handicap (1200m).

“I hope the (Group races) keep coming,” Schofield said. “I haven’t had many big winners bar today but numbers-wise we’ve equalled my best, so hopefully we can keep kicking strong for next season.

“I only started riding for Tony (Cruz) this season and to ride a Group 3 winner for him is very good.”

Cruz will give Ka Ying Star a well-earned rest before pointing towards the LONGINES Hong Kong International Races in December.

“We’ll try again next season,” the handler said. “There’s nothing else for him this season so we’ll have to go with what the programme gives us, so he’ll definitely be aimed at the Hong Kong Mile.”

Vincent Ho had to settle for second on Southern Legend but earlier enjoyed an easy win on a potential future star when Winning Dreamer (125lb) lived up to expectations with a successful debut in the Class 4 Piper’s Hill Handicap (1000m). The Frankie Lor-trained three-year-old showed good speed and shrugged off the useful top-weight Fabulous Eight (131lb) to win with plenty in hand – the margin was a length and three quarters and the time a smart 55.59s.

“He has a bright future and hopefully he’ll be in Group races in time,” Ho said of the 2.4 favourite. “He jumped well and relaxed really nicely in the race and just kept going.

“He’s still got a lot to learn but it’s been better each time he’s had a barrier trial – he was very green and he settled more on the turn in his last trial.”

Lor was pleased with his debutant who may be seen in action again before the campaign wraps up on 15 July.

“He’s got quality but he’s still green and was laying in through the final stages, so I’d like to give him one more run before the end of the season,” Lor said.

Zac Purton was three wins ahead of Joao Moreira when the championship protagonists mounted for the first race and was four in front at the end of the 11-race programme after he picked up one win, while the Brazilian drew a blank.

Purton’s win came when the Dennis Yip-trained Racing Fighter (130lb) took the Class 3 Eagle’s Nest Handicap (1200m) by a short-head from the Moreira-ridden Unique Treasure (115lb). That took trainer and jockey to 14 wins in tandem this term at a strike-rate of 34%.

Yip collected his third double of the season and first since December when Hinyuen Swiftness (126lb) followed Racing Fighter to the winner’s arch. The top-weight needed every ounce of Alfred Chan’s 7lb claim to hold off the Purton-ridden Bright Kid (125lb) by a short-head.

Chan nailed his third double of the campaign when making all on the John Moore-trained Beauty Amigo in the Class 3 Eagle’s Nest Handicap (1200m).

Michael Chang gained his 16th victory, the Hong Kong Jockey Club’s required total, when Bullish Glory (119lb) took the Class 4 Tate’s Cairn Handicap (2000m) under Karis Teetan. The hooded seven-year-old, a Group 2 winner and fourth in the Italian Derby in a former life, boxed on to score by half a length from the Purton-ridden Good Day (121lb).

The afternoon started with a pair of Class 5 contests, sections one and two of the Tsz Wan Shan Handicap (1400m): Soccer Master made it two wins on the bounce when taking the opener for jockey Matthew Poon and trainer Chis So – successful also with Mr Croissant – while the Richard Gibson-trained Kwaichung Brothers crept up the rail to nick the second section under Vagner Borges.