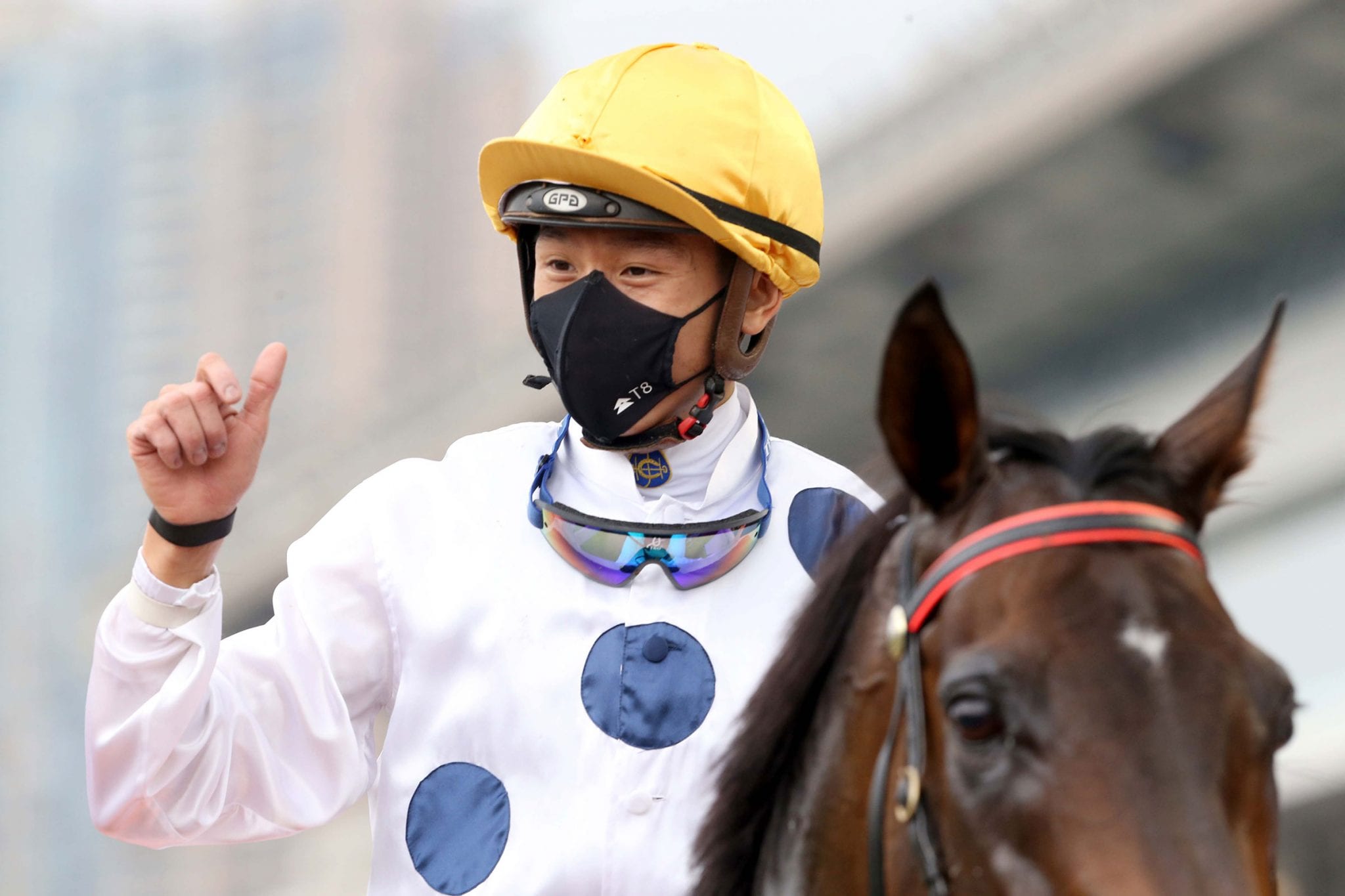 Vincent Ho will seek to triumphantly bookend the most successful Hong Kong Group 1 season of his flourishing career when partnering Glorious Dragon in the Standard Chartered Champions and Chater Cup (2400m) at Sha Tin on Sunday (23 May).

In recent history, Zac Purton is the only jockey with more sustained success at the highest level, snaring seven of the jurisdiction’s 12 seasonal Group 1s in 2018/19.

Ho, 30, has posted five Group 1 victories so far in 2020/21 – four in partnership with Golden Sixty (LONGINES Hong Kong Mile, Stewards’ Cup, the Citi Hong Kong Gold Cup and the FWD Champions Mile) and the FWD QEII Cup on Japan’s Loves Only You.

With 49 wins for the season in total to date, Ho downplayed the prospect of matching Moreira’s accomplishment as he contemplated Glorious Dragon’s chances.

“It’s still too early to talk about the sixth (Group 1) but I’m definitely going to do my best to try and make it happen on Sunday. With the grey horse, I’m definitely a good chance,” he said. “Glorious Dragon is still a good chance of course, he’s very fit.

“I’ve been working him on the grass and this morning on the dirt and he feels great. With the good draw (barrier three) I think he will be very competitive. The 2400 metres for him I don’t think is a problem and he can still have a good turn of foot in the straight and still be very strong.

“I think he will be extremely competitive.”

If passed fit to ride on Sunday after suffering a back complaint during the Happy Valley meeting on Wednesday (19 May), Purton will partner Exultant in quest of a third successive Champions & Chartered Cup triumph on Sunday.

“He’s a good horse, I’ve been on him a few times and have got a win out of him so I know he’s got it,” the Brazilian said. “Just need a few things to fall into place and help him out and no doubt he’s got a good winning chance there.

“There are few horses there that are quite strong. The distance is going to test who is the best stayer in town – and he could be the one. I’m quite excited to be riding him at the weekend.”

“He was bit unlucky as the pace didn’t suit him, he got kind of held up turning for home so that took a little bit of his chances so the margin he finished from the winner wasn’t great – it was three and a quarter lengths,” he said.

“In normal circumstances, he would be right there. Don’t forget he was carrying the top weight (133lbs). That gives me confidence that he might be as good as, or even better than, the horses that finished in front of him in the Queen Mother.

“Exultant is actually the best stayer in town. His record proves that and even if his form is not the best at the moment, he still deserves big respect.”

Leading the jockeys’ championship by 18 wins – 128 to Purton’s 110 – Moreira is confident Killer Bee can close the 11-race card in style with success in the Class 3 River Verdon Handicap (1200m) on a program where the South American also partners rising star Courier Wonder in the Group 3 Sha Tin Vase Handicap (1200m).

“I think he’s (Killer Bee) a horse for everybody else to get excited about for the near future,” Moreira said, acknowledging a nine-pound weight rise to 127 pounds after the gelding’s stunning last-start win.

“The confidence is quite high. If he is able to reproduce what he has done last time, he might win again. The extra weight on his back is not going to damage his chances too much. He’s such a big and strong horse, he’s not going to find it difficult to carry that.

“It looks like he’s going there with a great winning chance once again.”