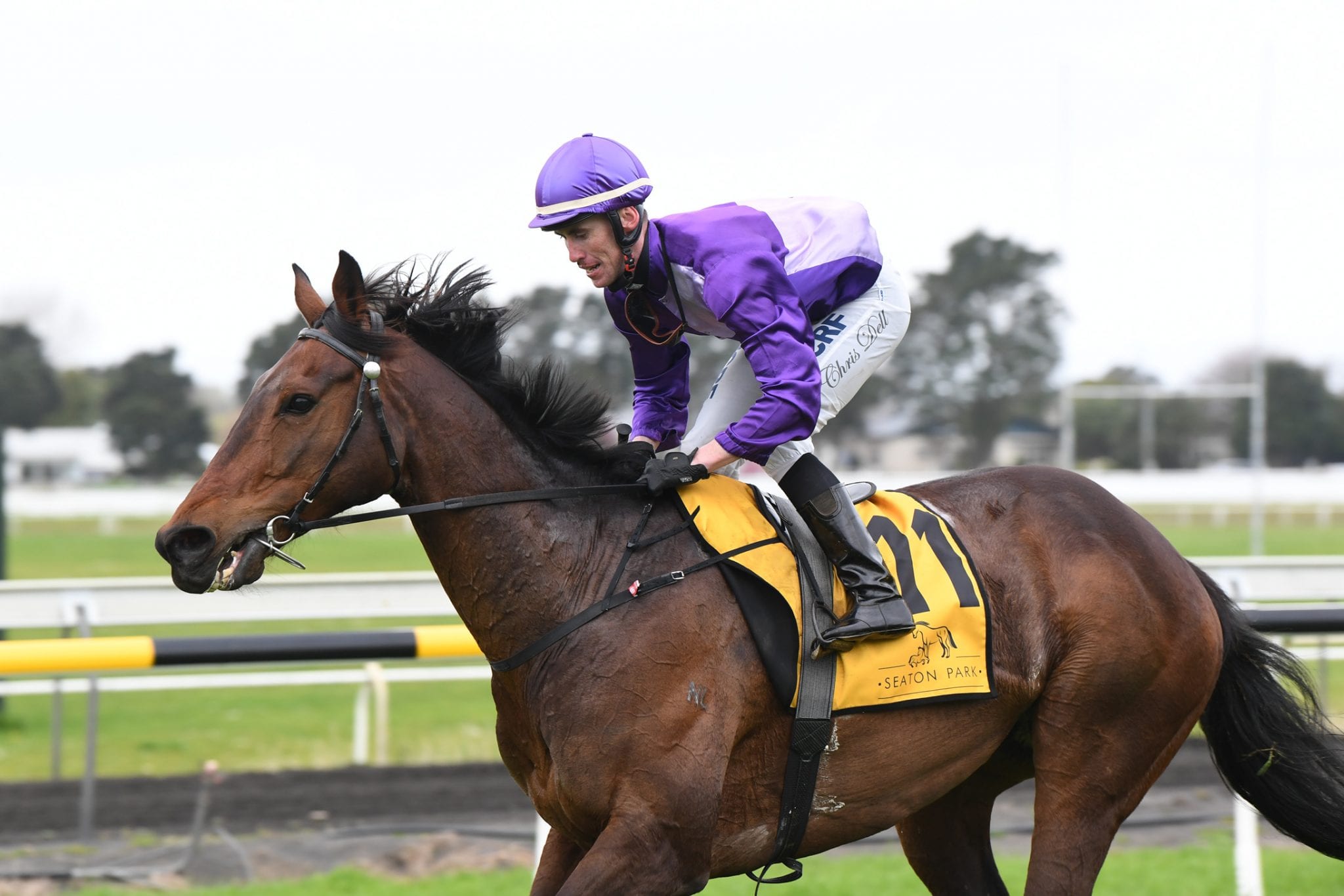 Unfancied Awapuni galloper Master Fin caused a massive boilover in one of the special features at New Plymouth on Saturday when he outstayed his rivals to take out the NZB Airfreight Road To The Jericho (3210m).

It was the second running of the race that serves as the first New Zealand qualifying event for the unique A$304,000 Jericho Cup (4600m) at Warrnambool in late November, a race that was introduced in 2018 to commemorate the centenary of a race run on the desert sands in Palestine in World War I to divert attention from the Australian Light Horse’s charge at Beersheba.

Trainer Mark Oulaghan was unsure as to whether his nine-year-old Nom Du Jeu gelding had the class to defeat his thirteen rivals on Saturday but knew he had him rock hard fit off the back of three consecutive placings in hurdle events. It was that fitness that paid dividends for Master Fin as rider Chris Dell settled him in midfield before moving forward to dispute the pace on the point of the home turn.

Master Fin refused to yield as he got the better of the well fancied Hi I’m Nikita in the last 100m to score at $61 on the TAB Fixed Odds market. Oulaghan was still pinching himself after the race as he took in what he had just seen from his charge who was away from the track for three and a half years after sustaining a tendon injury when winning the Summer Cup (2400m) at Trentham back in September 2016.

“I knew he would be fit enough but he’s nine years old and hasn’t won a flat race for quite a while so that was a big question mark before the race,” he said. “Looking at the field, they were mainly jumpers so I thought if he could revert to his best flat form he was a big show, but it was just whether he could actually do that.

“To be quite honest I wasn’t sure just how he would go but he was good enough to win a Summer Cup earlier on in his career before he got injured. “He was off the scene for ages after he hurt a tendon when he won that race and he did have good form around that time. “We put him out for a spell then got him in and worked him up before we put him out again. “Touch wood, he has been okay since he came back about a year ago but he hadn’t won a race until today.”

Master Fin is owned and bred by Awapuni identity Graeme Martin who Oulaghan believes will be keen to see his charge make the trip to Australia to contest the Jericho Cup. “He probably fits the bill for the race in Australia but I will have to speak to Graeme about that,” Oulaghan said. “I would think he will be keen but we will just have to see how things pan out before any final decisions are made.”

This year there are two special qualifying events run in New Zealand that provide guaranteed entry into the Jericho Cup with the second being raced at Riccarton on Saturday October 24. The 2020 Jericho Cup will be run at Warrnambool on November 29.