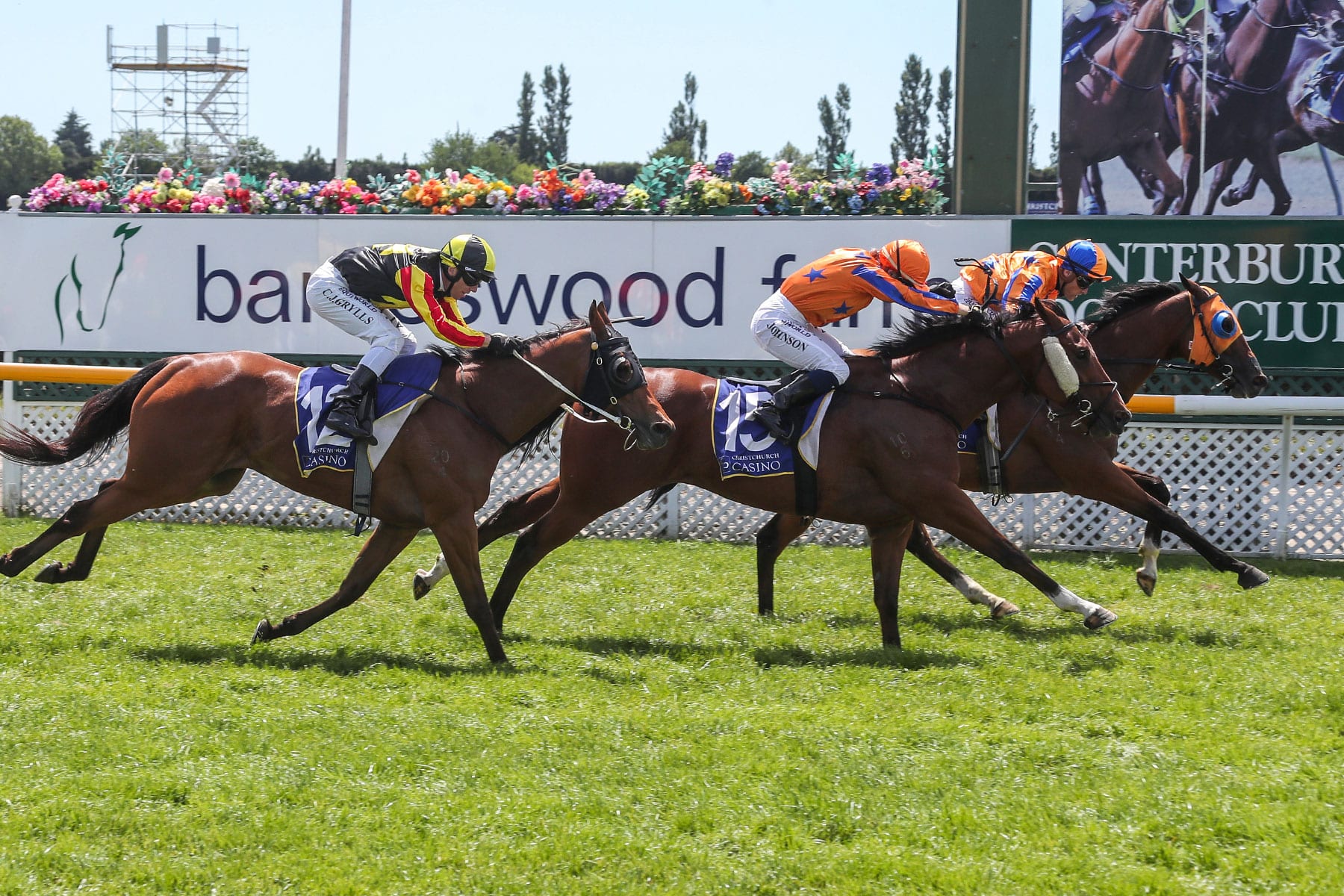 With their usual impeccable timing, the Te Akau Racing team roared into life on the last day of New Zealand Cup Week, winning five races including two of the feature events at Riccarton. Remington and Summer Monsoon got the balling rolling in races four and five before exciting colt Avonallo picked up his first stakes victory with an authoritative performance to take out the Listed Frantic Bloodstock Welcome Stakes (1000m).

Just two races later, Darci Brahma filly Kahma Lass captured the jewel in the crown with a spirited late run to win the Group 1 Barneswood Farm New Zealand 1000 Guineas (1600m) before Markus Aurelius closed out a red letter day with a win in the last race on the card. The icing on the cake was provided by progressive four-year-old Festivity who flashed home late for rider Vinnie Colgan to score over 1200m at Tauranga and make it six of the best for the Matamata stable of trainer Jamie Richards.

Watching proceedings unfold from his beach house in Raglan, Te Akau boss David Ellis CNZM was left with an immense feeling of pride once the dust had settled on the day. “That was the day you want to win races, New Zealand Cup day,” Ellis said.

“It’s one of the biggest, if not the biggest day on the calendar in terms of crowd numbers and the like. “We have a very proud record in the Guineas races at Riccarton, with the win by Kahma Lass our eleventh Guineas success, six in the 2000 Guineas and now five in the 1000 Guineas. “It was our 11th black type win this season with nine in New Zealand and two in Australia and the season has only been going just over three months, so it makes me incredibly proud of how Jamie and the team are going.”

Despite the uncertainties created for the racing industry over the past eight months due to the COVID-19 pandemic, Ellis had been confident the stable was ready to continue on the path of success that had been created in recent years.

“We’ve bought good numbers of yearlings in the last few years and we knew we had a nice team to race,” he said. “We have a lot of exciting young talent coming through including horses like Kahma Lass and Avonallo, who won the two black type races yesterday. “I watched Avonallo’s last run with Jamie where he finished second and he turned to me and said they won’t beat him in the Welcome Stakes.

“I think that’s the eighth time we have won the race and it does set the horse up nicely for a tilt at the Karaka Million in January. “He’s by a young sire in Belardo who is looking very exciting and I think he is just made for the Karaka Million.”

While he may not have been in attendance at Riccarton, Ellis has not been resting on his laurels as he prepares for the two-day New Zealand Ready To Run Sale of two-year-olds that kicks off at Karaka on Wednesday. “We’re pretty excited about the sale as we always buy two or three horses from it,” he said.

“It’s not our main sale as we do like concentrating on the yearlings but we have had some great success with three Group 1 winners coming out of it in Hall Of Fame, Gingernuts and Te Akau Shark. “We’ve been able to prepare for the sale the same way we always do and I do think this week will offer some unique opportunities for buyers to select and purchase some really lovely horses with beautiful pedigrees.

“We’ve also managed to see some yearlings already however we don’t really start on that work until the first week of December. “We will be heading down to the Central Districts for a tour down there and also seeing some of the large upper North Island drafts before Christmas and then finishing off in early January.”

Ellis also acknowledged the stable was still planning on establishing an Australian base in the future but not until the ramifications of the COVID-19 situation had settled down.

“We definitely intend to set something up in Australia but not until a bubble with Australia has been confirmed,” he said. “We are focussed on taking a nice team to Sydney in the Autumn and then Brisbane in the winter before we look any further down the track.”