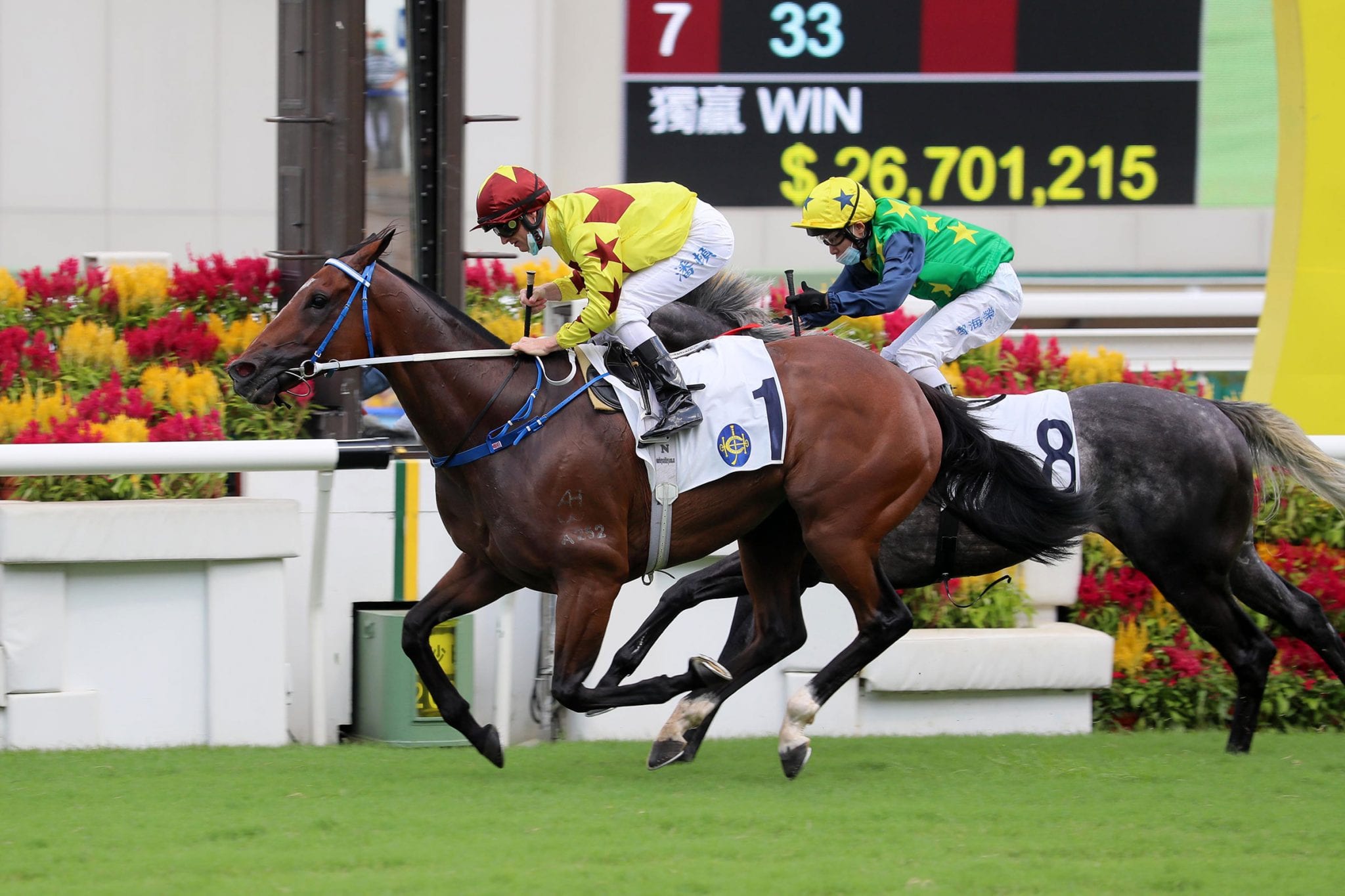 Southern Legend’s (133lb) legacy as one of Hong Kong’s most dependable performers in recent times was enhanced this afternoon (Sunday, 20 June) at Sha Tin with victory in the Group 3 Premier Plate Handicap (1800m) for jockey Zac Purton and trainer Caspar Fownes.

After shedding his maiden tag over five years ago in Australia, the bay’s storied career has encompassed two successful Singapore raids, a sixth-place finish to Almond Eye in the 2019 Group 1 Dubai Turf (1800m) as well as his head-bobbing triumph over Beauty Generation in last year’s Group 1 FWD Champions Mile (1600m).

And, having pushed Golden Sixty to within a head in January’s Group 1 Stewards’ Cup (1600m), the evergreen eight-year-old – who has placed four times at the top-level this season – got his reward for consistency with a half-length triumph in today’s HK$3.5 million contest over Reliable Team (113lb) and Fast Most Furious (113lb), respectively.

“You’d like a few more like him in your stable – he’s just a brute, he’s got so much heart and he deserved that victory. He’s been so consistent all his career and then in the last 10 runs he’s been in the money each time, so he deserved that win,” Fownes said.

On a day when his trainer flourished with a clean-sweep of both Group 3s and five wins in all thanks to Joy Master, Lucky Quality, Sky Field and Killer Bee – Southern Legend defied a hefty impost and a rising age to give Fownes his third consecutive Premier Plate win and fourth overall after Thumbs Up (2012), Rise High (2019) and Dances With Dragon (2020).

This afternoon’s triumph was Purton’s third aboard the Not A Single Doubt gelding, having guided him to consecutive SIN Group 1 Kranji Mile triumphs (2018 & 2019) at Kranji Racecourse in Singapore.

“I actually felt comfortable all the way, more so at the 600 metres – he was just giving me the feel that he was in the right frame of mind today and he actually got there pretty comfortably – the last 200 metres, he just coasted to the line,” Purton said.

Today’s win enhanced the gelding’s Hong Kong earnings past a whopping HK$59 million after making his debut in the city at the end of May, 2017.

“It’s tremendous, he just keeps on getting better with age. He’s had a fair few plane trips around the world, too, and he just seems to have come back better from every trip – he’s been a good warrior,” Purton said.

Although a soon-to-be nine-year-old, Fownes laid out future plans for his charge, who is in perhaps career-best form with placings in this season’s Group 1 LONGINES Hong Kong Mile, Stewards’ Cup, Group 1 Queen’s Silver Jubilee Cup (1400m) and FWD Champions Mile.

“I’m very happy for Bon – he puts so much into the game of racing that he deserves these types of horses and he deserves the best,” Fownes said of owner Boniface Ho, one of Hong Kong’s most prominent owners.

“Bon’s left it to me, I’ll make that decision when I feel he’s had enough. You can see he’s still got his passion to race and he knuckled down giving those young horses a lot of weight and he attacked the line like a bloody tiger, which is what you want to see these old horses do.

“Obviously he’s going to be nine in about six weeks and we’ll give him a nice prep for next season and see what he can do, there’s a lot of money still on offer here in Hong Kong and we’ll just offset that with how the horse is. Obviously if he’s had enough, we’ll just retire him,” Fownes outlined.

Today’s win was Fownes’ second in conjunction with Purton this season after Guy Dragon prevailed at Happy Valley last September.

“Zac is a great rider, so it was good to team up with him and get that result. He’s done well on the horse before so it was a good result all round,” Fownes said.

Fownes leads by seven wins at the top of the trainers’ championship thanks to today’s five-timer on 74 wins, while John Size sits second on 67 wins.