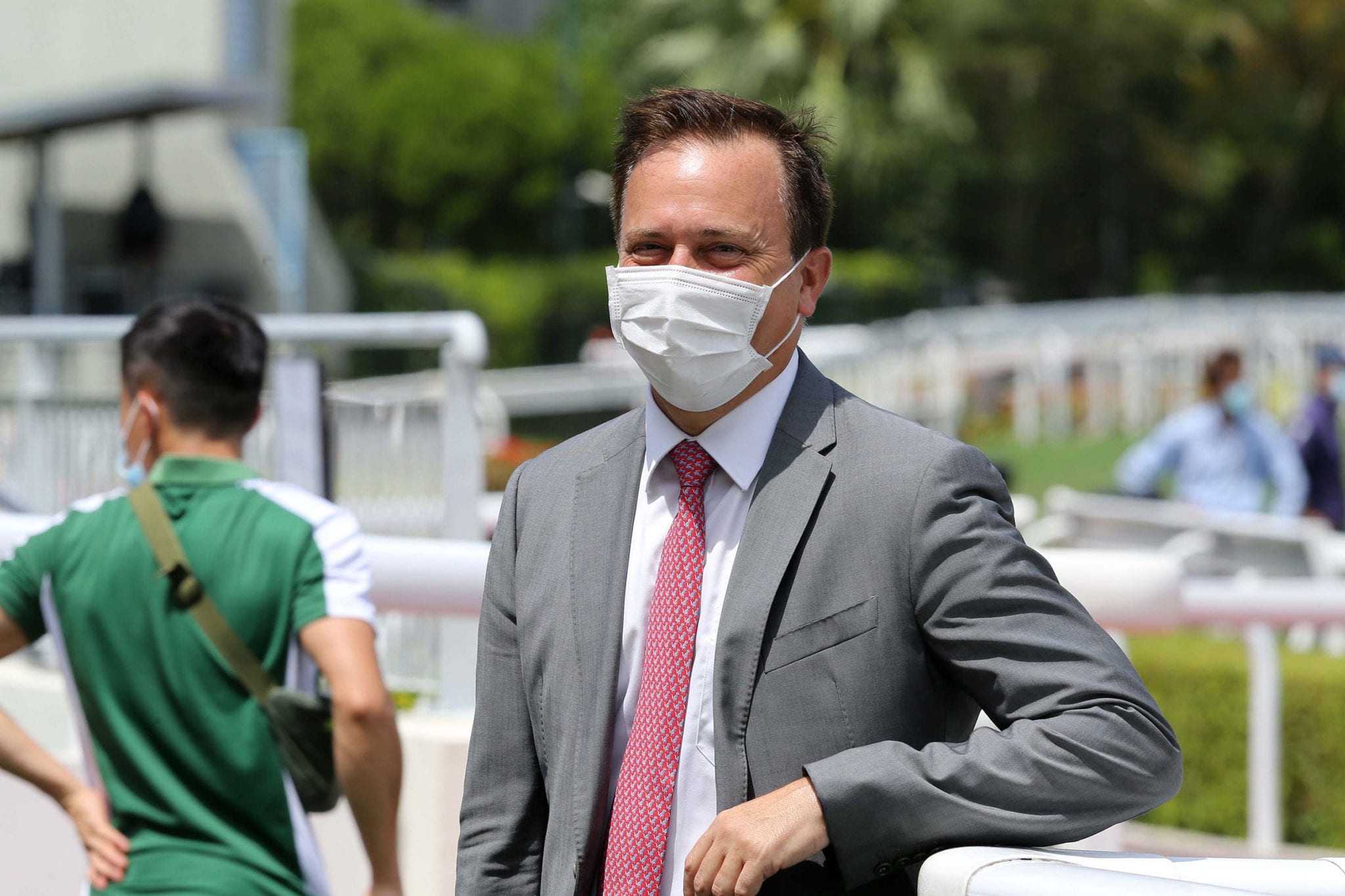 In a phenomenal show of strength crowned by victories in the final two Group races of the Hong Kong season, Caspar Fownes has taken a decisive upper hand in the battle with John Size for the 2020/21 Hong Kong trainers’ championship with a quintet at Sha Tin on Sunday (20 June).

Bidding for a fourth title, Fownes leads 11-time champion Size 74-67 with seven meetings left in the current term after his imposing 12-horse string dominated with five victories and two seconds across ten races.

Champion in 2006/07, 2008/09 and 2013/14, Fownes entered the 81st meeting of the season with a two-win buffer over Size. By day’s end, he had boosted his stocks in spectacular fashion with victories by Joy Master, Lucky Quality, Southern Legend, Sky Field and Killer Bee to equal his previous best haul at Sha Tin.

“We needed to do something good, something big that makes a statement and we’ve done that today. Now it’s good luck, we’re there and we’ve got the momentum going. I’ve got a lot more winners coming so I’m happy, feeling good. It’s been a great day,” Fownes said.

“I’ve told you how good he is and it was wonderful to see Blake get the result with him. He settled beautifully for Blake last start and again today over an extra furlong he settled really well. In the run ‘I said ‘I know what he can do’. The best is yet to come with him, so it’s wonderful,” Fownes said.

Shinn enjoyed a trouble-free trip before unleashing the gelding.

“Caspar just emphasised to switch the horse off and use his best asset, which is his turn of foot. The horse did everything right,” the Melbourne Cup-winning jockey said.

“When I produced him, he picked them up effortlessly and ran right through the line. It’s great because we’ve all believed in this horse’s ability and he stood up and beat a quality field. It’s just fantastic to win a Group race here in Hong Kong.”

Describing Sky Field’s acceleration as “electric”, Shinn said the chestnut “feels like a genuine Group 1 horse and he’s been placed in the sprint two runs ago at the highest level in Hong Kong and from the first time I got on him, I thought he was a Group 1 horse.”

“Even though he didn’t win a Group 1 today, I’m sure next preparation he’s only going to flourish and become a really big force in the coming season,” the Australian said.

“To win this race here today for Caspar, who’s been a supporter from day one, is very meaningful. It’s Caspar’s day today.”

“He was great, he’s had a huge season and it was a great effort to come back again at the end of the year. You know how hot it is and we’ve kept them up all season,” he said.

Joao Moreira, who extended his lead in the jockeys’ championship to 25 over Zac Purton with a treble, remains upbeat about Killer Bee, who again showed a brilliant turn of foot after being reluctant to load before lifting the Class 3 Amber Handicap (1200m).

“He’s a very smart horse, still a bit green and does things wrong but where he is at the moment, he gives us the confidence he will go very high in the ratings,” Moreira said, noting the gelding’s pre-race antics “proves to me he is still very immature and doesn’t know what his job is and nothing like time. With time, he will do things better.”

Fownes said: “He’s a good horse. I think we’re going to have a really exciting horse for the future. He looks to be very progressive. He’s a gentleman inside the stable, just to put the saddle on (and) he’s a little bit naughty.”

David Hall-trained Swot Troopers Wind denied Fownes and Vincent Ho on Tailor Made in the second race – the Class 4 Peridot Handicap (2000m) – under a superb front-running ride by Matthew Poon to post his second win in four starts.

But the Fownes onslaught resumed in the Class 4 Jasper Handicap (1000m) when Moreira piloted injury-prone Lucky Quality to victory over first-starter Flying Dragon and Spicy So Good.

“I’m feeling happy because it’s been a long time since my last winner (Wine And Wine at Happy Valley),” Maia said after posting his fifth win since arriving from Singapore in February.

Matthew Chadwick produced a wonderful ride on Benno Yung’s Hinchinlove from barrier 14 to deny Size and Moreira’s Lucky Express in a tight finish to the Class 2 Alexandrite Handicap (1400m).

Chadwick found the rail on the gelding, rating the bay to perfection before surviving by a short head.

Hall posted a double when Purton drove Maldives to success in the Class 3 Aquamarine Handicap (1400m).