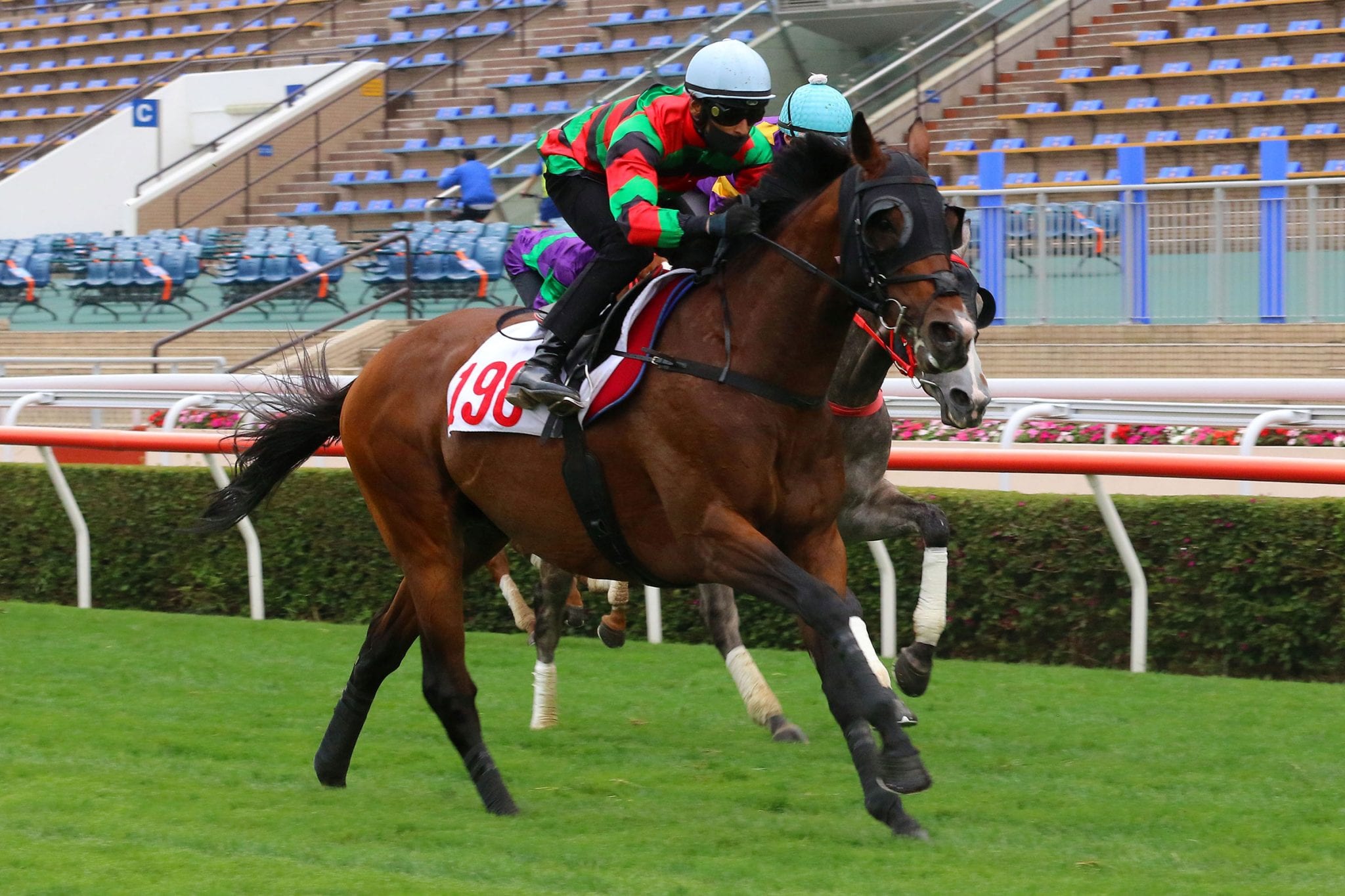 The regally bred colt out of Australian star mare Atlantic Jewel rolled past the post in 1m 35.69s (1600m, turf) under the urgings of jockey Karis Teetan – much to the satisfaction of trainer Douglas Whyte – ahead of fellow Derby candidates Silver Express, Excellent Proposal, Packing Waltham and two-time Australian Group 1 winner Shadow Hero.

“He’s come on from his last run and that trial today will probably just top him off – he’s a big horse and he’s a colt still, so he’s going to need every ounce of work that I can give him.

“He’ll go home now and probably come on slightly from that trial – it’s all systems go from here on in,” Whyte said.

The high-profile Irish import, formerly under the care of Aidan O’Brien, finished seventh in the 2020 Group 1 Derby Stakes (2405m) at Epsom Downs and was a Group 3 winner at Ascot in the Hampton Court Stakes (1993m) prior to that, but was well beaten in both of his first two runs in Hong Kong before flashing into second behind Healthy Happy in the middle leg of the Four-Year-Old Classic Series.

“He’s another European horse who has progressively improved with time and with each and every work out and race that I’ve given him.

“I think his last run was probably the fittest I’ve ever had him and the result suggested that,” Whyte said.

The 97-rater, who is still a colt, is one of two gallopers by super sire Galileo in Hong Kong, both are under the care of Whyte and both are former O’Brien trainees. The other is Ode To Joy, a two-time winner in Ireland prior to export.

“He’s (Russian Emperor) a really kind and gentle horse – he has the right frame of mind for a colt, there’s no nastiness about him and he’s very eager and willing to do whatever you ask of him,” Whyte said.

Also stepping out to trial for Whyte this morning was Congratulation, the only son of American Pharoah in Hong Kong – and one of the more intriguing Derby hopefuls.

“He’s an interesting horse – he arrived here slightly later and again the European horses they just take that bit of time, they hit the ground here and it shortens them up slightly, they aren’t used to the firm tracks,” Whyte said.

“I thought his first run was very pleasing, he seems to have come on from that, Tony Piccone (jockey) was very satisfied with the way he hit the line in this morning’s trial,” Whyte said.

Under Piccone, the American-bred bay crossed the line fourth behind two-time Hong Kong winner True Legend who clocked 1m 09.26s for the 1200m gallop on the dirt.

“He’ll improve from that – I think his biggest asset is that he has a great turn of foot,” Whyte said.

Healthy Happy, winner of the Hong Kong Classic Cup featured in the same trial as Congratulation, finishing near the rear under Alexis Badel.

“I was just trying to make him relax and he switched off very well, his attitude was very good – he was also much more relaxed behind the gate and his action in the trial was good,” Badel said.

After leading throughout to claim the second leg of the Four-Year-Old Classic Series over 1800m, the Zoustar gelding became the first of his sire’s progeny to win beyond 1200m in Hong Kong.

“I was happy with the way he relaxed – he probably relaxed a bit too much at the home turn but that’s what I was looking for actually, he’s obviously going for a longer trip,” Badel said.

“I just asked Alexis (Badel) to give him an easy trial, I prefer to trial him on the dirt – its better,” trainer Frankie Lor said.