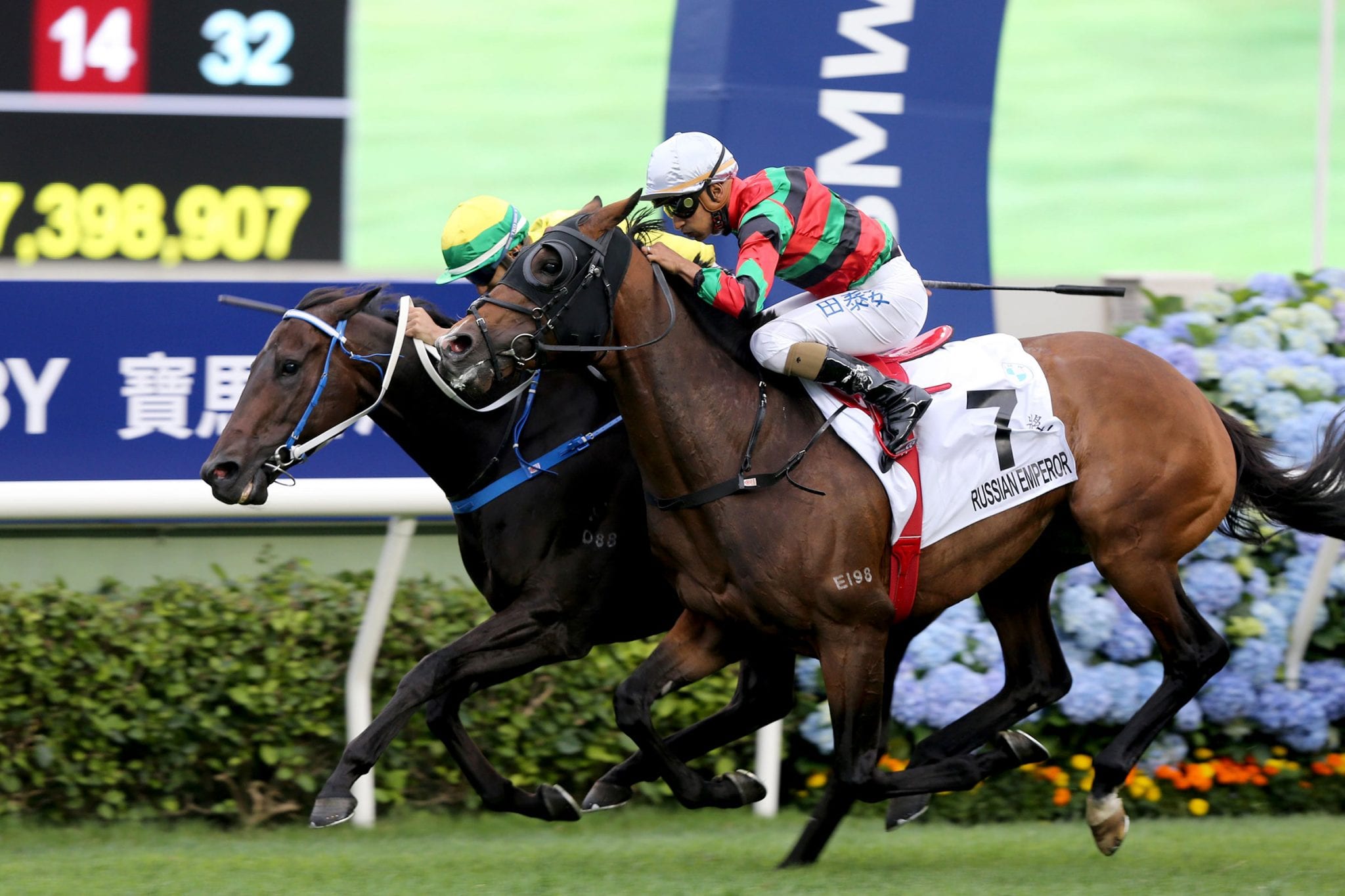 Denied by Sky Darci in an epic BMW Hong Kong Derby (2000m) last month, Russian Emperor and Panfield will resume a burgeoning rivalry at Sha Tin on Sunday (2 May) when the classy imports clash in the Group 3 Queen Mother Memorial Cup Handicap (2400m) at Sha Tin.

Eclipsed by only a head in the 21 March Classic, runner-up Russian Emperor was chased to the line by Panfield, who finished third, only three quarters of a length from Sky Darci.

The performances of both horses left both Douglas Whyte (Russian Emperor) and Tony Millard (Panfield) pondering what might have been with more favourable passages late in the race.

Rather than dwelling on the past, Whyte is confident Russian Emperor – a son of Galileo and champion Australian mare Atlantic Jewel – has recovered fully from the rigours of the Derby.

“He’s come out of the Derby really well. I gave him an easy time after that and I’ve set him up for this race. He trialled (on 20 April) really well, I’m happy with the way he came out of that trial and it’s looking very positive for the weekend.”

Given the Irish-bred colt’s stout performances in England, where he was seventh in the Epsom Derby (2405m) last year for Aidan O’Brien, Whyte is confident the four-year-old will cope with Sunday’s assignment.

“On his pedigree and on his form overseas, 2400 metres should be fine. Obviously, Hong Kong injects a lot of speed into horses. He showed that last time in the Derby when he was sitting up there in third and fourth whereas before that he couldn’t keep up,” Whyte said.

“It’s going to be a learning test and experience for all of us but the way he’s working he should get the distance.

“I put the blinkers on purely to take hold and focus, and that’s the reason for that, so there’s no worries about him settling.

“It’s more about him showing the turn of foot that he showed last time. You can extend these horses over a distance and sometimes they don’t have the same turn of foot. But he’s got the stamina to offset that.

“If he runs well, he’ll head to the (Standard Chartered) Champions & Chater Cup (on 23 May) and then be done for the season and we’ll look to better things for next season.”

Dual Derby-winning trainer Tony Millard has no staying concerns over Panfield, a triple Group 1-winner in Chile, including success in the El Ensayo Mega over 2400m.

“He’s come back well, I’m particularly happy with him. He pulled up well from the Derby,” Millard said. “He was a touch unlucky in the Derby and I think he’s coming into this race well. The distance is not a problem. He’s won over that distance before in Chile.”

Panfield (121lb) will start from barrier three for Joao Moreira.

“Joao is particularly happy with him. He rode him in the barrier trial (23 April) and he’s happy with the way he’s going,” Millard said. “The opposition is quite tough. We’ve got the Derby second horse (Russian Emperor), he’s the boom horse.”