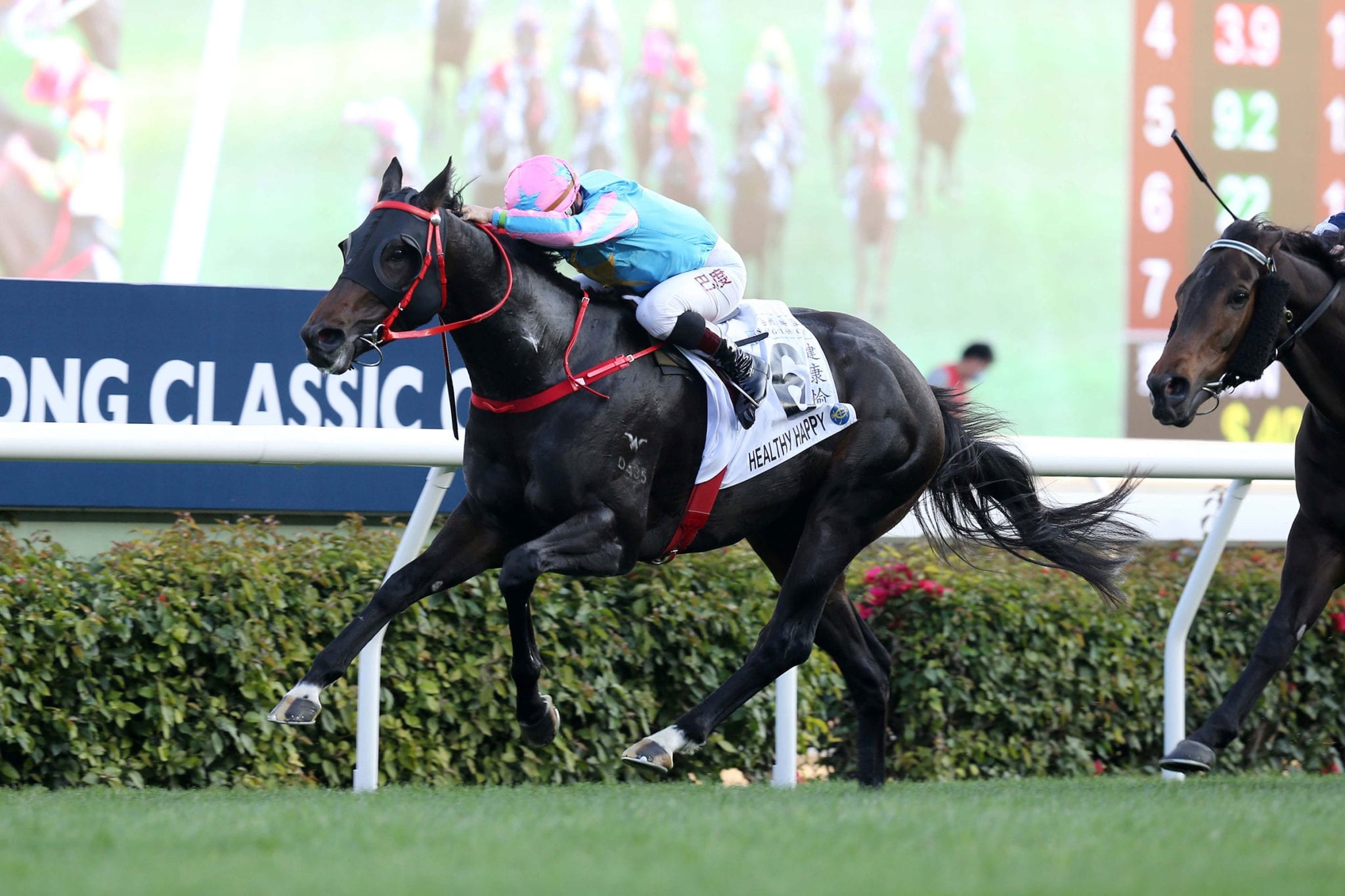 Uniting with the former Australian galloper for the first time after Vincent Ho picked up the ride on Tourbillon Diamond, Badel dictated tactics from the front to deliver Healthy Happy by a neck from Russian Emperor with Shadow Hero a further nose away in third.

The Frenchman’s daring tactics, crowned by a pedestrian section between the 1200m and 800m in just 24.46s, delighted Lor.

“I think the horse had a chance but I wasn’t sure he could win because it was the first time at 1800m,” Lor said. “But I think the jockey is really smart, he didn’t go that fast, so I can say I ‘steal’ the race.”

Happy Healthy raced in Australia as Leviathan for Peter and Paul Snowden and, until Sunday, had not been tried beyond 1600m.

Badel detected from the pre-race preliminary he was on the perfect horse to be daring – assuming nobody else wanted to lead.

“It’s not very easy but I had the horse for this tactic to lead and going into the gate, the horse was so relaxed. I was very happy if no-one wanted to lead, I was very happy to do so and this just happened like a dream,” he said.

“The horse is very talented from the front. He’s a very good horse, he’s got great abilities. I am very grateful to get the ride on him.

“He’s such a big horse, he’s got a very big action and a very good attitude, I wanted to give him a comfortable race with a lot of space and hopefully keep the momentum.

“I was just happy to let my horse go because he’s obviously a very big horse and I knew he was going to stay on well. He was also very relaxed in front.

“It allowed him to take a very big breath before the effort and then he kept on well.”

Both Lor and Badel expect the 2000m of the BMW Hong Kong Derby on 21 March won’t be an issue for the Zoustar gelding.

Douglas Whyte was elated with the performance of Russian Emperor, a son of Galileo and champion Australian mare Atlantic Jewel.

“I always said the Derby would be his day. The blinkers have certainly got his mind switched on,” Whyte said.

“The winner had it all his way, the second sectional was 24.46s and even though he still showed greenness, we’re on track.”

David Hayes was similarly encouraged by the effort of Shadow Hero, who produced his best Hong Kong performance since leaving Australia, where he won two Group 1s.

“Very happy with that,” Hayes said.

Trainer Tony Millard could have a two-pronged attack in next month’s Classic after Panfield’s fitting victory in the Class 2 Ambitious Dragon Handicap (2000m) – a race named in honour of one of Millard’s two Derby champions.

“He’s a proper Derby horse and if they went a little harder here, he would have won by more. He’s the real deal,” Millard, who celebrated a Sha Tin treble, said.

“That was dominant and he had a clean run and it was the first time we’ve been able to see that. He’s pretty good.

“We’re a little bit unlucky with Maximus (who was scratched from the Hong Kong Classic Cup because of injury) because I think Maximus is as good as this horse (Panfield) – but Maximus does a lot of things wrong.

“Maximus will run on the 7th (of March) – it’s the same route I took with my first Derby winner Keen Winner (in 2000). I’ve been down that route, so we’ll see what happens.”

John Size moved to the top of the trainers’ championship with a double – Waikuku in the Group 1 Queen’s Silver Jubilee Cup and Tempest Express in the Class 3 Werther Handicap (1400m) for Antoine Hamelin.