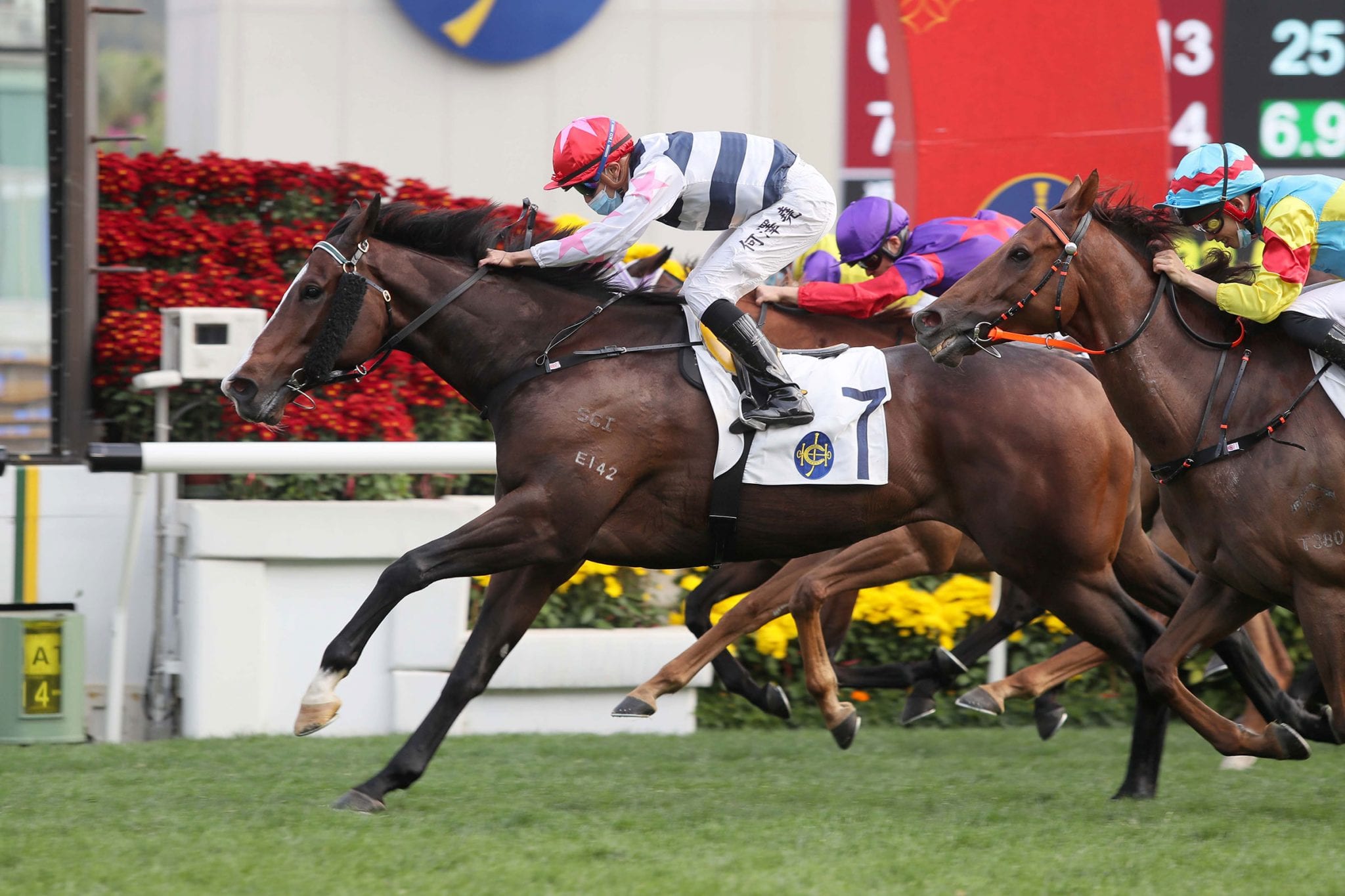 A two-time winner already in Hong Kong, Master Montaro will be unleashed by Hayes for the fifth time but for the first time in Class 2 as he aims to continue his ascent up the handicap in a hot edition of the Rapper Dragon Handicap (1600m).

An eye-catching winner last start under Vincent Ho over 1400m, the gifted Toronado gelding will contest the mile for the first time this weekend.

“He’s a nice big horse who relaxes early – he finished off strongly last start,” Ho said. “I feel like he builds up his momentum, he’s got a big stride so he can run home quite faster than the other horses.”

After arriving in Hong Kong with an unblemished record in Australia, the 85-rater has added two more wins to his resume in his new home over 1200m and 1400m.

“I don’t think it’s a problem (stepping up in class and to the mile), he’s a good horse and he’s been working well – he trialled well, the mile should suit him more,” Ho said.

With a powerful finish in his arsenal, the four-year-old will depart from gate four against 13 rivals but unlike his debut win in Hong Kong he no longer sports the blinkers and instead carries side winkers.

“I’m happy with him, sometimes as a four-year-old the younger horses can be a little bit inconsistent but he’s in good form now – I galloped him and he feels well,” Ho said.

Known as Eric The Eel prior to export, the bay placed in the Group 1 Australian Derby (2400m) at Randwick and this Sunday sets off from gate 11 against 13 rivals.

“I don’t mind the draw at all at least we won’t be stuck – it’s better than gate one especially for a horse who can relax early,” the 30-year-old said.

Ho won the Derby last year aboard Golden Sixty and he remains hopeful of adding a second to his collection.

“It’s a Classic race and it’s a privilege to win the Derby, especially on Golden Sixty last year – I’m looking forward to the race this year and hopefully we can add another,” Ho said.

Earlier on the card in the Class 4 Super Satin Handicap (1200m), another of Hayes’ talented juveniles Fantastic Treasure steps out in his bid to remain unbeaten in Hong Kong.

The Written Tycoon three-year-old charged from the rear of the field first-up to score impressively by a nose at +2500 under jockey Chad Schofield in February.

“His first win impressed me, he had a wide gate and we decided to just take him back and drop him in him – he took all of the gaps and he did everything right,” Schofield said. “He was very strong late.”

The gelding was handed five rating points for his debut win and now sits on a mark of 57 after arriving in Hong Kong as an unraced PPG (Privately Purchased Griffin) from Australia.

“We have a slightly better draw this time and he seems to be working really well – I’m looking forward to riding him again.

“He showed that he has a nice turn of foot the other day and hopefully he’s come on from the run and he can do it again this Sunday,” Schofield said.

This Sunday, Schofield also pairs with the Panfield in the Hong Kong Derby for trainer Tony Millard.

“I think he’s got a good chance, I was a little bit disappointed with the draw however I thought his latest trial leading into the Derby was very good – he gave me a terrific feel and I think he’s a live hope,” the 27-year-old said.

Schofield returned from a back injury two meetings ago and has five rides this weekend including last-start winner Flagship Glory for trainer Frankie Lor in the Class 2 Rapper Dragon Handicap (1600m).

“The horse is very straightforward, he’s uncomplicated – he’s an easy horse to ride and he cruises very well, he’s got a big action and a good attitude,” Badel said.

If successful, the gelding would become the first of his sire’s progeny in Hong Kong to win over 2000m.

“It’s a doubt for many runners (the 2000 metres) in the race but he’s won already over 1800 metres and he did a good job – I can only be confident and there is no doubt about his quality,” he said.