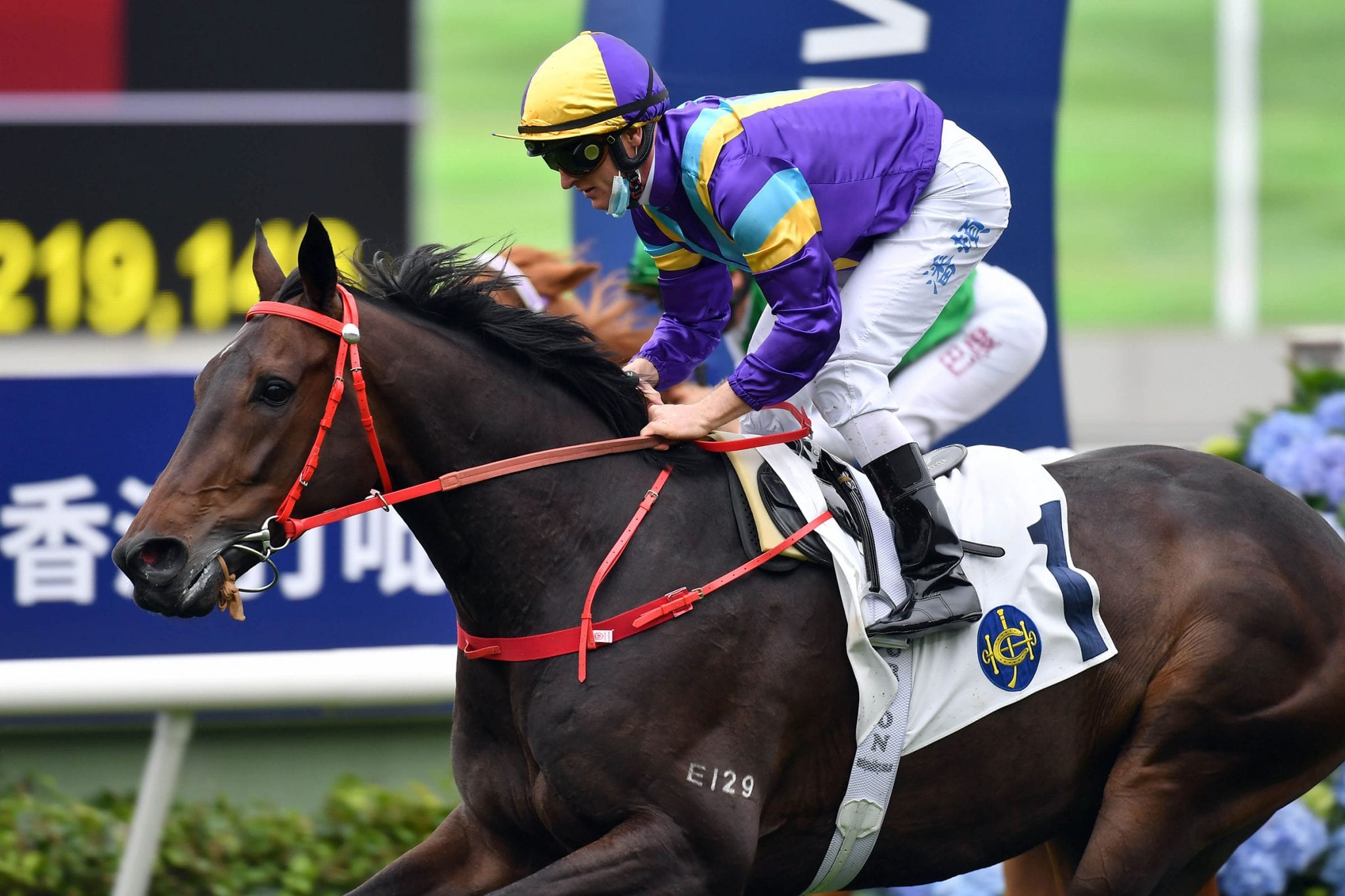 Charity Fun (113lb) has already made a remarkable start to his burgeoning Hong Kong career and this Sunday (2 May) at Sha Tin the War Command gelding will be put to the test with his toughest assignment to date when he lines up against 11 opponents in the Group 3 Queen Mother Memorial Cup Handicap (2400m).

Having already pointed towards a bright future as a rapidly improving stayer with a trio of wins from his first five starts, the four-year-old will this weekend be gambled up in grade as he looks to throw down a challenge which could warrant a top-level tilt in next month’s Group 1 Standard Chartered Champions & Chater Cup (2400m), should connections direct him there.

Gearing up for his first foray over 2400m, the bay has won his past two races in succession under champion jockey Zac Purton, though Purton is unable to make the weight this weekend and instead partners Columbus County (133lb), who lines up as the highest rated horse in the race, 20 points clear of Charity Fun, who slots in on a mark of 92 at the other end of the handicap.

Trained by Danny Shum, Charity Fun pairs with Frenchman Alexis Badel who will ride the gelding with a possible one-pound over his allotted weight from barrier two this Sunday, looking to guide the gelding to his fourth Hong Kong win having previously succeeded over 1800m, 2000m and 2200m at both Happy Valley and Sha Tin.

“The weight he’s going to carry is a huge advantage over 2400 metres but he’s in good form, he looks very fit and seems like he’s a very good horse – everything looks ideal,” Badel said.

Charity Fun is one of six four-year-olds looking to bolster the future of Hong Kong’s staying ranks by becoming the 22nd winner of their age bracket to claim the HK$3.5 million contest, the others in the race are Russian Emperor (124lb), Panfield (121lb), Delightful Laos (116lb), Savaquin (113lb) and Packing Waltham (113lb).

Joao Moreira, who rides Panfield, spoke of the Chilean-bred galloper at trackwork this morning (Friday, 30 April): “He indicates that when there’s more ground for him to cover, that it’s going to be better for him.

“His form overseas has seen him tested over longer distances than what he’s raced over in Hong Kong so far and he has delivered, so I think the extra distance is actually going to suit him even better,” Moreira said.

First run 1982, the Queen Mother Memorial Cup is one of only three mile-and-a-half contests in the Hong Kong programme, along with the Group 1 LONGINES Hong Kong Vase and the upcoming Group 1 Standard Chartered Champions & Chater Cup on 23 May.

Vincent Ho will partner Ho Ho Khan and the duo will depart from gate four.

“This is the right distance but it looks like there’s blue sky all weekend, I just hope there is some rain for him, it’s better for him but he still has ability,” Ho said.

The 99-rater hasn’t won a race since claiming this contest two years ago as a 96-rater. Earlier this season, the bay finished six lengths astern of Mogul in last December’s Hong Kong Vase.

“His rating has been very high so it’s tough for him, he’s a small horse and even in Class 1 and Class 2 he still carries a heavy weight, so it makes it very difficult for him.

“Health-wise, he is fine, Mr Hall has been training him well, he always tries, his form is ok but there’s not many races each season over this distance for him, so we’ll try to make it count,” Ho said.

Fantastic Treasure is one of two-time Hong Kong champion trainer David Hayes’ brightest prospects and this Sunday (2 May) at Sha Tin the Australian-bred youngster will put his unblemished record on the line in the Class 3 Inch Arran Handicap (1400m).

After successfully stepping up to 1400m last start by the narrowest of margins, the speedy son of Written Tycoon will again tackle the seven furlongs but is instead tasked with lugging top-weight as the race’s highest rated contender.

“It’s a big ask now with top weight in Class 3 for a young horse but he’s a horse with a lot of class, a lot of ability and although very few can do it, he’s one that I think can,” jockey Chad Schofield said.

Schofield has paired with the 78-rater for each of his three wins and will again be in the plate this weekend as the pair break from gate two against 12 rivals.

The three-year-old PPG (Privately Purchased Griffin) is eligible for next year’s Four-Year-Old Classic Series which Hayes has previously indicated as a probable long-term target.

“He does (know when to switch it on), he’s turning into a lovely racehorse, he’s switching right off in his races and then he’s really attacking the line strongly, even at his first try over 1400 metres the other day, he did his best work late and that was good to see,” Schofield said.

Earlier on the card, Schofield and Hayes combine with Tronic Mighty, another budding three-year-old from the Australian’s yard who makes his Hong Kong debut in the Class 4 Manicou Handicap (1200m).

“I’ve galloped him a few times, I haven’t ridden him in his barrier trials but he’s a horse with a nice action, he’s not overly big but he moves really nicely, he’s got a lovely draw so we’re hoping he runs well,” Schofield said.

Schofield will also look to maintain Dragon Baby’s perfect record when he tackles the Class 4 Isle Of Man Handicap (1000m) following his stylish debut win down the straight.

“He was impressive, he settled at the rear of the field and as the race went on the better he came underneath me and he was really strong over that last little bit, he powered through the line so it was a very good debut, he remains in the grade and hopefully he can do it again,” he said.