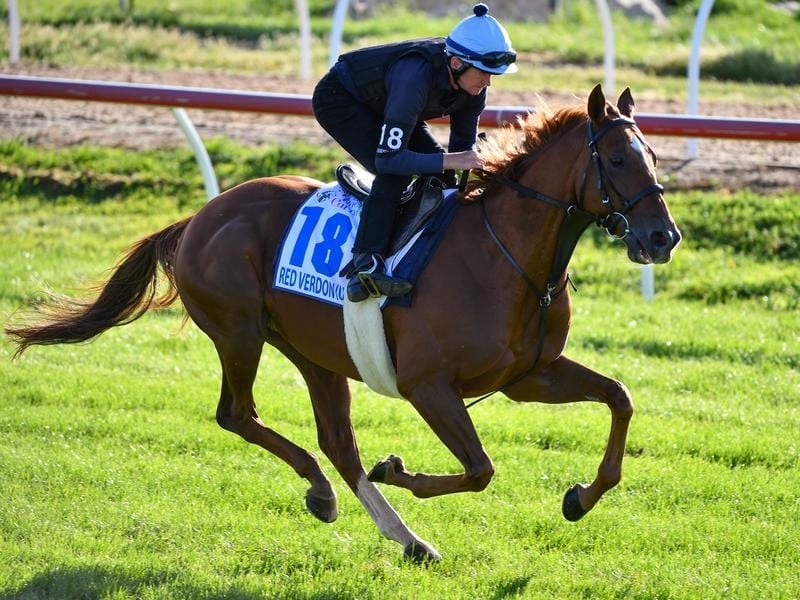 Red Verdon concedes weight to the rest of the field but has the historical form to win the Wild Flower Stakes at 18.30 GMT on Wednesday evening at Kempton. He can be backed at +650 with online bookmakers for the richest race of the day, run over almost one-and-a-half miles on the Polytrack.

The seven-year-old gelding gives weight to the females and horses aged three, and he also carries a 7lbs penalty for winning a Group race. He carries some 16lbs more than Sagrada Familia, who receives all the allowances and up to 12lbs more than the rest of the field.

Red Verdon’s current Official Rating is 104, but he ran to a career high of 113 in three Group races in the spring and summer of 2017. The horse was unplaced in Group 3 races at Chester and Sandown and then ran in the Group 1 Coronation Cup at Epsom, where he finished seven-and-a-quarter lengths behind the winner, Highland Reel, in seventh place.

That form puts Red Verdon head and shoulders above the rest of the field at Kempton this week. The horse maintained that level until finishing sixth in the Ebor last August. There has only been a slight dip in form since then, and he is capable of carrying the weight and winning off the current mark.

Red Verdon was third on his last start, which was a Group 2 race in Italy in October over one mile and four furlongs on heavy going. He was six-and-a-quarter lengths in third place behind the winner, who earned a mark of 110 while Red Verdon ran off 100. That run is underestimated by his last rating, so despite looking vulnerable giving weight, he could still have a few pounds in hand.

You have to go back to November 2017, but Red Verdon is a course-and-distance winner. The Ed Dunlop-trained horse won this race on the Polytrack off a mark of 107. He unperformed slightly in the Premio Jockey Club, which is one of the most prestigious all-aged races in Italy. Red Verdon is the only horse with Group-winning form running in the Listed race at Kempton.

Sextant, Sinjaari and Johnny Drama run off higher marks, but there is very little to choose between the quartet. Sinjaari is the joint-highest rated with Sextant (both 106). Johnny Drama runs of a figure of 105 but is the current +175 favourite with UK racing bookmakers, although the form students may come for Sinjaari before post time. Sextant is vying for fourth favouritism with Red Verdon.

Joseph O’Brien brings Snapraeceps from Ireland, and the booking of William Buick should be noted. When the trainer enters one on the All-Weather in the UK for a relatively modest prize, he’s not coming for the excursion. However, the horse has made no impact in two AW starts. The four runners that make up the field have too much to do on form and ratings.

Red Verdon won the Group 3 John Smith’s Silver Cup Stakes at York in July 2019. He has only dropped marginally in the ratings since that race and can certainly find the level of form required to win another Wild Flower Stakes this season.