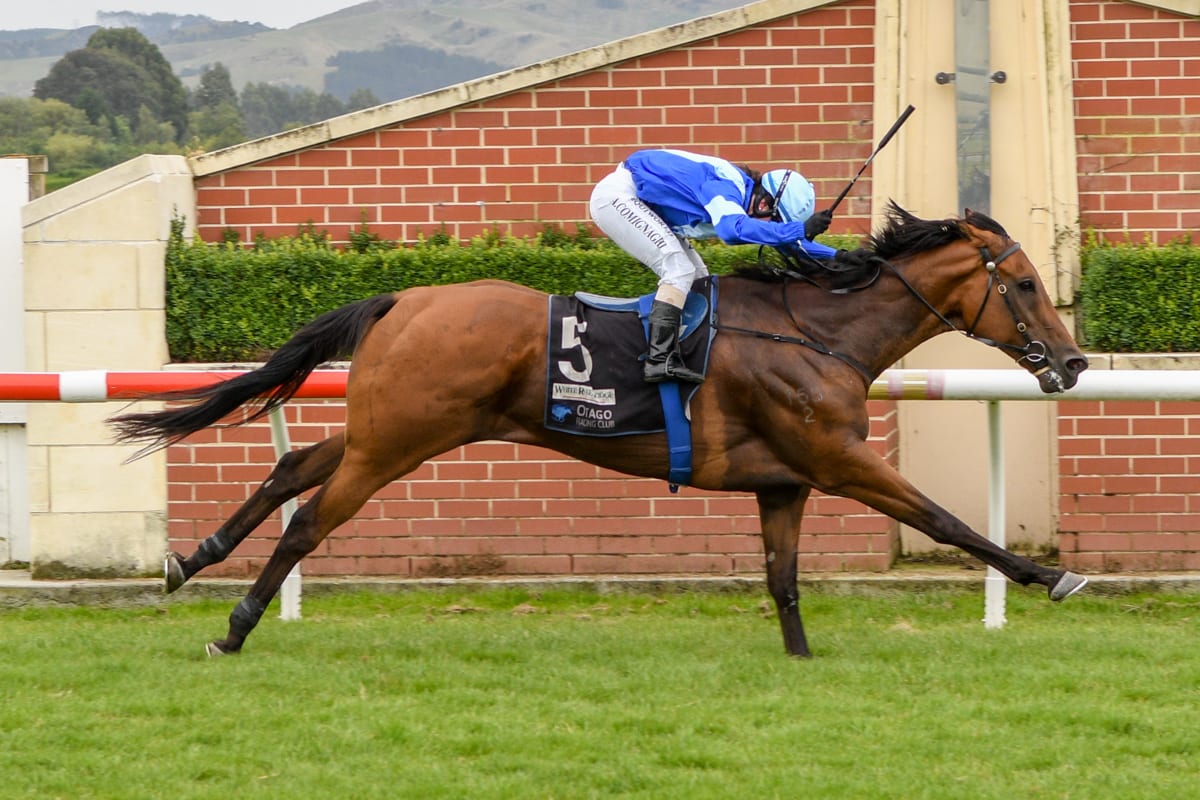 The combination of John & Karen Parsons and rider Tina Comignaghi completed a clean sweep of the stakes races at Wingatui on Saturday when they scored in the day’s feature event, the time-honoured Group 3 White Robe Lodge Weight For Age (1600m).

Riding former North Island galloper Killarney, Comignaghi repeated the front-running tactics that saw her nab the Listed Dunedin Guineas (1500m) on El Gladiador, as she dominated the Group 3 feature from the minute the starting gates opened. In between times Comignaghi had guided Sitarist to her first black type victory in the Listed Dunedin Gold Cup (2400m) and made it a four for the day on Killarney after guiding Scooby home in a rating 65 2200m contest earlier in the day.

The injury-plagued Killarney, who did his early racing from the Cambridge stable of Roger James and Robert Wellwood where he won five of his fifteen starts, transferred to the Parsons team in mid-2019 and has now won twice from a further ten starts for the Balcairn-based operation.

Breeder and co-owner Daniel Nakhle was over the moon with the result for one of his sentimental favourites. “He is such a neat old horse and one we’ve had some real ups and downs with,” he said. “He showed enormous promise early on but an injury to his stifle has plagued him for three seasons so to get this many starts out of him is just amazing.

“Roger and Robert did such a great job trying to keep him sound but, in the end, we were looking at retiring him last year after another setback. “We decided to give him one more try and sent him down to Karen and John and the straight-line type training methods they use. “I just can’t speak highly enough about the effort they have put in to get him back and in shape to win a race like this. “It’s a dream come true and I’m absolutely stoked about it.”

Nakhle was also quick to pay tribute to northern rider Donovan Mansour who is currently off the track after sustaining a serious injury at Te Aroha last year. “I spoke with Donovan during the week and asked him for some thoughts on how he should be ridden,” Nakhle said. “He gave me a list of instructions and I probably drove Karen and John insane with the number of calls I made to them. “After the third phone call I’m picking they were ready to tell me to get lost but full credit to the team and Tina as she rode him absolutely perfectly.”

Bred by Nakhle and his father Elias, Killarney is raced by the pair along with friends John Struthers and Greg Jones. He is out of the well-performed racemare Irish Colleen who won seven races including the Group 2 Concorde Handicap (1200m). “Irish Colleen is still going well and I think it was a good luck omen today as I was down in her paddock this morning giving her and her Zacinto foal a pat and rub for about half an hour,” Nakhle said. “Her Zacinto colt is a little beauty and she is safely in foal to Vadamos so we have a lot to look forward to after the first Vadamos yearlings were so well received at Karaka this year.”

Rich Hill Stud stallion Vadamos was the leading New Zealand-based first season sire during the Book 1 session at the National Yearling Sale this week, selling 21 yearlings at an average of $125,714 and a top price of $330,000.