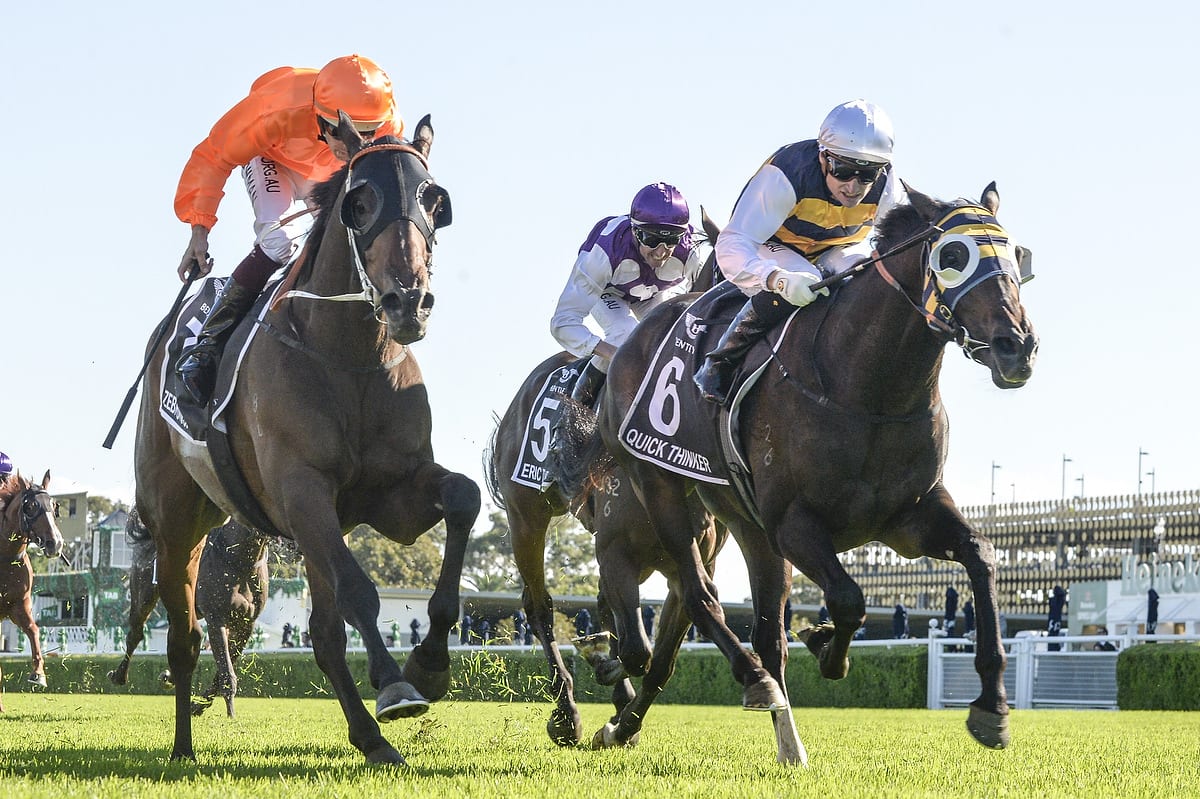 Cambridge trainers Murray Baker and Andrew Forsman look forward to Saturdays even more than usual at present. With New Zealand likely into its final week of a month-long Alert Level 4 lockdown due to the Covid-19 outbreak, the training partners have been watching from afar as Quick Thinker and The Chosen One have represented the stable with distinction at the Sydney Autumn Carnival during that time.

Three-year-old Quick Thinker won both the Group 2 Tulloch Stakes (2000m) and Group 1 Australian Derby (2400m) within the space of seven days, while his year older stablemate beat all but Kiwi rival Etah James in last weekend’s Group 1 Sydney Cup (3200m). “They’ve both performed really well and it’s fair to say they’ve been a highlight for the month,” Baker said.

While The Chosen One has gone for a break, Quick Thinker will round out his campaign when he contests Saturday’s Group 3 Frank Packer Plate (2000m) at Randwick on what is likely to be better ground than the rain-affected conditions of his past two wins.

Stabled with Baker’s son Bjorn at his Warwick Farm base in Sydney, Baker senior is pleased with the reports on the son of So You Think. “Bjorn’s very happy with him,” Baker said. “It’s going to be a different test on what looks like a good track, but he has raced well on a good track before so I just hope he has held his form. “He hasn’t done a lot since his win in the Derby. He has swum a bit and had a breeze up and I think he will be fresh enough for the drop back to 2000m.”

With the three-year-old contest run under set weights and the entire field to carry 56.5kgs, Quick Thinker looks well placed given he is rated 19 points superior to his nearest rival. While having respect for the fresh wave of challengers Quick Thinker is set to face on Saturday, Baker is buoyed by the good constitution of his colt and is not concerned by running three times in four weeks. “He is quite a tough horse,” he said. “As you see in his races, he is very competitive. It doesn’t seem to worry him at all. He is a great feeder and there is no reason why he shouldn’t run. “We will get this one out of the way and give him a spell.”

The winner of in excess of $1 million in prizemoney from his 11 career starts, Quick Thinker has been installed a $2 favourite in the Frank Packer Plate. While Baker’s name is now synonymous with the Australian Derby and the Tulloch Stakes, having won both races on five occasions, he has also won the Frank Packer Plate with two of his last three runners in the race.

Quick Thinker’s travelling companion The Chosen One won last year’s edition, after a luckless fourth placing in the Derby, while Usainity, a son of Zed, was successful for Baker in 2013. The Cambridge trainers can also take some credit for the win of Mongolian Wolf in the Frank Packer Plate in 2017, with the son of Pluck successful for Darren Weir just a matter of weeks after his sale from Baker and Forsman’s stable.

Meanwhile, Baker was delighted to see his son Bjorn notch a century of wins across the Tasman for the fourth time in the past five seasons when Ocean Emperor and Canasta saluted on the Kensington track on Wednesday. “It was good to see him get to 100 wins,” Baker said. “A lot of those are metropolitan wins and they aren’t easy to win.”

While 2020 has been a stinker for most, Bjorn Baker’s team have been airborne since the New Year, with an incredible metropolitan strike-rate. The Warwick Farm trainer has sent out 83 runners on city tracks for 21 winners at a strike-rate of 24.7%.