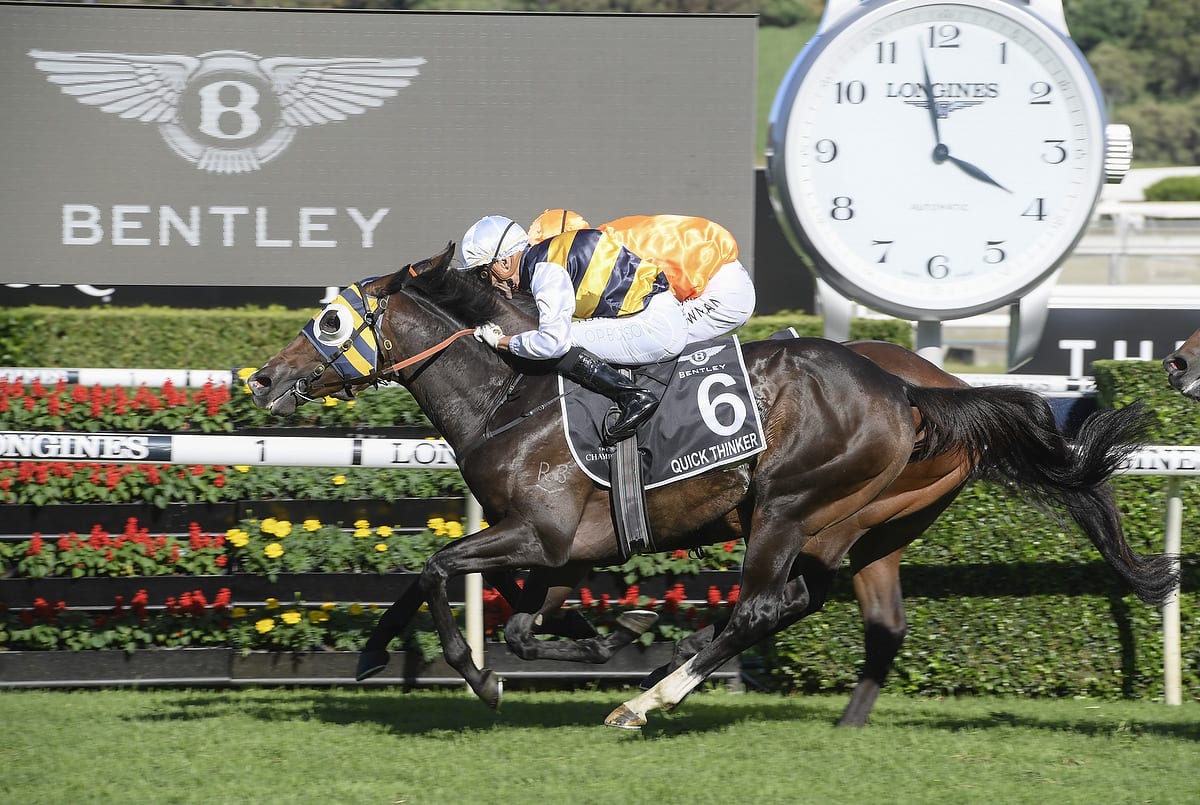 Cambridge trainers Murray Baker and Andrew Forsman have done it again. Their names are synonymous with Derby success and the Kiwi conditioners applied their deft touch to Quick Thinker, who became Baker’s fifth Group 1 Australian Derby (2400m) winner when proving too strong for his rivals in an energy-sapping contest at Randwick on Saturday.

A week ago, Quick Thinker won the Group 2 Tulloch Stakes (2000m), a race that has now provided the last four Australian Derby winners, and once again it provided the quinella, with New Zealand-bred Zebrowski showing plenty of intestinal fortitude to fight on for second.

Baker and Forsman called upon the riding services of compatriot Opie Bosson, whose calm demeanor in a hot race also proved crucial. When asked what a fifth Australian Derby win meant, Baker was typically quick-witted. “It feels better than four and not as good as six,” Baker quipped. “It was a brave effort. “It was a very good ride. There’s no one like Opie Bosson for the big occasions but the horse was very dogged.

“I’ve always said that New Zealand staying three-year-olds in the autumn are mature and they’re very competitive. “I think with some of the staying horses you don’t want to push them too hard in the spring. “Naturally, they have ability and you think they’re going to kick-on and win big races, but the autumn is so often when our horses really shine.”

It marked the second official Australian Derby win for Forsman, who trains in partnership with Baker, despite the junior member of the partnership having played a pivotal role in the Cambridge stable for more than a decade. “Andrew has done a massive job. He always had a lot of faith in this horse and said he was a very determined character,” Baker said.

Bosson claimed his second Australian Derby after winning on Mongolian Khan. “Murray Baker is a genius getting his horses ready for this race,” Bosson said. “He rang me yesterday morning and said the horse is rock hard fit and he’ll run a huge race. “To be honest, he pulled my arms out the whole race. He didn’t come off the bit until we got to about the half mile. “I thought we might have done too much in the running but then the Murray Baker fitness kicked in.”

Bosson has based himself in Sydney for the autumn carnival and wins such as the Derby make the sacrifice of being away from his family in New Zealand a bit easier. It was also the second Derby winner Baker and Forsman have prepared for OTI Racing’s Terry Henderson, with Vin De Dance successful in the 2018 Group 1 New Zealand Derby (2400m).

Baker said the association with Henderson first started when he sold him a future classic winner that excelled in the care of David Hayes. “I first became associated with Terry Henderson when I sold him a horse called Kibbutz, who went on to win the VRC Derby (Group 1, 2500m). “He ran third in the Champagne Stakes (Listed, 1600m) for me and I told Terry I thought he was a very mature horse that could win the Victorian Derby, and he did.”

Baker said given the uncertain times, a race like the Group 3 Frank Packer Plate (2000m) could be a possibility but he would be speaking with Henderson before making further plans. “There might be another race, but we will just see how he comes through the run first,” he said.

Meanwhile, stablemate The Chosen One got a pass-mark when unplaced in the Group 2 Chairman’s Quality (2600m) on the rain-affected track. “He didn’t handle the track but he ran on well for seventh,” Baker said.