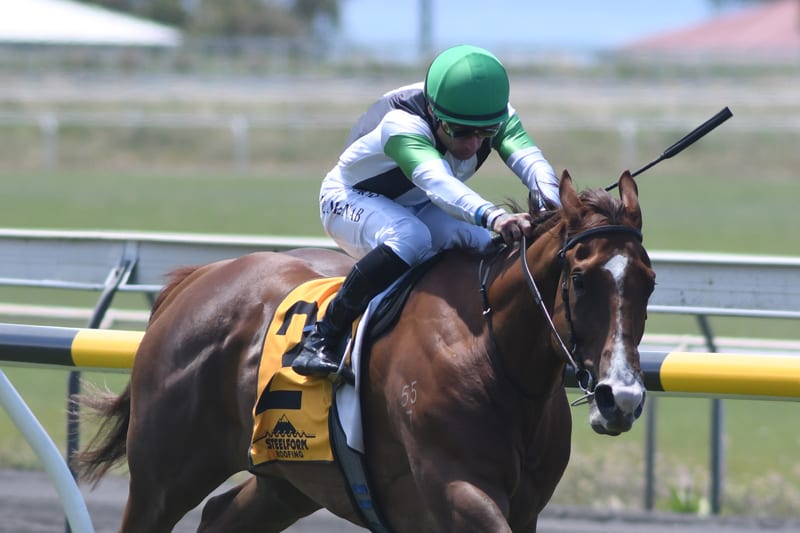 Promising three-year-old galloper Bentayga shook off the effects of a pre-race scare to register his first victory at New Plymouth on Sunday. The Tony Pike-trained runner fired up on his way to the start and took rider Michael McNab for an extended preliminary before being captured and returned to the starting gates.

Approved to start by the stipendiary stewards after undergoing a vet check, the good looking chestnut Zacinto gelding showed his rivals a clean pair of heels in the 1400m contest, leading at a steady tempo before dashing clear in the run home to win untouched by just over four lengths.

Stable representative Dean Williams admitted his heart was in his mouth awaiting the all-clear to run but had expected a good performance from the horse after he took plenty of benefit from his debut effort for third at Tauranga a fortnight ago. “He’s been a bit of a work in progress as he has taken a couple of preps to work it all out,” Williams said.

“He was still pretty green today and he took off on Michael on his way to the start, which got the blood pumping. “I spoke to the stipes and they were very close to scratching him, but thankfully they didn’t and he got the job done for us. “He has a very good constitution on him so hopefully he can go on further in this prep and we can look at some of the nice three-year-old races with him.”

A $120,000 purchase by Waikato Bloodstock from the Prima Park draft at the 2019 NZB Ready To Run Sale, Bentayga races in the ownership of Nancy Wong’s Thoroughbred Trader Ltd group, who also have another promising three-year-old in Dawn Parade in Pike’s Cambridge stable.

“He is built in the same mould as Dawn Parade, who races in similar ownership,” Williams said. “They’ve both taken a while to work the game out, but they are big, physical types who look like they will go on with it. “He (Bentayga) was expected to win at Tauranga, but Michael was kicking himself as he didn’t hear the starter and they missed away.

“He probably couldn’t have done any more that day and we hoped today he could freewheel a little, as he has a big bold action and he had them in trouble a fair way out. “It wouldn’t surprise us if he went over more ground when he learns to relax a little more. “He’s not nominated for a race like the New Zealand Derby (Group 1, 2400m) but there have been some discussions about working towards that type of race, whether it be here or later on in Australia.”

Williams also reported the stable were delighted with the run of Tavistock three-year-old The Irishman who finished off nicely for second behind Brando in Saturday’s Listed Uncle Remus Stakes (1400m) at Ellerslie. “We were rapt with The Irishman and couldn’t have been happier with him,” he said.

“He still has a lot of improvement in him fitness wise as he didn’t get much of a hit-out at the Te Aroha trials due to the very firm track. “He just got a little too far back yesterday and instead of being with Brando during the run he was a few spots further back.

“We’re not saying he would have beaten him, but I do think he would have got a lot closer at the finish. “We’re looking forward to getting to a mile with him and being by Tavistock out of a Zabeel mare, then the Derby trip might not be out of the question.”