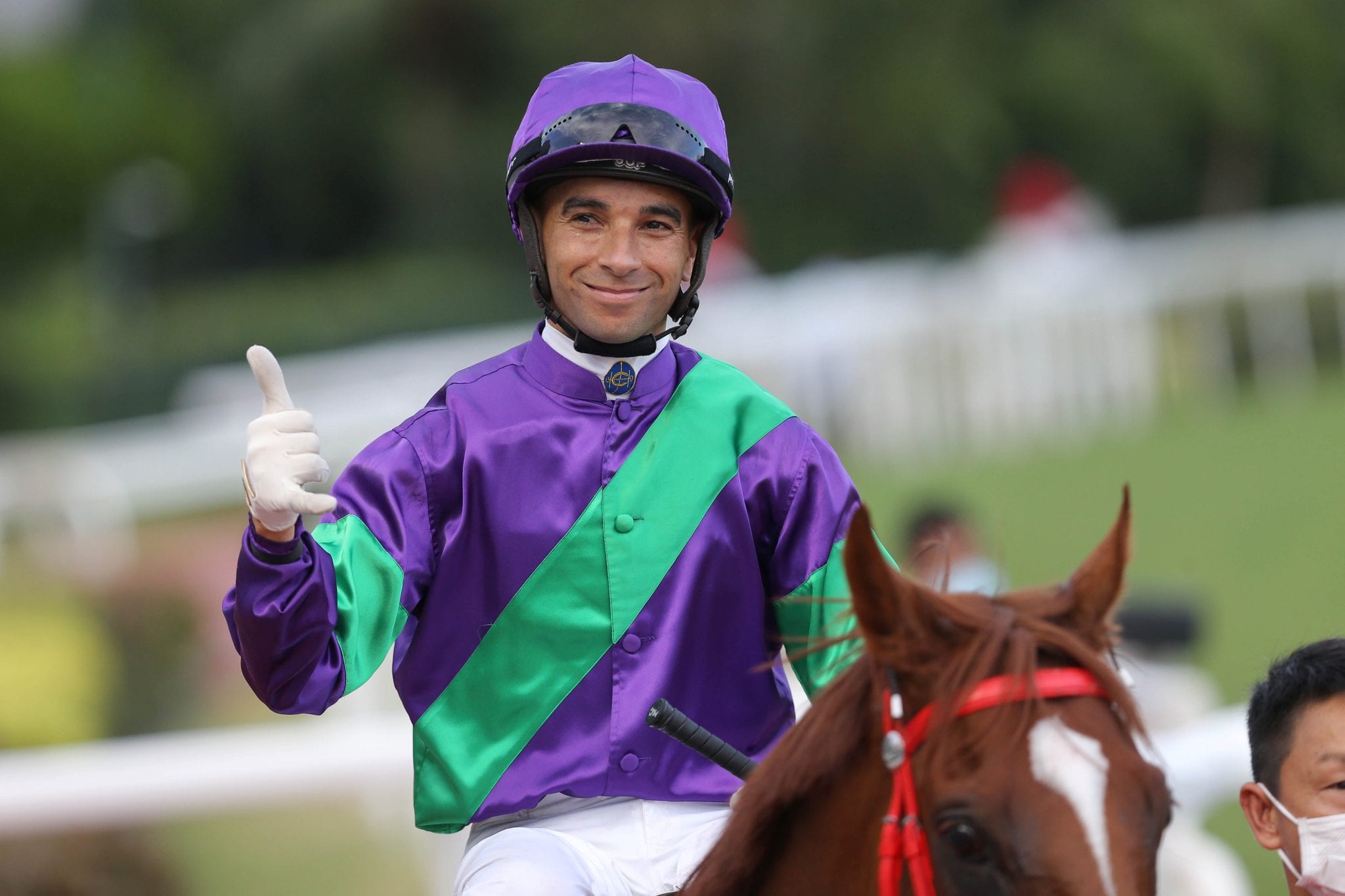 Joao Moreira’s brilliant best was on show yesterday (20 September) at Sha Tin as he collected a superb six-timer which he capped with victory aboard the impressive Excellent Proposal. “I just hope that I can keep it up – it’s not going to be an easy season,” Moreira said.

Fresh off a Wednesday treble, Moreira brought his dazzling midweek form to Sha Tin but he took it up a few notches, three to be exact as he won six out of the ten races on Sunday’s card.

Despite leading the premiership table by six (with 14 wins), the ‘Magic Man’ was quick to quash any title talks, though, he does have one target in mind: December’s Hong Kong International Races.

“It’s just the beginning of the season, we have so much to look forward to and I don’t want to put the premiership in my mind – I want to concentrate on these good horses and hopefully I am on board some nice ones when we get closer to December,” Moreira said.

Now in his eighth season, Moreira has excelled with 959 Hong Kong wins to his name and is fourth on the all-time list. His 152 winners this season and last includes 15 trebles, three four-timers, three five-timers and one six-timer – which he took yesterday.

His headline-making exploits on the track have also seen him bag an extraordinary eight wins in a day – a Hong Kong record – at Sha Tin on 5 March, 2017. He’s also ridden eight at single meetings in Singapore and his native Brazil.

Sunday the 36-year-old sealed his superb six aboard the John Size-trained Excellent Proposal in the Class 2 Cheung Shan Handicap (1600m) and the four-year-old did so in style, issuing a warning to those on a Four-Year-Old Classic Series trail. “Only good horses can do what he’s just done, to come from the widest gate and get stuck four-wide and still make it in good fashion,” Moreira said.

The Exceed And Excel four-year-old was caught wide throughout after breaking from gate 14 but Moreira didn’t panic, and the rising star responded to his urgings in the straight, coasting to a comfortable one-and-a-half lengths victory.

While Excellent Proposal took the day’s feature, it was in race six when Moreira turned miracle worker, taking section one of the Class 4 Shek Lei Handicap (1200m) from an improbable position aboard Scores Of Fun, who was badly strung up in the straight.

“I was hopeful I would get through – he’s a promising horse,” Moreira said. “We got held up in the home straight and I had to go for two gaps and the only one that came through was the second one and that proves that he has got heart – he came in between horses and got the job done.”

The John Size-trainee settled midfield on the rail and in the home straight had to duck and weave for an opening, which Moreira found at the 200 metre mark between a weakening Inno Legend and Happily Friends. “It’s a great training achievement, no doubt that the time off that John (Size) gave him he needed and it paid off today,” Moreira said.

The Australian-bred PPG (Privately Purchased Griffin) extended his unbeaten record to two after his debut win at the tail-end of last season and was the first of a double on the card for 11-time champion trainer John Size.

His fourth for the day came aboard the Frankie Lor-trained Armor Star in the Class 4 Shek Wai Kok Handicap (1400m), the first of a double for his trainer. “I thought today that no one could lead and win, the race lacked speed and I spoke to Joao (Moreira) and we discussed that if no one would lead, we would,” Lor said.

Moreira also ensured Caspar Fownes’ fast-start to the new season continued with victory aboard The Rock in the Class 3 Kwai Shing Handicap (1400m).

The Lor-trained Winning Dreamer went to Sha Tin with a perfect record and he departed in the same manner, bringing up a hat-trick in the Class 3 Kwai Fong Handicap (1200m).

Having drawn gate 12, the Deep Field youngster was up against it but a smart, positive ride from Vincent Ho got the New Zealand-bred across the field and from there he dug deep to nail a tough half-length score.

“Before the race I was a little bit scared, especially having drawn gate 12 for such a young horse,” Lor said of the horse eligible for this season’s Four-Year-Old Classic Series, should his trainer opt to direct him there. “1400 metres should be no problem, but 1600 metres, well, we need to find out later,” Lor said.

“He can relax, even in front, there were horses next to me and he still settled very well, he’s actually a lot more relaxed at the races than at trackwork, he’s quite nervous in the mornings,” Ho said. “He gave me a nice sprint and stayed on well in the finish,” Ho said.

Callan gets on the board, Yiu takes two

Irishman Neil Callan secured his first win for season 2020/21 aboard the Ricky Yiu-trained Excellent Chariot in the second section of the Class 4 Shek Lei Handicap (1200m) which gave the reigning champion handler a double.

The Jimmy Choux gelding broke cleanly to settle midfield before pouncing to the front at the 200m mark for a one-and-a-quarter length win. “I think he looked like a versatile type when he was trialling last season, so I asked Ricky (Yiu) if I could I get on him this year and he stayed true to his word and let me do a little bit of work on him early.

“His trial was very good behind Thanks Forever and Ka Ying Star and I knew that in the trial he gave me a nice comfortable feel, so I went in today very confident that he could win and I think he should be able to go on an upward curve,” Callan said.

Today’s win was Callan’s 256th in Hong Kong and he suggested the four-year-old New Zealand-bred has a bright future ahead.

Trainer Chris So’s solid start to the season continued as Tianchi Monster took the Lai King Handicap (1600m) under Vagner Borges. “He ran well at his first run last year – he was only beaten by a little bit in Class 2 but now he’s in Class 3 and even his first-up run was very good – the small field helped a lot today,” So said.

Dylan Mo and Michael Chang bagged their first season wins after Charitydream made all in the Class 5 Tai Wo Hau Handicap (1650m, dirt).