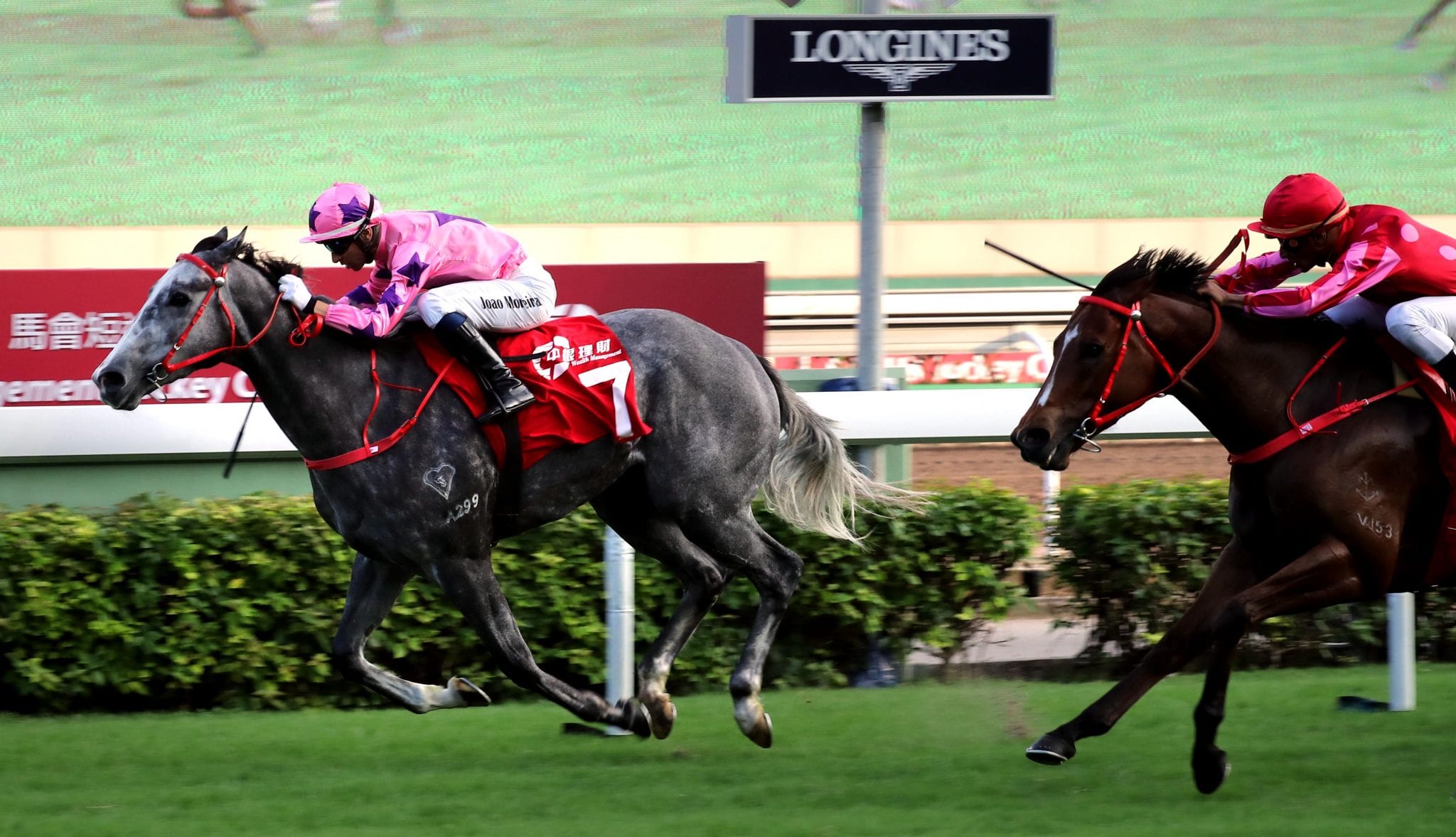 Hot King Prawn’s grey coat is another shade closer to white, one more year is on his withers, but trainer John Size is not yet letting go his belief that yesteryear’s precocious star-in-waiting might yet snare that Group 1 win that has so far eluded.

“It might be a bit optimistic to think he can come back as a six-year-old and go one better but he might be able to: all his training and his signs at home for us at the stable are quite good,” Size said this morning (Friday, 20 November).

Hot King Prawn rolled into the LONGINES Hong Kong Sprint two years ago as the 2.1 favourite with a record of nine wins from 10 starts, and off a no-messing front-running success in the Jockey Club Sprint which suggested the dappled galloper was the future of the Hong Kong sprint division.

But on the big day, he faded to ninth. Two months later, in February 2019, Hot King Prawn underwent surgery for colic and wasn’t back in action until last season’s Jockey Club Sprint in which he again showed his quality with an admirable first-up second behind the dashing ‘rising star’ of the moment, Aethero. Size’s charge followed that with a tantalising neck second to stablemate Beat The Clock in the LONGINES Hong Kong Sprint itself.

“Last season he had a colic operation to come back from and I think he did a very good job to sort of run so well in the International race second-up after a long lay-off. This season I’m hoping he’s a little bit better,” Size said.

Just a smidgeon better would place Hot King Prawn at the head of a sprint pack lacking a star, with Beat The Clock and Mr Stunning now retired and the usual raft of exciting young guns still on the rise through the handicap grades. The Australian-bred won only one of eight starts last term but he was never worse than fourth and made the podium in three of the four Group 1 races he contested.

Since a pipe-opening fourth at his first start this term, under top-weight in the Group 2 Premier Bowl Handicap (1200m), Hot King Prawn has pleased his handler, notably his showings in a couple of barrier trials the most recent of which saw him cruise first past the post under big-race pilot Joao Moreira.

“He seems fine, he took the (first-up) run very well, he had a couple of easy trials after that so he seems in pretty good shape and I’m happy with him,” Size said. “He’s coping very well with his training and he might be limited as to what he can do in Group races but he’s certainly going to run well.”

Dreamer could be the future

The future of the sprint division could be on show later on Sunday’s card when the unbeaten Winning Dreamer will attempt to continue his unblemished ascent in a hot Class 2 contest, the Penfold Park Handicap (1200m).

Trainer Frankie Lor famously enjoyed Group 1 LONGINES Hong Kong Sprint success with Mr Stunning, one year after the gelding had lifted the same prize for the handler’s former boss Size, and he – like many around the Hong Kong circuit – is looking at Winning Dreamer as one with the potential to be mixing it in that lofty grade in the future.

Lor – who saddles Big Party and Fat Turtle in the Group 2 Jockey Club Sprint – has nurtured Winning Dreamer to four wins since the gelding’s career debut at the end of May and the four-year-old has two wins at the course and distance already on the board this term.

“He’s in good form,” Lor said. “I trialled him again and he went well, he has a good draw (gate one) so I hope he can do it. You’ll see he might be better than last time, he’s a bit lighter, but we need to see how he’s going. I just hope he can keep progressing and we’ll see on Sunday how good he is.

“He looks like he should be a Group horse but how good, we don’t know yet.”