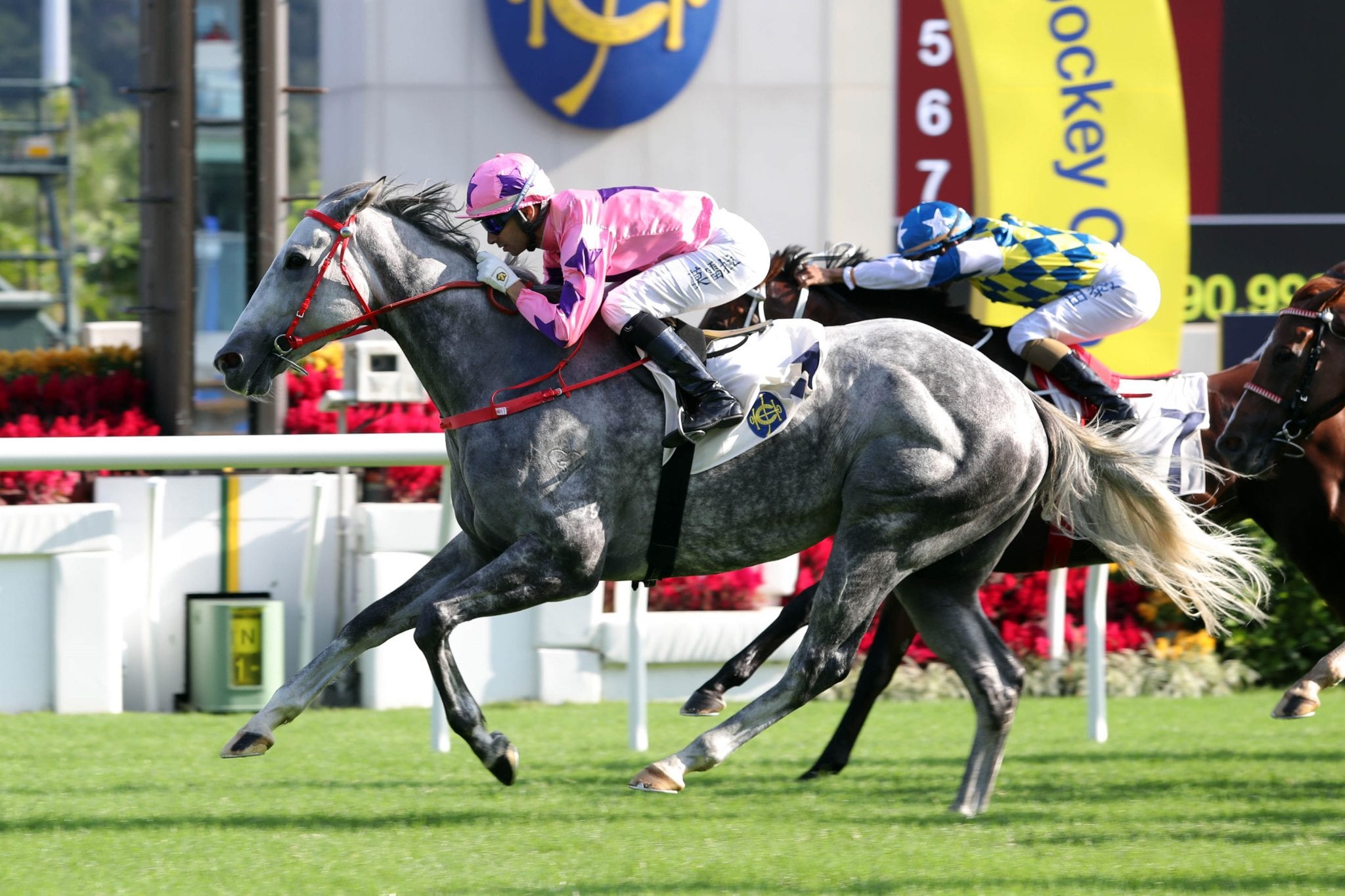 The eye-catching grey was three quarters of a length too good for his opponents but scored with more mastery than that margin might suggest, leaving jockey Joao Moreira and trainer John Size satisfied that the six-year-old is in form good enough perhaps to snare a long-awaited first career Group 1.

“He’s won with authority – not to disrespect the other horses in the race because some of those might improve as well but I just couldn’t be any happier with him. He’s going to December as an improving horse; he’s a class horse, a quality horse, and we can go there with plenty of confidence – there’s no doubt that that’s the race we want to win,” the Brazilian said after Hot King Prawn held off Computer Patch and the late-charging Rattan.

Moreira and his mount have been in this position before. Two years ago, the pair sealed this race with a strong front-running display before the same approach resulted in a fading-out ninth in the LONGINES Hong Kong Sprint when favourite.

But nowadays the Size trainee has less of the precocious spark about him and a cool maturity was evident in the gelding’s manners when Moreira was faced with a four-way battle for the lead: the rider eased back to the second rank, and, when forced to accept a position three-wide, his mount, powder-pale face to the breeze, settled into a purring rhythm.

“I wasn’t worried because I knew I was going into the race with a fit horse,” Moreira said. “He’s got a little bit more mature and he hasn’t been showing as much speed as early on in his career, but I just can’t see that as a bad thing because all we want is to have a strong horse at the finish and he’s proven to be that kind of horse today. He’s one of a kind.”

Hot King Prawn was the second home in a Size-trained one-two in the LONGINES Hong Kong Sprint last term, with the now-retired champion sprinter Beat The Clock edging the win. The 11-time champion trainer expects to see further improvement when his current number one lines up for his third start of the campaign in next month’s big race.

“I thought the run was okay, he’s covered a little bit of ground and finished the race off quite nicely, I wouldn’t expect any more. I think probably he’s still improving and he’ll be a bit better on international day,” he said.

“He’s six years old this season but sometimes our good horses can be that age and still do their best. Hong Kong is a place where mature horses can have an advantage sometimes. He had one start before the Hong Kong Sprint last season because he was coming back off a colic operation, so he was a little bit disadvantaged, so this time he’s probably had a more comfortable preparation.”

Despite this 11th success of his 21-race career, there is no guarantee that the victorious 3.9 second-favourite will line-up as Hong Kong’s prime contender in the Hong Kong Sprint, with the newly-imported The Everest winner Classique Legend – trained by Caspar Fownes – being forwarded as the division’s latest pin-up. Size, though, is not concerned.

“It’s difficult to assess (Classique Legend) from here, we’ll have to see him race in Hong Kong and we’ll probably get a better guide then,” he said sagely.

Size also gave an update on last season’s Group 1 Stewards’ Cup winner Waikuku who will step out for the first time this term in the Group 1 LONGINES Hong Kong Mile against a field likely to include impressive Group 2 Jockey Club Mile winner Golden Sixty.

“Waikuku has been doing okay. He’s behind schedule obviously but he’ll have another trial and all being well he’ll go into the race first-up,” Size said.

Moreira earned a big-race double when guiding the Tony Cruz-trained Furore to success in the third of the afternoon’s Group 2 features, the Jockey Club Cup (2000m), three-quarters of a length ahead of stablemate and Horse of the Year Exultant.

The future of the Hong Kong sprint division is looking dreamy after Winning Dreamer (122lb) smoked his rivals in the Class 2 Penfold Park Handicap (1200m) to maintain an unblemished ascent through the handicap grades.

Frankie Lor’s rising star made it five wins from five starts in posting an impressive length and a half margin over the talented Duke Wai (129lb) and Beauty Applause (122lb). Jockey Vincent Ho – successful earlier on Golden Sixty – was pleased with what he viewed as another step in the exciting four-year-old’s education.

“The handicap conditions made it easier for him, he was helped with gate one, too, and he’s still a young horse so this race has helped him – his first in Class 2 – he just needs time to improve,” Ho said.

“He’s still a bit hot but he settled a bit more today: he’s still got plenty to learn but I’m happy with him. Once he picked up, he let down so well and he stayed on really strongly to the line. When they accelerated, it was different for him because the pacing is different in Class 2 than what he’s been used to so far but he did it nicely.”

Lor did not rule out a tilt at the four-year-old-only Hong Kong Classic Mile in January, but acknowledged that such a test may come too soon and would be stretching the Deep Field gelding’s stamina to the limit.

“He keeps improving so I’m happy. In the straight, usually he can come past the horses quickly but because it’s Class 2 now he needed time to pass the front runners. We need to look at the programme and see if we stick to 1200 or go to 1400 metres. It’s exciting,” he said.