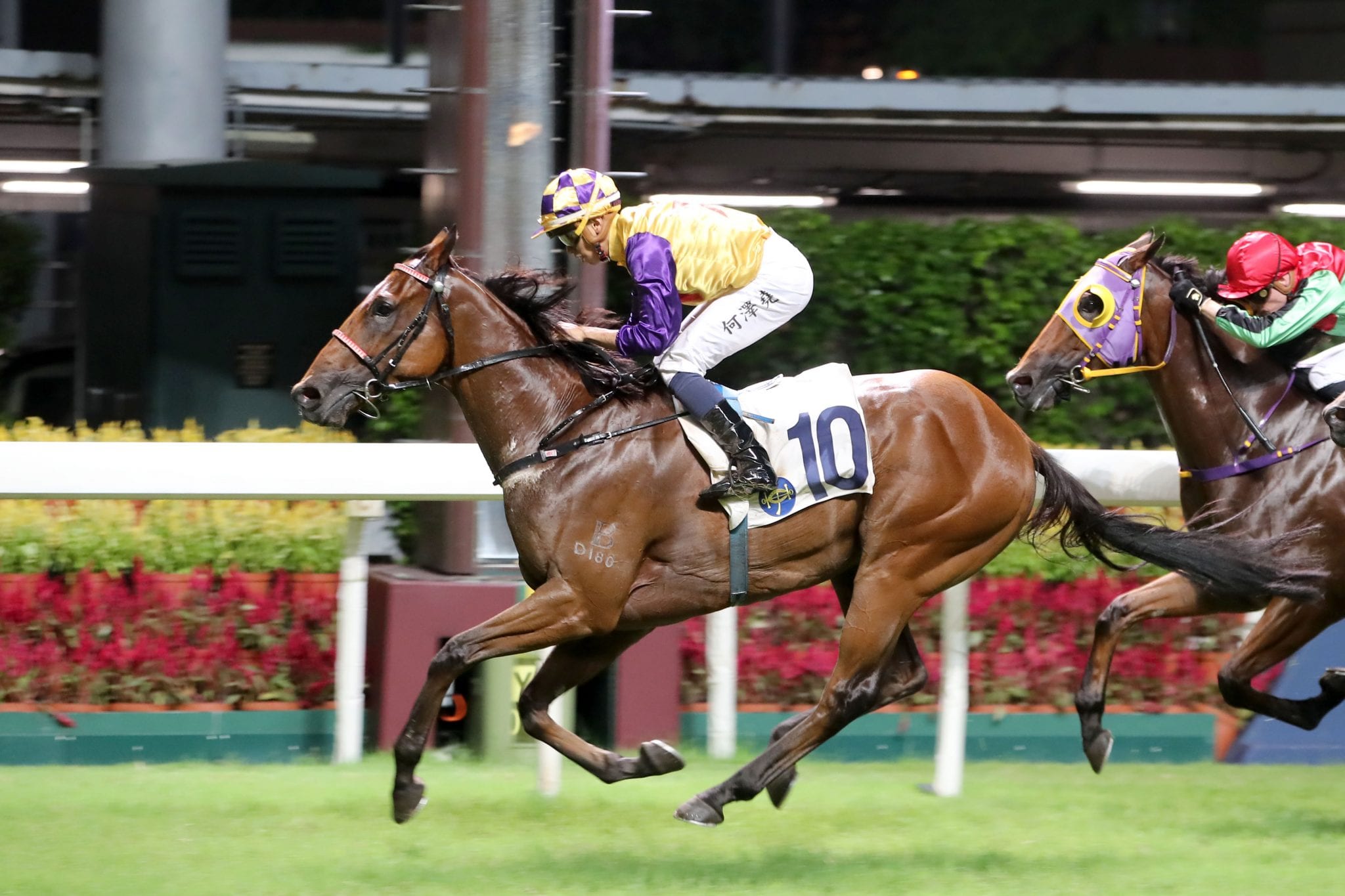 Vincent Ho is hopeful that improving youngster Eternal Harvest can put a barrier mishap behind him and continue his ascent up the handicap when he tackles a competitive field in the Class 3 Cha Kwo Ling Handicap (1000m) at Happy Valley on Wednesday (16 September).

The Ricky Yiu-trained four-year-old reared in the gates at his last start, back in July, and was scratched from the race. But, prior to that, the rising talent had climbed 15 points in the ratings with two wins from five starts. “He’s a little bit tricky in the gates,” Ho said. “Last race of the season he went in a little bit too early and he just got impatient and started to rear up, and when he did that, we both hit our heads, so we had to scratch.”

The four-year-old’s final completed run of last term was an impressive one, as he defeated a classy field over the course and distance: his rivals that time included Metro Warrior and Flying Genius (121lb), he faces the latter again and boasts two wins over 1000m at the city circuit.

“Eternal Harvest trialled well and behaved well in the gates, so he should be fine and he’ll be a bit stronger this time around; he’s still quite immature but you can see his ability already. I liked the way he trialled – he finished off well,” Ho said.

Eternal Harvest (120lb) faces 10 opponents including Loving A Boom (133lb), Green Aeon (130lb), Heart Conquered (121lb), Nextmodel (115lb) and Saul’s Special (133lb). The last-named drops into Class 3 for the first time since his last win, in June 2019, which was also the last time Zac Purton paired with the ex-Australian galloper.

“It’s a suitable class for him – he’s got a reasonably good gate and I thought his trial was decent, so he should be a chance,” Purton said.

The Michael Chang-trained galloper lines up in search of his fifth Hong Kong win. “He’s had a good preparation and he’s working well, so I expect he run well,” Chang said. “His trial was good, the horse is fresh – he loves the track and we’ve got the best jockey on, so there’s no excuse.”

Ho has two wins so far this term and heads to Happy Valley as one of four jockeys with a full book of eight rides, including the Frankie Lor-trained The Runner in the Class 3 Hang Hau Handicap (1200m).

The five-year-old was an off-season acquisition for Lor, transferring from the Douglas Whyte yard where he was a two-time winner, including at his final run for the South African handler. “He worked well, I think he should be alright in Class 3 with the light weight,” Ho said.

Lor heads to the Valley with five entrants in search of his first win for the 2020/21 season, including Heavenly Thought who returns to his happy hunting ground at the Valley in the Class 3 Lei Yue Mun Handicap (1650m).

The gelding bids for his second course and distance success in Wednesday’s contest and does so with Joao Moreira in the plate. “His morning trackwork is good and his trial was good; Joao (Moreira) rides him very well and that’s why I asked him to ride and after the trial he said the horse is in good form,” Lor said.

The six-year-old arrived in Hong Kong as a three-time winner in Australia pre-import, his biggest success so far being the Group 3 Grand Prix Stakes (2200m) at Doomben. He followed that score with a close-up second in the Group 1 Queensland Derby (2200m), behind fellow Hong Kong-based horse and former stablemate, Dark Dream. In the latter race, he beat Group 1 winner Youngstar, who claimed the Queensland Oaks (2200m) in May 2018.

Lor though, suggested that after arriving on a Class 2 mark of 88, the gelding would be unable to scale those heights again as a 69-rater in Class 3. “I think Class 3 is his maximum, he was quite consistent last season, so I hope he can still run a good race,” the handler said.

The So You Think gelding will break from gate seven among the field of 10.

Frankie Lor’s exciting sprinter Winning Dreamer returns this Sunday (20 September) at Sha Tin as one of 12 entries in Sunday’s Class 3 sprint over 1200m.

The exciting sprinter is unbeaten across two outings and has copped a 20-point ratings rise since his debut win but will go around a bend for the first time. “He will race this Sunday at Sha Tin, Class 3 over 1200 metres,” Lor said.

The exciting sprinter crossed the line second in a recent trial over 1050m on the dirt at Sha Tin with last season’s Tony Cruz Award winner Vincent Ho in the plate.

“He looks better than last season, last season he was still a baby and he had a bit of baby fat. This season he looks like he’s dropped some weight but for me he still looks ok,” Lor said.