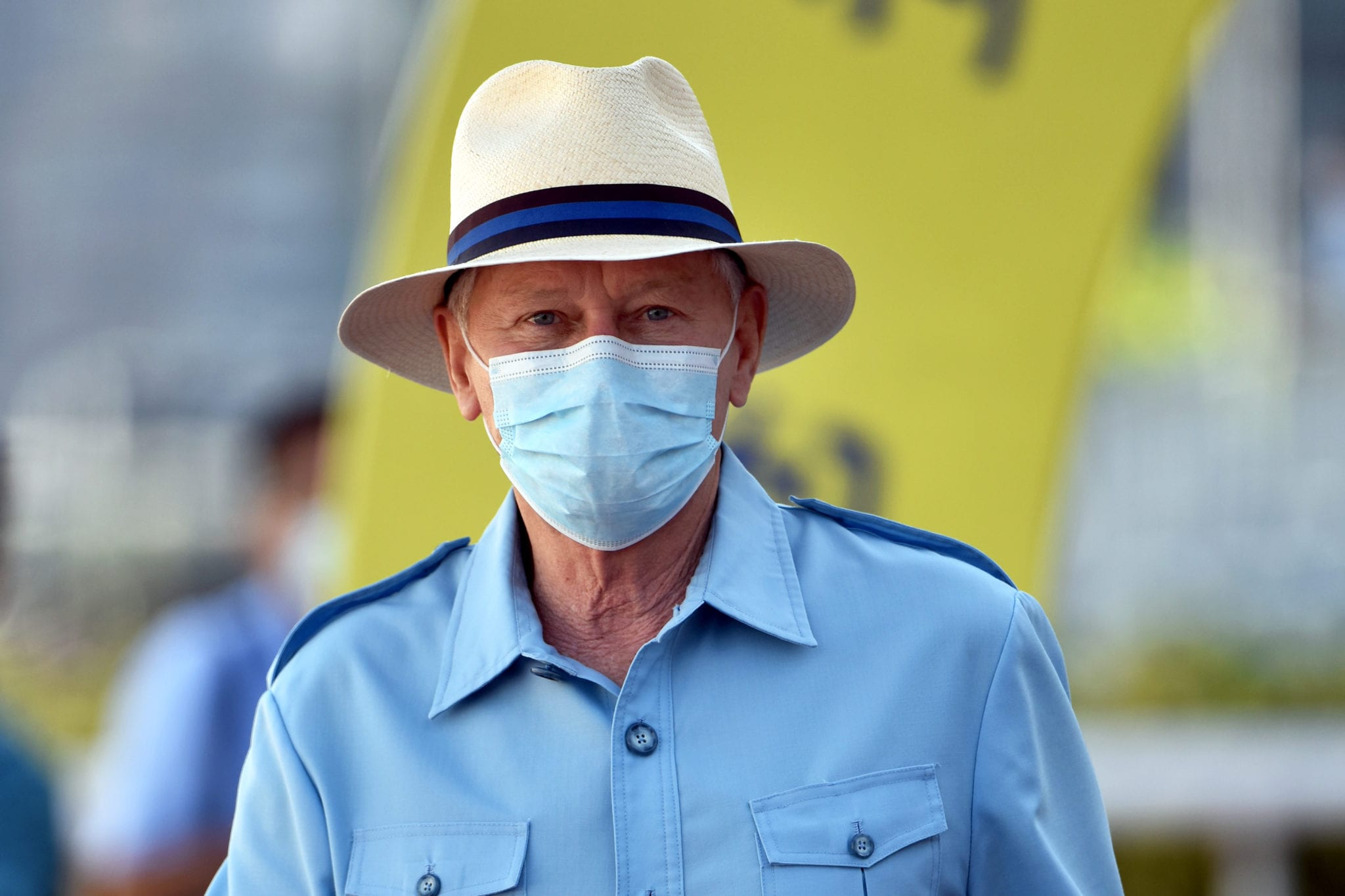 John Moore’s five-decade career in Hong Kong will come to an end in 10 days’ time but the handler hammered home a hat-trick of wins at Sha Tin on Sunday (5 July) to show that he’s not winding down just yet.

Sunny Boy set the ball rolling with an all-the-way win under Zac Purton; So We Joy easily broke his maiden for Joao Moreira; and Purton delivered Awe with a sweetly-timed run to complete a race-to-race-to-race three-timer for Hong Kong’s most successful trainer of all time.

“I’m really pleased with that – three winners,” Moore said after taking his tally to 56 for the term. “We had a target of 50 to 55 winners and we’ve surpassed that so it’s been a really good season after what we did with 75 winners last season.”

Moore, 70, will depart for Sydney and a training partnership with his brother Gary Moore at Rosehill, having reached the Hong Kong Jockey Club’s compulsory retirement age.

“It’s got to be emotional because I’ve spent so much of my life in Hong Kong, but my wife is Chinese, our home is here, and while we’ll be in Australia for a lot of the time, I’ll be back here very often. I think I’ll keep my Diamond Membership with Cathay!” he said.

Awe’s success in the Class 3 Tolo Harbour Handicap (1400m) wrapped up trios for Moore and jockeys’ championship leader Purton, who galvanized the British import through a late surge.

“It looked at the 200 (metres) that he was going to go up and down in the one spot but when Zac got into him he changed gears and hit the line very nicely. He’s a horse with a future now, ridden that way, and I hear he’s going to David Hayes so he’s got a nice horse there,” Moore said.

Purton made all of the running to kick off Moore’s three aboard top-weight Sunny Boy in section two of the Class 3 Victoria Harbour Handicap (1200m, dirt). The gelding sports the well-known blue-quartered silks of long-time Moore patron Matthew Wong.

“Mr. Wong, he’s been with me since 1985 so they’re lost souls with respect to where to put their horses now, because they’ve always been with me, but I said to them they’ll just have to learn to work with other trainers – split them and see where you get the results,” Moore said.

The handler turned to Joao Moreira to guide So We Joy to an easy maiden-breaking success in the Class 4 Mirs Bay handicap (1600m). The Brazilian had kicked off the afternoon’s action with victory in the opener on the whitening three-year-old grey Chancheng Prince.

Purton’s earlier triumph in the Class 4 Port Shelter Handicap (1400m), on the Jimmy Ting-trained Perfect Pair, meant he came out of the 11-race card with a six-win advantage over Moreira, with the tallies running 141 to 135.

But perhaps not. Moreira’s already crumbling title hopes disintegrated to dust when the stewards handed out a suspension that benches him for the season finale on Wednesday, 15 July; the three-time champ was already suspended for this Wednesday (8 July) night’s meeting, leaving him with only one race meeting to try and pull back six wins on Purton, who will ride all of the remaining three fixtures.

Yiu and Lui in yo-yo tussle

Moore is a seven-time champion trainer in Hong Kong but sits eight wins behind the current premiership leader Ricky Yiu, who pulled a win out of the fire to end the day one ahead of Francis Lui.

With three meetings to go, Moore played down his own chances of a late challenge, seeing the title as a three-way fight between that pair and Tony Cruz.

“It’s great for racing that it’s not only monopolised by two trainers,” Moore said. “With Ricky Yiu and Francis Lui, and Tony (Cruz) right up there, it’s just good for Hong Kong racing that a Chinese trainer, like Dennis Yip did years ago, can come out and win a premiership. It’s very important for racing here.”

Lui struck early with Chancheng Prince’s success in the Castle Peak Bay Plate (1200m) for Griffins and that edged him to the top of the table by virtue of a better second-place tally over Yiu – 45 to 39.

But Yiu was not done. Shining Gem lifted late to take the finale, the Class 2 Yan Chau Tong Handicap (1200m), under Derek Leung.

“It’s going to be very exciting and a close finish!” Yiu said, and with only three race meetings to go, the pressure is increasing, particularly as third-placed pursuer Cruz is still within striking range after nailing his 60th win of the term.

Leung bagged a double, having helped Peter Ho close in on the Hong Kong Jockey Club’s required season’s benchmark for trainers of 16 wins or at least 14 wins plus HK$21 million in prize money. The handler moved to 15 wins and HK$20.2 million thanks to Hay Run’s success in the Class 5 Kat O Hoi Handicap (2200m).

Chad Schofield had a willing partner in the gutsy Utopia Life (131lb), trained by Manfred Man, who dug deep to repel late challengers Enshrined (118lb) and Sky Show (116lb) at the end of the Class 3 Victoria Harbour Handicap (1200m, dirt).

Joyful Fortune was the talk of the track with a debut win that fulfilled the expectations of not only trainer David Hall and jockey Blake Shinn, but also those who ensured he started a -125 favourite.

The Australian-bred lined up having shown enough in his morning work and barrier trials to ensure the word on his potential was more a bellow than a whisper.

“You can see it all in the mornings but you need to see it on race day,” Hall said after the three-year-old sauntered to a four and three quarter-length success, and a Class 4 record time for Sha Tin’s 1000m, in the Tathong Channel Handicap.

Only the high-class Aethero has gone faster down the big track’s straight this season, and that was when the Group 1-placed speedster clocked an outright track record of 54.69s. Joyful Fortune’s 55.07s is the third fastest 1000m time in the past 13 seasons.

“He’s given all the indications that he was going to go and do something like that,” the handler continued. “Maybe that bit of a tailwind made the time look more impressive but he’s a talented horse, there’s no question. From day one he’s looked like that, he’s got a beautiful action.

“We’ve concentrated on keeping his demeanour quiet and relaxed and that’s been working really well. His brain has been terrific for Hong Kong, he’s a perfect horse, he’s very well-behaved and a good doer in the stable – he’s only three so in six months he’ll be a stronger horse.”

Blake Shinn enjoyed a breezy ride on the impressive Nicconi chestnut who led the field and drew clear without much effort, defeating Fabulous Eight (122lb), who in May filled the same position behind another of the season’s highly-regarded young guns, Winning Dreamer.

Shinn, with only 12 previous wins on the board this term, had partnered Joyful Fortune in three barrier trials and the majority of his recent track work.

“Blake got excited about him and wanted to ride him every morning and put plenty of work in on him, so it’s good to see it all come together. Everyone likes to be on a good horse but Blake needed a bit of a kick so it’ll give him a lot of confidence, I think,” Hall said.

“He had a couple of trials and I think everyone thought I was ready to run him, but then I trialled him around the bend and I did that for the education, just to finish the job. I was always going to run down the straight first time but at least he’s had the experience of running around the corner. I think he can run 1200 metres, no problem – it’s pretty exciting.”

Hall, who earned a Group 1 Melbourne Cup win with Makybe Diva and saddled Absolute Champion to Group 1 Hong Kong Sprint success, can now take the summer to plan a campaign. But when next season comes around, he will not be rushing his exciting charge to the higher grades.

“We’ll just progress in the new season,” he said. “He won’t be thrown in the deep-end or anything, he’ll progress and when he tells us he’s ready for the big time, we’ll all know.”

Joyful Fortune was a AU$100,000 purchase out of the 2018 Inglis Classic Yearling Sale, and was first home in two trials before his export to Hong Kong.

Hall bagged a race-to-race double when Matthew Poon made all on Eight Trigrams to win the Class 4 Rambler Channel Handicap (1200m, dirt).