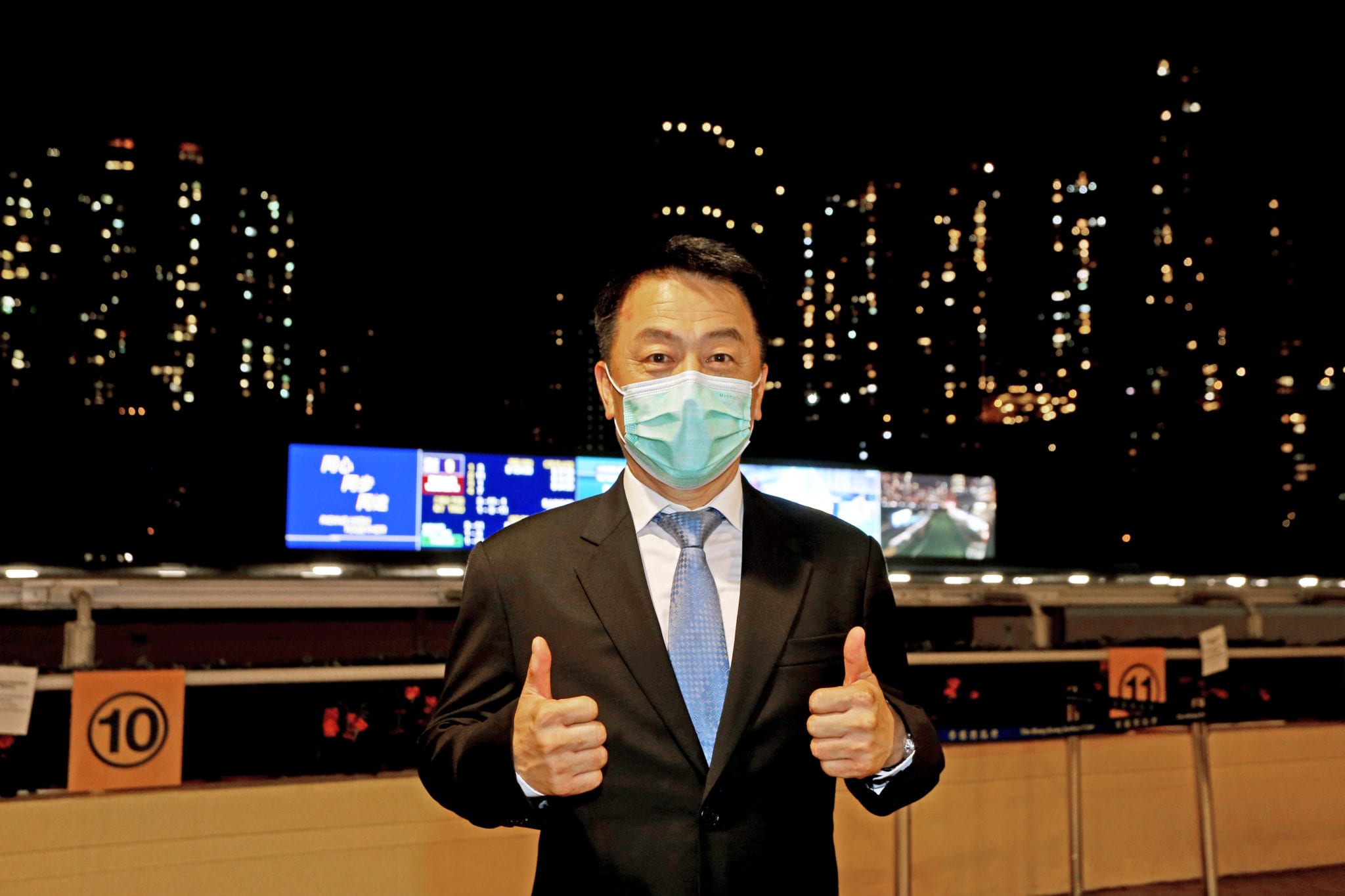 Ricky Yiu sealed the champion trainer title at Happy Valley on Wednesday (15 July) night to fulfill a lifelong dream, and he did it with a smile and a shrug.

With Hong Kong in the midst of a coronavirus ‘third wave’, the famous Valley crowd was not there to cheer his remarkable feat, and there was no presentation to mark his victory. Yiu was fine with that.

“I’ve really achieved my goal, this is the peak of my career, but a lot of people are more excited than I am; the owners on WhatsApp were messaging me ‘Add oil’! The staff are very happy – I’m happy too, but I don’t have this excitement,” the first-time champion said.

“I’ve been in horseracing all my life – winning, losing, it happens every meeting so I take it very easily. Even when Sacred Kingdom won the Hong Kong Sprint, I kept quiet, I don’t know why, it’s just me.”

Despite his coolness, the sense of the achievement was not lost on the handler, whose career goes back to 1972 when he joined the first intake at the apprentice jockeys’ school; a career that has brought Group 1 successes with the world champion sprinter Sacred Kingdom, with Amber Sky in Dubai and Ultra Fantasy in Japan.

But at the start of this term, no one expected to be calling Yiu champion trainer. Despite his track record as an astute horseman, he is perennially mid-rank, and he entered this term off the back of a steady 29-win campaign.

“It wasn’t really expected,” he said. “I knew my horses would do well from the start of this season but it was only about two and a half or three months ago that I thought I had a chance. From then on I thought, ‘I’ll work on this’ but before that, no.

“I just put my head down, kept working and kept focusing. When I saw they weren’t catching up, it’s a once in a lifetime chance, so I went for it. I always look forward but I did look over my shoulder and there was Francis (Lui) and Tony (Cruz), these two trainers were catching me up.”

Lui and Cruz were breathing down his neck into last Sunday’s Sha Tin fixture. Cruz nailed a double but Yiu delivered a bazooka of a treble to arrive at the downtown finale with a four-win cushion, his tally running at 67 – including six trebles and 10 doubles – to his rivals’ 63.

“I was four in front, so this last meeting at the Valley, to win three or four would be a miracle – it’s a big ask. When I won the last race at Sha Tin, I knew the chance was mine,” Yiu said.

Cruz had only four runners on the card: the first, Power King, hit the mark to narrow the gap to three; but when his California Rad placed second to the Douglas Whyte-trained The Runner in the sixth of the night’s nine contests, and with Lui winless, the championship was Yiu’s even without him adding to his haul.

The last time a homegrown hero won the title, flags waved and the locals stayed well after the last to cheer – that was in 2013, when Dennis Yip defied expectations to nail the championship in the season’s very last race.

This time, Yiu was ushered out for a socially-distanced salute to photographers before going about the business he knows best, saddling horses to race.

“It’s very strange, it’s never happened before like this, it’s totally different, but I don’t mind,” he shrugged again, content in the knowledge that this season he is champion, his name will be written in the record books, crowd or no crowd.

And, even though the stands were empty, the turnover for the night was an all-time record for a Happy Valley fixture at HK$1.6 billion.

Cruz in the money

Tony Cruz put up a good fight with his late-season rally but was unable to reel in Yiu, despite outpointing the new champ two to zero this evening. The two-time past champion was not complaining though, with his stable runners having notched 65 wins and banked more than HK$127 million in prize money.

“I’m very happy,” he said. “I’m leading prize money trainer this season, I’ve won big races and Exultant could be Horse of the Year, what else could I ask for? I’m pleased with what we’ve achieved.”

Cruz struck early, with the first of his four runners, Power King, in the Class 4 Tsap Tseung Handicap (1200m). The four-year-old Hong Kong International Sale graduate earned his breakthrough win with a rattling run under Vincent Ho – Cruz’s subsequent nemesis atop The Runner – to overhaul race favourite Sell My Sole by a neck.

“He’s just a Class 3 horse and he was pretty fit the last time I ran him at 1400 metres, I thought he’d get that distance, but he’s actually only a 1200-metre horse as he’s shown tonight,” the handler said.

Cruz sealed a double when Waldorf jetted through runners from deep to nab the season’s last race, the Class 2 Cheong Ming Handicap (1200m) by a neck under Karis Teetan.

Ho, meanwhile, took his tally to 67 wins and is this season’s Tony Cruz Award winner as the leading homegrown rider.

Purton looking forward to a rest

Zac Purton is looking forward to kicking back and relaxing with a refreshing beverage now that his “hardest-fought” season is over. The now four-time Hong Kong champion’s first win this term came atop Good Runners Way, at the season opener on 1 September, and he rounded out the campaign with a double to take his final tally to an impressive 147.

Kinda Cool wrapped things up; the Frankie Lor-trained three-year-old hung on for Purton to pass the post half a length to the good in section two of the Class 4 Tsap Tseung Handicap (1200m).

“He’s always shown he’s got a little bit of ability, he just hasn’t quite been able to put it together. The long straight at Sha Tin’s been testing him and you could see here even with the short straight he was starting to flounder the last bit – he needs to strengthen up,” Purton said.

Lor made it two wins on the card when Teetan drove Solar Wai Wai home in the Class 2 Hawthorn Handicap (1650m). The jockey’s two wins on the night gave him 93 wins for the season.

David Hall has his string in fine end-of-term fettle, with seven wins in July after a dry June. And he followed up a brace at Sha Tin on Sunday with another double tonight.

“Lucky Missile is still a three-year-old, he’s still sort of learning his way and getting his confidence so I think he can progress and get a couple of more wins,” Hall said. “The side-winkers made a bit of a difference tonight, we were going to go with the blinkers but he worked a bit too fiercely in them so we backed off, went halfway with the cheek-pieces, and it did the job.

“Oversubscribed has been tough, everyone’s seen him throughout the season and he’s had a lot of racing; he probably wasn’t at his best tonight, but he ticked all the boxes with the jockey and the barrier (two) and the right distance for him, and he got the job done. He still hasn’t learned to relax well enough to get the best out of himself yet, so when that comes together I think he’s also a horse that has probably got another win in him in Class 4.”

Peter Ho made the trainers’ minimum benchmark by the skin of his teeth, or HK$136,215 to be exact. The criteria demands that a trainer saddles 16 winners in a season, or 14 winners and HK$21 million in prize money, failure brings an unwanted “strike” and three of those can lead to a trainer losing their licence.

Ho had 15 wins on the board but had only HK$20,353,995 in earnings prior to tonight. He edged closer throughout the evening: Baby Storm and Hay Run took third and fourth in the opener, Chunghwa Jingshen was second in race two, Party Together gathered fifth-place money in race four and the trainer finally moved to safety when Magnificent held on for second in race eight.

Money Winner earned his second win at his 41st start with a late-closing dash from the tail under Victor Wong. The Me Tsui-trained grey, rated just 19 for this assignment, edged out fellow grey, Bundle Of Joy, the mount of Purton.

Hong Kong racing will resume with the 2020/21 season opener at Sha Tin on Saturday, 5 September.