Fast Most Furious for Purton and Hall, Yiu keeps Cruz at bay 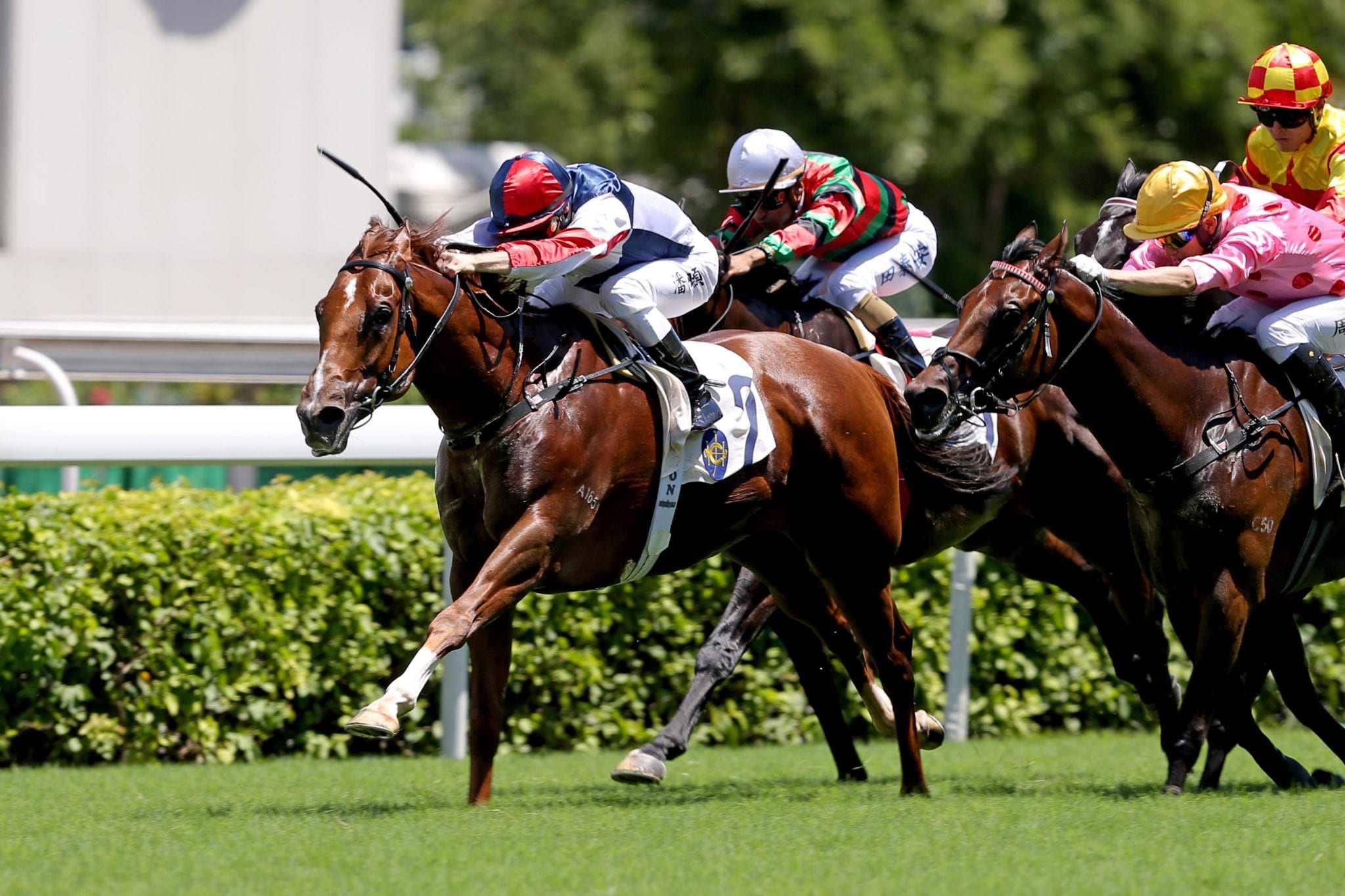 Zac Purton locked up a fourth Hong Kong champion jockey title when Fast Most Furious (130lb) carried him past the post for his 144th win of the campaign in the Class 1 Sha Tin Mile Trophy Handicap (1600m) on Sunday, 12 July.

The Australian ace had an eight-win lead at the start of the 11-race card, and that was cut to seven when rival Joao Moreira pinched the opener. But with the Brazilian suspended for the finale at Happy Valley on Wednesday, Purton put the matter beyond ‘ifs’ in the afternoon’s fourth contest, thanks to the David Hall-trained galloper.

“It’s unfortunate that it doesn’t go down to the last day and make it more interesting, but Zac’s put his hand up and is a deserved winner, I think,” Hall said.

Purton enjoyed a sweet run in the feature. A smart break from gate one enabled the champ to ease his mount back and shift to a one-off position, sixth of the eight runners; switched wider on the turn, the seven-year-old revved upside market leader General’s Delight (118lb) and quickened past at the 250m point, with his ears pricking.

Preciousship (117lb) chased hard under 10lb claimer Jerry Chau but had to settle for second, half a length off the victor, who stopped the clock at 1m 34.28s.

“Zac just sat there patiently, knowing he had the big weight. The pacing wasn’t super-fast so it wasn’t absolutely perfect for the horse but it was a smart ride and got the job done,” Hall said.

“He’s been a really good soldier for the stable, this horse. He just keeps turning up week in and week out; he’s won on the same day again.”

The Lope De Vega gelding won at this same fixture last year, when successful in the Class 2 Hong Kong Racehorse Owners Association Trophy Handicap (1400m). This time, he took his career tally to five wins from 29 races, having placed a neck third at his previous start in the Group 3 Lion Rock Trophy Handicap (1600m), behind Ka Ying Star and Southern Legend.

“It’s a good bit of karma I reckon because he deserved to win the last race,” Hall said. “It was a pretty good performance. It was just a matter of holding him together and getting the luck to go his way.

“There was a bit of a concern with the weight difference with Douglas’ horse (General’s Delight), he’s progressive and we had to give him 12lb so we needed a smart ride from Zac, and, as we all expect from him, he delivered in spades.

Hall is one of four trainers newly-licensed to utilise the Hong Kong Jockey Club’s facility at Conghua and his staff will be operational there from Wednesday (15 July).

We’ve all seen the results from Conghua have picked up a lot in the last six months and my own numbers have picked up and improved a bit, so this has come at the right time for me and I’m looking forward to it, because it will suit some horses, definitely,” the trainer said.

Hall fired a double when Sumstreetsumwhere rifled away with the Class 4 Big Profit Handicap (1400m) under Blake Shinn. It was the five-year-old’s second win at start 32, and first victory for Hall at his second start since transferring from the Peter Ho stable.

A Ricky Yiu birthday treble kept Tony Cruz at arm’s length at Sha Tin on Sunday (12 July): the trainers’ championship leader outdid his rival by three wins to two to hold a clear advantage going into the campaign’s final fixture.

Yiu, 63 today, ended the afternoon with 67 wins on the board, four clear of Cruz and the static Francis Lui, with nine races set for Wednesday (15 July) night at the downtown track.

“I’m starting to see a bit of daylight now – I think I can be a little bit more optimistic!” Yiu said after Super Oasis put some sheen to his haul in the Class 2 Hong Kong Racehorse Owners Association Trophy Handicap (1400m).

Jerry Chau’s 10lb claim meant the BMW Hong Kong Derby (2000m) 10th carried 120lb for a drop back in distance, and that proved right up his street.

“Dropping back to 1400 metres was a big task for him but the 10lb claim and the change of tactics were main factors; when he raced over further he travelled really well and hit the front too soon and would stop. Now, he chases, and he loved the race pattern today,” Yiu said.

“He was the only one in the race that participated in the Derby so he had the best form but it was always going to depend on how he would cope with the 1400m.”

“Every winner now is important, every bit counts,” Yiu said.

Cruz knows that all too well. The three-time champion struck first – having crept into contention from off the pace over the past few weeks – with the Karis Teetan-ridden Circuit Hassler in race three, the Class 4 All You Wish Handicap (1400m).

The former riding great applied pressure to Yiu with the Purton-ridden Mr Aldan’s score in race eight, the Class 3 Contentment Handicap (1600m), only for Super Oasis and Good Luck Friend to swing the pendulum a long way in Yiu’s favour.

“I need a few more,” Cruz said with a hint of resignation. “But I’m trying. We’re definitely going to keep pushing right to the end.”

Mr Aldan’s form dipped at his last start in early June when a distant 13th, with reported mucus in the trachea.

“This horse just needed a little help, so I gave him some time to freshen up since his last run and he’s come out and won well,” said Cruz.

Lui ended the day without success and, like Cruz, is looking for a huge return on Wednesday, while hoping Yiu has run out of steam.

Chau wrapped up with a brace when he drove the Douglas Whyte-trained Private Rocket home in the Class 3 Pingwu Spark Handicap (1400m), holding off the Yiu-trained runner-up Alcari.

Aiming for the Sky

Moreira was in treble form and he was buzzing after Sky Field put four lengths on the field in the Class 4 Mr Award Handicap (1200m).

The Caspar Fownes-trained three-year-old broke his maiden at the third attempt in a manner that points to a bright future.

“It’s been a while since I’ve ridden a nice young talent like him. The best part of it is that he feels like a raw type, that has plenty of improvement still,” Moreira said.

“There are no words to describe what a great feeling you get when you ride such a nice horse.”

Moreira took the first of the 11 races – the Class 5 Medic Kingdom Handicap (1400m) – when the John Moore-trained Kelmimi Wins (127lb) bobbed his nose on the line a fraction ahead of the Karis Teetan-ridden Adonis (127lb).

That was Moore’s final win at Sha Tin as a Hong Kong-licensed trainer.

Vigor Champ was on the mark in the Class 4 Victory Marvel Handicap (1200m) for trainer Jimmy Ting and jockey Keith Yeung.