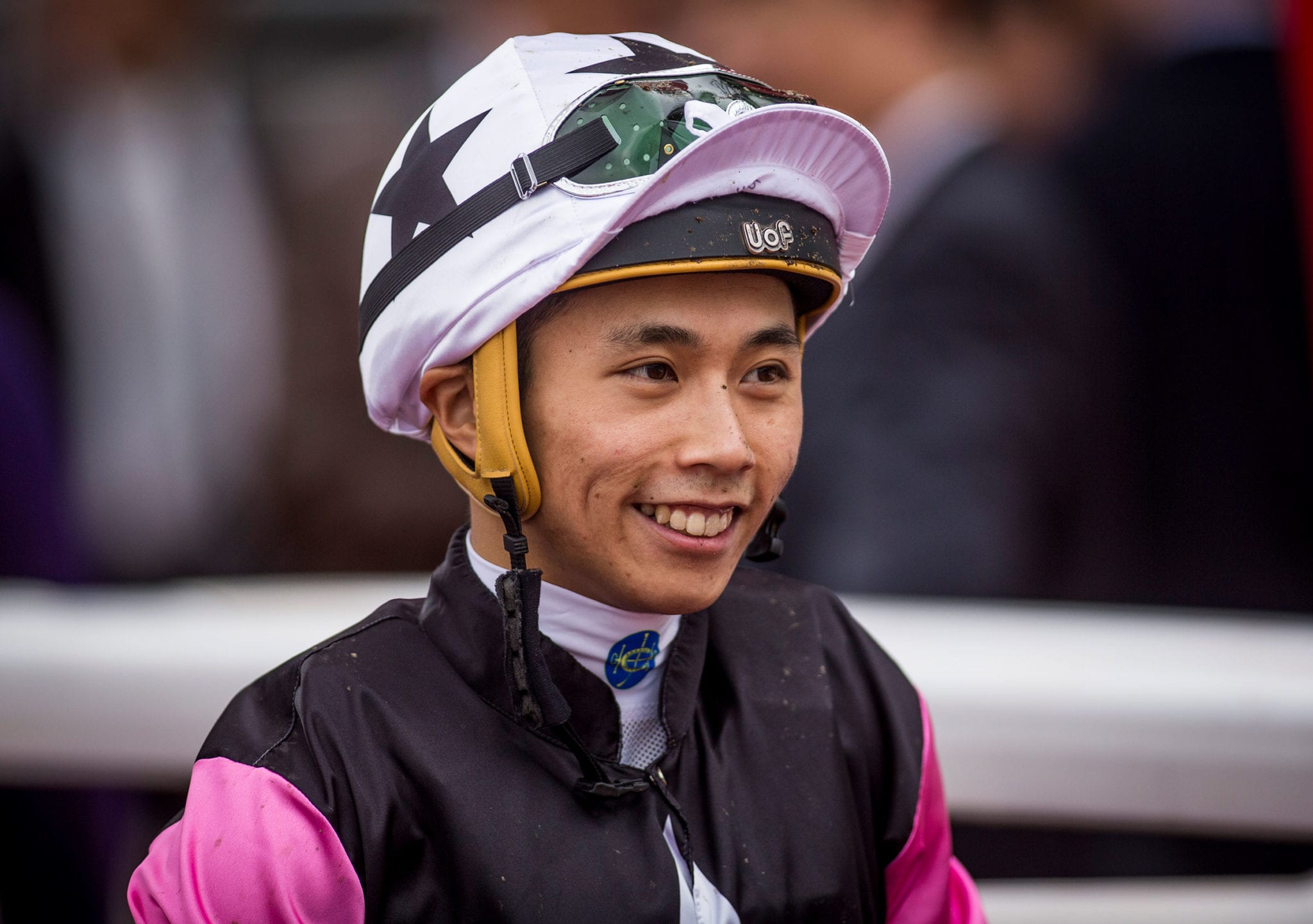 Matthew Poon is preparing for a big day in the saddle on Sunday (22 March) when he will jump aboard the Tony Cruz-trained Private Secretary for a first-time ride in the HK$20 million BMW Hong Kong Derby (2000m).

“The Derby is the most prestigious race in Hong Kong – it’s the biggest race here because it’s only for four-year-old’s, so it’s once in a lifetime for the horse and it’s really difficult to get a Derby ride,” Poon said.

“This race means a lot – it’s difficult to describe but I feel like the Hong Kong Derby is like the Melbourne Cup in Australia – this is our race – it’s special.”

Poon’s most successful day in the saddle so far came in late 2017, when he snared a four-timer at Happy Valley, but he has also tasted Group 3 success, thanks to Jolly Banner’s victory in the 2019 Bauhinia Sprint Trophy.

On Sunday, he has the chance to better both of those after travel restrictions ruled out 2007 Hong Kong Derby-winning jockey Brett Prebble. Poon is one of a handful of Hong Kong-based riders afforded the chance to take the Derby reins after big-name fly-in riders were grounded, in a year when fellow local lad Vincent Ho will partner the top-rated Golden Sixty.

“I’m very lucky and pleased that the owner and trainer have given me the opportunity,” Poon noted.

But luck is only part of the equation and Poon has long since been mentioned as a young talent with the raw materials in his make-up to evolve into a high-ranking jockey on the Hong Kong circuit.

A product of the Hong Kong Jockey Club Apprentice Jockeys’ School, Poon enjoyed a rapid rise from overseas training in South Australia to full Hong Kong jockey status. He graduated from his Hong Kong apprenticeship in October 2018, securing the required 70 wins in just 19 months, the second-fastest time after Matthew Chadwick.

Poon, 26, has since passed a century of Hong Kong career wins with 108 next to his name across four seasons, and is preparing to fulfill a boyhood dream as he gets ready to partner British import, Private Secretary, in Sunday’s race.

“I remember when I first started race-riding, I did an interview and they asked me which race I would like to win – I said the Hong Kong Derby and now I have a chance to ride in one,” Poon said.

His mount won the Listed Cocked Hat Stakes (2240m) at Goodwood pre-import, among two other wins for his previous handler, John Gosden.

“He’s only had a few starts in Hong Kong but overseas he won over further than 2000 (metres), so I think he can handle the distance,” Poon said.

Since his arrival, the Kingman four-year-old has raced three times, including an eye-catching debut win, though his recent two runs haven’t lived up to early expectations.

“He hasn’t had many starts in Hong Kong, so we can just hope for a good draw and try to put him in a comfortable position from there and maybe he can run well – we’ll see what happens,” Poon said.

And, if successful in Sunday’s Classic, the rider will become the first Hong Kong Jockey Club Apprentice Jockeys’ School graduate since Tony Cruz to win the race. Cruz rode four Derby winners, the latest being Makarpura Star in 1995, among his 946 winners in total and bagged six champion jockey titles.

“Mr. Cruz won lots of big races in Hong Kong – he used to be a champion jockey so it’s a pleasure to be able to ride for him and especially in the Derby – it’s a dream,” Poon said.

The young rider, crowned South Australia Champion Apprentice in 2015/16, honed his skills across two seasons Down Under as part of his training and tallied 117 wins from 862 rides, striking at 13.57%.

That garnered somewhat of a cult following and the nickname, “The Poon Train”, before a return to Hong Kong in March 2017.

“I always want to get better results – this season has been a bit difficult but I always try my hardest to get the best opportunities and to always get better – I work every morning so hopefully I can continue improving,” Poon said.

The BMW Hong Kong Derby was first run in 1873 and is the final leg of the Four-Year-Old Classic Series. It will see leading contender Golden Sixty look to become the second horse in Hong Kong history to sweep the series after Rapper Dragon in 2017.