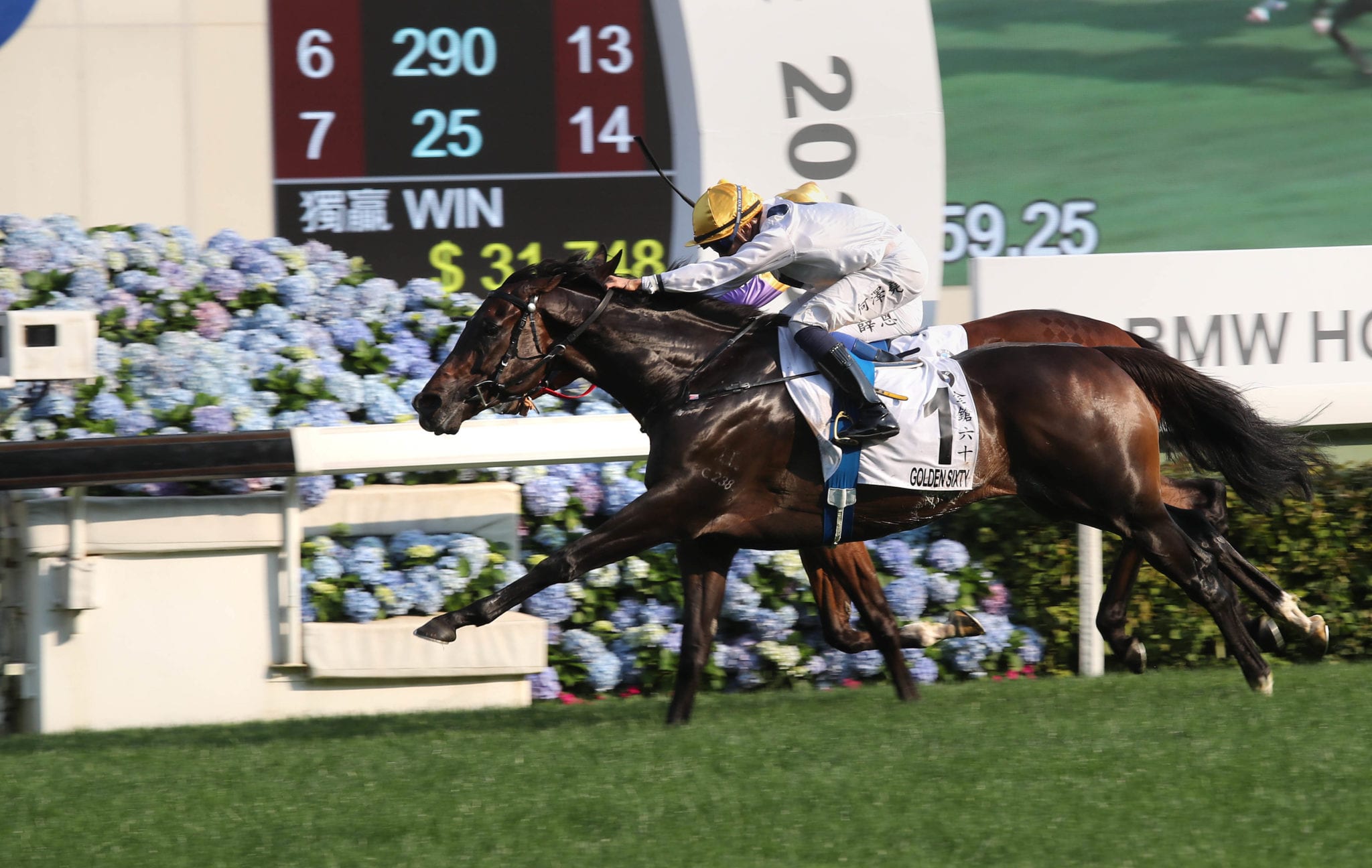 A final decision is yet to be made on Golden Sixty’s participation in the Group 1 FWD QEII Cup (2000m) on 26 April but trainer Francis Lui is pleased with the Medaglia d’Oro gelding following his sparkling BMW Hong Kong Derby (2000m) win last month.

“He seems good, he looks fine, everything is fine and his trackwork hasn’t shown anything wrong, it’s just I don’t want to push him,” Lui said.

Regular rider Vincent Ho partnered the gelding in a gallop yesterday morning (Tuesday, 14 April) and was satisfied, with the big race still a week and a half away.

“We’re still discussing it; there’s no rush,” he said. “I galloped him this morning and he still feels good.”

Golden Sixty completed a Classic Series sweep with his Derby win and the four-year-old has won seven on the bounce this season, including the Group 3 Chinese Club Challenge Cup Handicap (1400m) in which he defeated the multiple Group 1-placed Ka Ying Star.

“It’s a big break in between seasons so that’s why I have to consider the QEII Cup – we will keep him working as normal,” Lui said.

While Lui contemplates Golden Sixty’s next task, the form out of this year’s BMW Hong Kong Derby (2000m) will be put to the test at Happy Valley today (Wednesday, 15 April) when Reliable Team (128lb), Amazing Beats (123lb) and Private Secretary (130lb) contest the night’s finale, the Class 2 Cedar Handicap (1800m).

The Frankie Lor-trained Reliable Team finished a creditable fifth in the Derby, beaten four-and-a-half lengths, and will have Derby hero Ho in the plate from gate four.

“It was a good run in the Derby,” Lor said. “I’ve always thought this horse will be much improved next season. He still looks like a big baby and I still don’t think we’ve seen the best of him – if he looks good, we can target a few Group 3 races next season with him and go from there.

“His form’s still good – there are not many distance races for him this month so I picked out this one for him. He’s won a few races at Happy Valley and the 1800 (metres) is good for him.”

The Reliable Man gelding is a four-time winner, including thrice at the Valley, from 11 career starts.

“I think he has a good chance. Four is a good draw and he has pace so he can be wherever he wants and he’s a horse that relaxes well. Back to Class 2, I think he’s a good chance,” Ho said.

While Valley regular Reliable Team has yet to score in Class 2, Amazing Beats is already a winner in that grade but faces the unknown of navigating his way around the city circuit under lights for the first time. But the Australian import has trialled at Happy Valley and trainer Paul O’Sullivan is hoping that will prove to be beneficial.

“He’s back in the right handicap – so if you take his Derby run and the fact he’s been around the Valley before and he has the right gate with the blinkers going on, I think he should race well,” O’Sullivan said.

Known as Cossetot pre-import, the ex-Godolphin galloper won the Listed Tasmanian Derby (2200m) among two other successes before his arrival in Hong Kong but was only eighth in the BMW Hong Kong Derby.

“I think the points tallied up in the finish – you’re racing against horses rated 25 points higher and that’s just about how the Derby panned out,” O’Sullivan said, “I think he deserved every chance to be in there but he had every hope and at this stage he’s not up to that level.”

Karis Teetan will be in the plate and the duo will break from gate three.

The Tony Cruz-trained Private Secretary will attempt to return to the level of his smart first-up win at the Valley, having placed 13th in the Derby.

But the four-year-olds will step out in a field of 12 that includes two-time course and distance winner Helene Charisma (132lb) from the John Moore stable.

“Helene Charisma ran really well last time and he’s not a Sha Tin horse due to the fact of the track being too firm, it’s like a lot of European horses that come here, they’re not comfortable on those firm tracks,” Moore said.

Known as Mont Ormel in France pre-import, the seven-year-old won the Group 1 Grand Prix de Paris (2400m) but went 27 starts across three seasons before breaking his duck at the course and distance in March last year.

“He seems to have hit a purple patch of form at the moment, and, given some luck in running because he does have a tendency to hang, you’d have to think that he’s a live chance,” Moore said.

The John Size-trained Enrichment (121lb) is looking to snap two runner-up efforts with a second Hong Kong career win but will have to do so from gate 11.

“The trip doesn’t worry him – I think he’s fine at 1800 (metres), middle distance is ok for him and the horse is in good shape it’s just a bad gate for him, especially with the speed that he’s got so he might be awkwardly placed,” the 11-time champion trainer said.

The Teofilo five-year-old hasn’t won since a Class 2 over 2000m last season, two starts prior to his 12th-placed effort in the 2019 BMW Hong Kong Derby.

“He’s been in good form this season – he’s racing consistently and he’s ready to win a race but he’s just got that bad gate to contend with,” Size said.

Joao Moreira will be in the plate for today’s contest, the first time since guiding the gelding to his only Hong Kong win. The Brazilian ace hops up after partnering rival Righteous Doctrine (118lb) to two consecutive wins on the Sha Tin dirt.

“I was already booked to ride Enrichment, he’s a very good ride, his last run was very good,” Moreira said.

“I’m quite surprised that he hasn’t won another race since his first and only win but it seems like John Size has him picking up form, so he might go there and win another one but if not this time surely he’ll get another win very quickly,” Moreira said.

Moreira also directed praise toward the Michael Chang-trained Righteous Doctrine who will break from gate two.

“He seems like a dirt specialist, but he’s in really good form and I wouldn’t be surprised to see him perform as well as he has his last two starts,” he said.