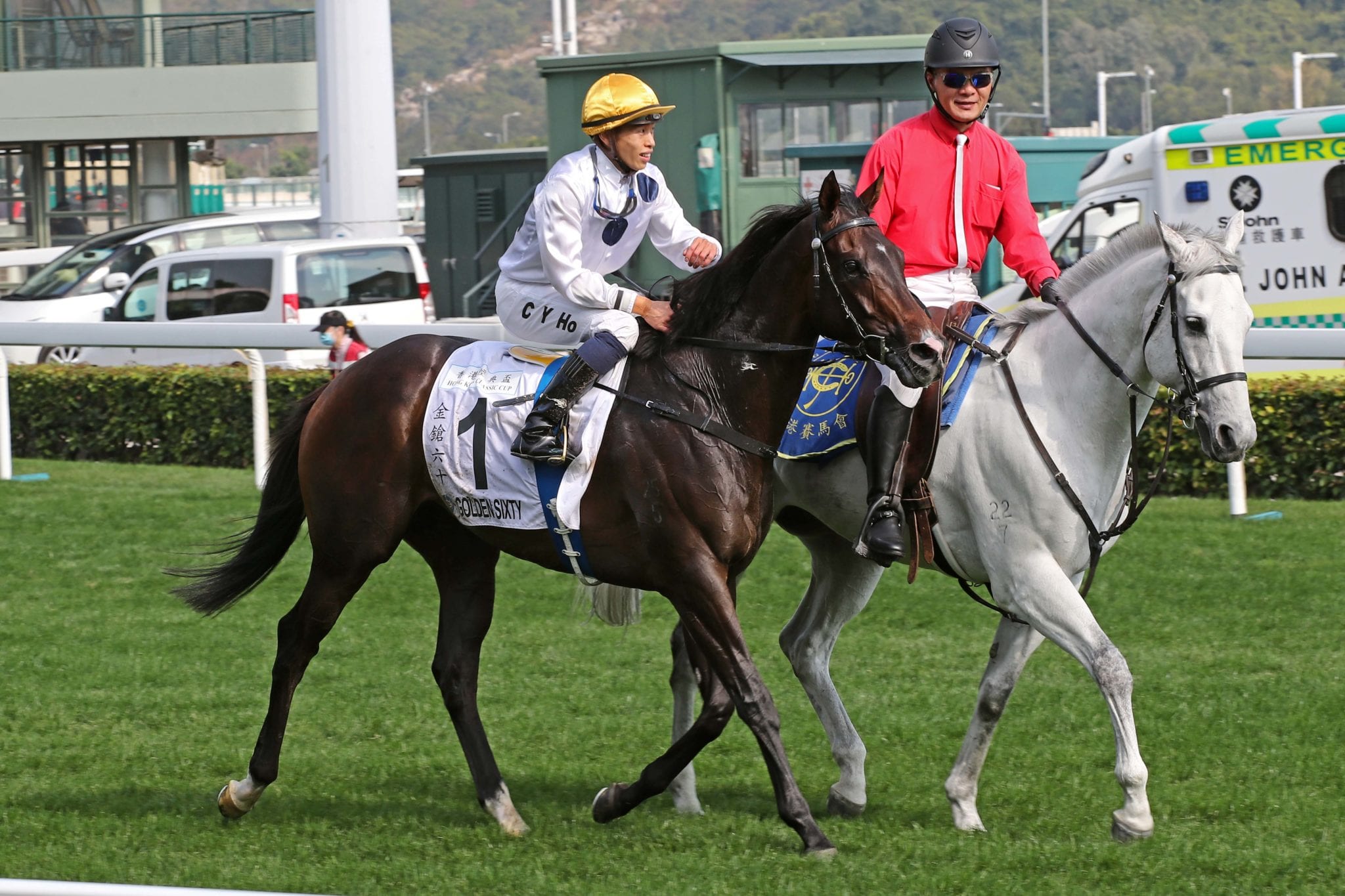 Vincent Ho shifts his weight to his left foot – the fingers of his right hand flick the outside seam of his thigh and for but a fleeting instant his steady lo-fi monotone stalls, intruded upon by what appears to be a prickling of self-consciousness.

Ho is not a natural in front of a TV camera. He is a professional though, in whatever he does; his discomfort is brushed off as he faces broadcaster Edward Sadler’s microphone with his usual measured responses, answering routine questions about weekend runners before barrier trials begin.

The rider is Hong Kong’s great ‘local’ hope. At Sha Tin on Sunday (22 March), he will hop aboard the circuit’s latest equine superstar-in-waiting, the dashing Golden Sixty, and, despite the burden of a city’s expectations upon his honed shoulders, he will forget the media hoopla and be at ease with leather in hands as he heads to post for the HK$20 million BMW Hong Kong Derby (2000m) – no ‘homegrown’ jockey has taken the prize in 25 years.

“Everything he does is about winning the race – he doesn’t think about not winning,” Golden Sixty’s handler Francis Lui says of him.

Trainer and jockey have forged a sit-up-and-take-note partnership in recent times. Last season they teamed for 20 wins and this year the running tally is 18. Golden Sixty has delivered nine of those in an irresistible run to the BMW Hong Kong Derby that has included successes in the Hong Kong Classic Mile (1600m) and Hong Kong Classic Cup (1800m).

Should Golden Sixty add the Derby to those two races, the seemingly brilliant gelding would match the hitherto unique feat of Rapper Dragon, who completed the Four-Year-Old Classic Series treble in 2017. And Ho would join the ‘Magic Man’ himself, Joao Moreira, as the only jockey to ride one horse to win all three races.

Away from the camera, Ho eases his guard, but just for a fraction while the Dictaphone records voice or graphite scratches paper – only when the media tools are downed will the natural warmth of Ho’s smile emerge, only then will he deliver a light-hearted aside.

He knows the importance of image; he is attuned to the fickle vagaries of Hong Kong racing; he has survived the cut throat jockeys’ room – the kid in the corner, bottom of the ladder below such immense characters as Douglas Whyte, Brett Prebble, Olivier Doleuze, Gerald Mosse, Moreira and Zac Purton.

“I think he came in a little bit under the radar, from my memory,” Purton says. “He didn’t come back from his training with a big rap on him or anything. But it’s never where you start, it’s where you end up, and Vincent has continually got better.”

Now that he is flourishing, Ho is not about to let brash confidence threaten a tried and trusted method of engagement.

“It’s not easy – I just need to constantly improve myself, stay humble and learn as much as I can,” he says.

“And I try not to think about winning the Derby because it’s not yet happened. I try to do my best and focus and try to perform well enough to get Golden Sixty there,” he says, in deadpan tone.

But to that statement he adds, “He’s a brilliant horse,” and the emotion of admiration cannot be masked.

“I’d love to get him there and be the top horse in Hong Kong but I just have to focus and I’d rather not think about it now. We all can enjoy it afterwards if it happens – but not think about that now.”

Ho’s primary focus has been and remains a desire to reach the very top of his profession. The signs are that he’s close to achieving that goal – very close – yet the idea that Ho will ever be satisfied seems absurd right now, such is his apparent obsession with improvement.

From Hong Kong’s Clearwater Bay – a normal kid with unassuming office worker parents – he started jumping poles at Tuen Mun Public Riding School. His ongoing racing education began at the Hong Kong Jockey Club’s Apprentice Jockeys’ School and included an overseas placement in New Zealand with Lance O’Sullivan, which yielded 44 winners; then came his apprentice days with Caspar Fownes, a man he can still be heard to refer to as boss and one of his biggest backers – Fownes helped him to the champion apprentice title in 2010/11.

“He’s always been a lovely kid, great manners, respectful, hard-working – he never gave me a day’s trouble,” Fownes says. “He always believed that he could be the best local jockey, that’s for sure, and he’s more than done that now; I’m sure that in his mind he feels he can compete at the ultimate level.”

But while riding in the white heat of Happy Valley and Sha Tin provides an excellent education, Ho, now 29, recognised early on that to be the best he must spread his wings and acquire knowledge further afield. He spent summers in France, learning another way of riding, understanding a different tempo, picking up ways to relax his mounts; and for the past two summers he has ridden in England, based with one of Britain’s greatest trainers, Mark Johnston.

“He’s always wanted to better himself,” Fownes says. “He didn’t mind working hard to achieve that, going away every summer to try and hone his skills, and as you can see that’s all paid off very nicely for him.”

Trainer Ricky Yiu, for whom Ho has partnered the late-maturing Preciousship to four wins this season, is forthright in his view that Ho is reaching his rightful place in Hong Kong’s notoriously tough riding rank.

“He’s the exceptional one among the local boys,” he says. “From day one until now his improvement has been outstanding – I don’t know where he learned it from – he’s one of the local boys that can be compared to the expat jockeys, even to Zac Purton or Joao Moreira.

“He’s representing Hong Kong – that’s how I see him. I haven’t seen a local boy progressing like him for a long time.”

No ‘homegrown’ rider has won the Hong Kong Derby since Tony Cruz guided Makarpura Star in 1995, when Ho was in kindergarten. In fact, in the almost 50 years of Hong Kong’s professional era, Cruz is one of only three ‘local’ jockeys to have won the race.

Ho ended last season as the Tony Cruz Award winner, an accolade given to the Hong Kong Jockey’s School Graduate with the most wins on the board. He had 56 firsts and placed fourth in the premiership behind Purton (168), Moreira (90) and Karis Teetan (84).

On the last day of March last year, he teamed with a talented young Australian galloper, a gelding by Medaglia d’Oro, and guided him to a debut win. Trainer Lui and owner Stanley Chan retained faith in Ho, and the team rattled a hat-trick of wins. Tellingly, Lui and Chan maintained loyalty when Golden Sixty fizzled out to 10th in his final outing of that season.

So often, that first defeat for a horse of such evident promise has seen a rider pitched to the side-line in favour of a big name – think Ho’s peer Derek Leung, jocked-off Beauty Generation despite his popular victory in the Group 1 LONGINES Hong Kong Mile. But not this time – Ho was aboard as usual first-up this season and the pairing has gone on to nail six straight wins, including those ‘Classic’ majors.

“Vincent has the ability but also he fits in well with the local trainers and he works hard, so people give him the opportunity,” Fownes says. “In Hong Kong, it’s very simple, if you get the opportunity you can perform and once you start to get the job done, they flock to you. People start to give you more and more decent rides so you can continue to improve and continue to get better.

“He’s getting there, numbers-wise he’s a long way off Zac and Joao, but he’s certainly getting the respect of a lot of the trainers and they’re happy to put him on.”

The pairing with Lui is running at a 15 per cent strike rate this term and the handler believes being aboard a horse like Golden Sixty has given the rider the boost that can take him to the next level.

“I think Golden Sixty has given him good confidence and jockeys need that. I think he has more confidence now – you can see it in the way he is riding. In the Classic Cup he had no choice but to wait behind horses but he did not panic,” Lui says.

“In that race, when Zac pressured him from the 600 (metres) on More Than This, he came round Vincent and blocked him in but Vincent didn’t care, he said ‘right, you can go do your thing’, he relaxed and then sprinted and got the job done beautifully,” Fownes says.

“I think that was an indication where, if he wanted to panic, he could have popped out at the same time and got going on the horse, and it might not have worked out – but he decided to wait and that was a winning move.”

When Ho did ‘push the button’ Golden Sixty sprinted but he needed a powerful rider in the saddle to drive him through a tough battle to the line. That ride, lined up alongside so many others, offers evidence of Ho’s development toward being a top-line jockey.

“He’s very versatile, he can ride in front, in midfield, behind – he’s a good judge of pace and strong in the finish,” Yiu says, adding that he believes Ho can finish this season third in the championship.

Fownes goes further: “He has what it takes to be a Group 1 rider, there’s no doubt, because he’s cool, he doesn’t panic and that’s a massive attribute to being a superstar jockey.

“He’s definitely champion jockey material. If he’s getting the same amount of quality rides that Zac and Joao get then of course he can fight with them, there’s no doubt, 100 per cent; he’s up there with them, but it’s about those quality rides, those two are going into a meeting with seven winning chances.”

Purton, too, ever the competitor, a ruthless rival and never one to give praise for the sake of giving it, can see the threat of the young gun’s potential.

“He’s holding his own, he’s doing very well; he’s getting a lot of opportunities, which you need, but with those opportunities you have to make the most of them and he’s doing a good job,” he says.

Ho is not up for the self-aggrandising fame game. He enjoys pounding pads at the gym, likes fast cars and international travel, but by and large he is not one for showing off a playboy lifestyle. What he wants to keep front and centre is his dedication to his profession – his desire to understand horses and what he can do to get the best out of them.

When Golden Sixty returned from his Classic Cup battle, the horse was edgy, ears flat, backing away from the gathered throng at the winner’s ceremonial arch. Ho did not hesitate, he skipped off, ignored calls to bring the horse for a souvenir picture, unsaddled and instructed the groom to take his steed away.

“He felt a bit stressed, so I got off straight away and let him do his thing – recover,” he says. “I didn’t want to put more pressure on him and prolong it for him, so I decided to jump off him earlier. The horses, they are the main priority, so whatever we do, we should think of them first.”

And that is only part of why Ho just might be destined to become a leading man on horseracing’s world stage.