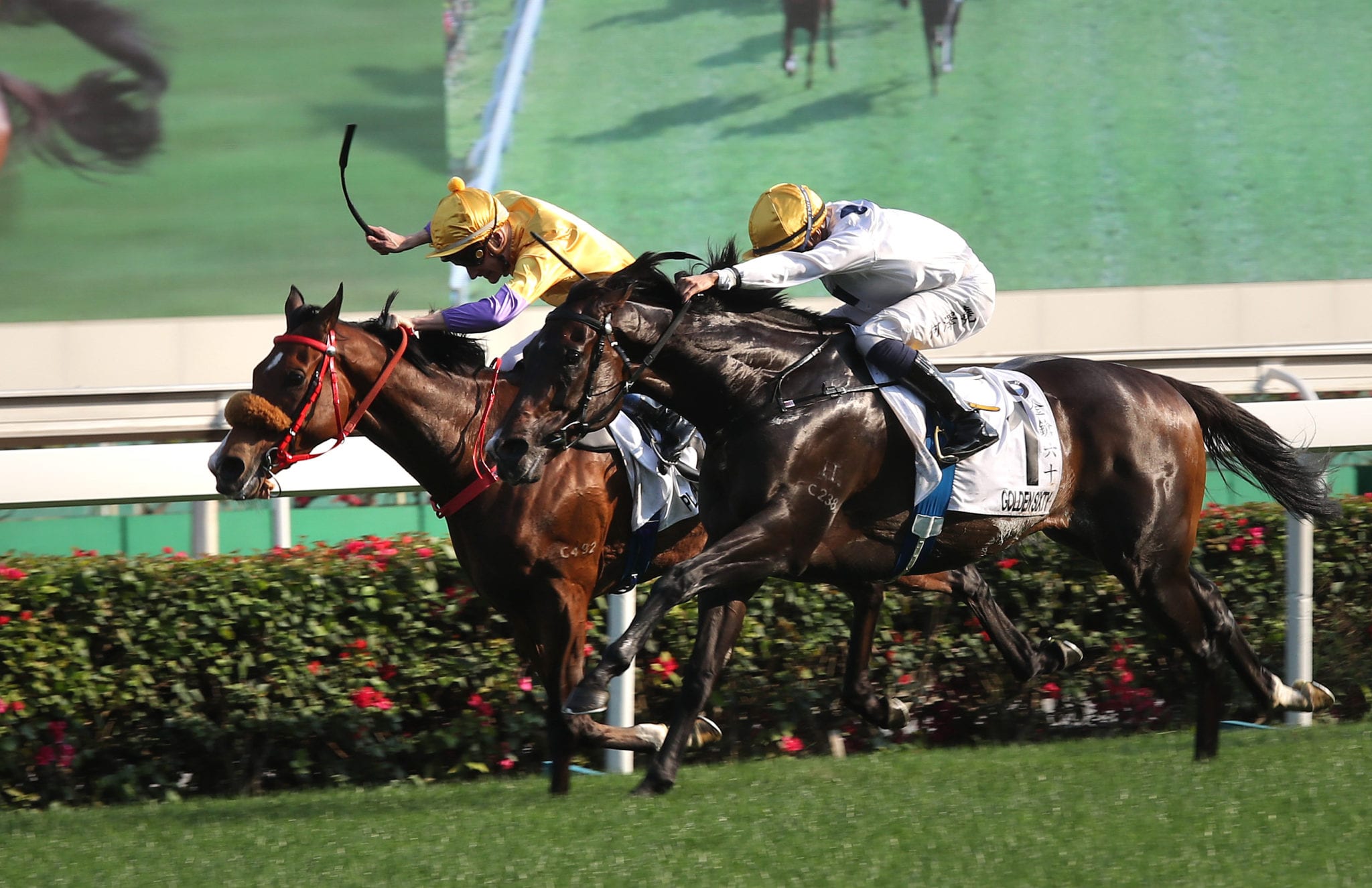 The victory was a first in the race for jockey Vincent Ho, who ended a run of outs for ‘homegrown’ riders in the ‘blue riband’ going back to 1995; it was also a first Derby for trainer Francis Lui and owner Stanley Chan, and the first time in the professional era – since 1971 – that a native Hong Kong trainer, jockey and owner combined for victory.

“I think I can sleep well tonight, all the pressure on my shoulders has just gone,” Ho said after he had driven the 1.7 favourite to a flashing neck win over the 289/1 shot Playa Del Puente.

The jockey deserves his night of peace, as does Golden Sixty. The brown gelding quickened from 11th at the top of the straight through a run that was, in equal measure, brilliant dash and depth-mining resolution.

His closing 400m split was completed in a lung-taxing 21.83s, the fastest at the course and distance since Designs On Rome clocked 21.82s in the 2014 Jockey Club Cup. Golden Sixty’s final sprint ensured a race record time of 2m 00.15s – but anything less would have brought nothing but a gallant defeat.

Lui admitted to being “excited and panicked” when Ho angled Golden Sixty from behind horses into a wide alley, at least six lengths behind Playa Del Puente. The runner-up had made an audacious burst clear of the pack under Blake Shinn.

“Round the bend, they slowed down the pace and that’s why the other horse was able to run away but Golden Sixty showed excellent acceleration. I was worried but I could see Golden Sixty was trying very hard,” Lui explained.

Much had been said and written pre-race about Ho’s rapid ascent in the past two seasons and when the chips were down, the burgeoning rider did not disappoint.

Ho could do nothing but sit and wait when Shinn opted to roll Playa Del Puente from last to first, between the 900m mark and the 700m point. That move saw Golden Sixty shuffled back to the rear behind a tempo that had steadied for a sprint home.

Shinn’s exquisite move gave him the edge, but Ho kept his cool.

“I wasn’t too worried,” Ho said. “I know my horse can produce a really good turn-of-foot and he relaxed really well for me through the race. When I saw the winning post, I knew I should be able to get him, as long as the other horse didn’t accelerate again.

“I didn’t mind the tempo – fast or slow – as long as my horse was relaxed and I knew I had to wait until the last bit to ask my horse to pick up. He’s got the best turn-of-foot in the field and I just had to be patient.”

Golden Sixty became only the second horse, after Rapper Dragon in 2017, to win all three legs of the Four-Year-Old Classic Series. This afternoon’s win followed his successes in the Hong Kong Classic Mile (1600m) and Hong Kong Classic Cup (1800m).

“It’s an amazing feeling to win all the four-year-old classics and he’s a superstar for sure; I think today, especially, it was very difficult to come from behind and sprint like that,” Ho, 29, said.

The win meant that he took his place as one of only four Hong Kong-born jockeys to have won the Hong Kong Derby in the past 50 years, and the first since Tony Cruz scored on Makarpura Star in 1995.

“It’s such an amazing feeling, my first Derby on a horse that I love so much and he’s such a good horse,” he said.

Lui, 61, was delighted to have finally won the Derby after 25 years as a trainer.