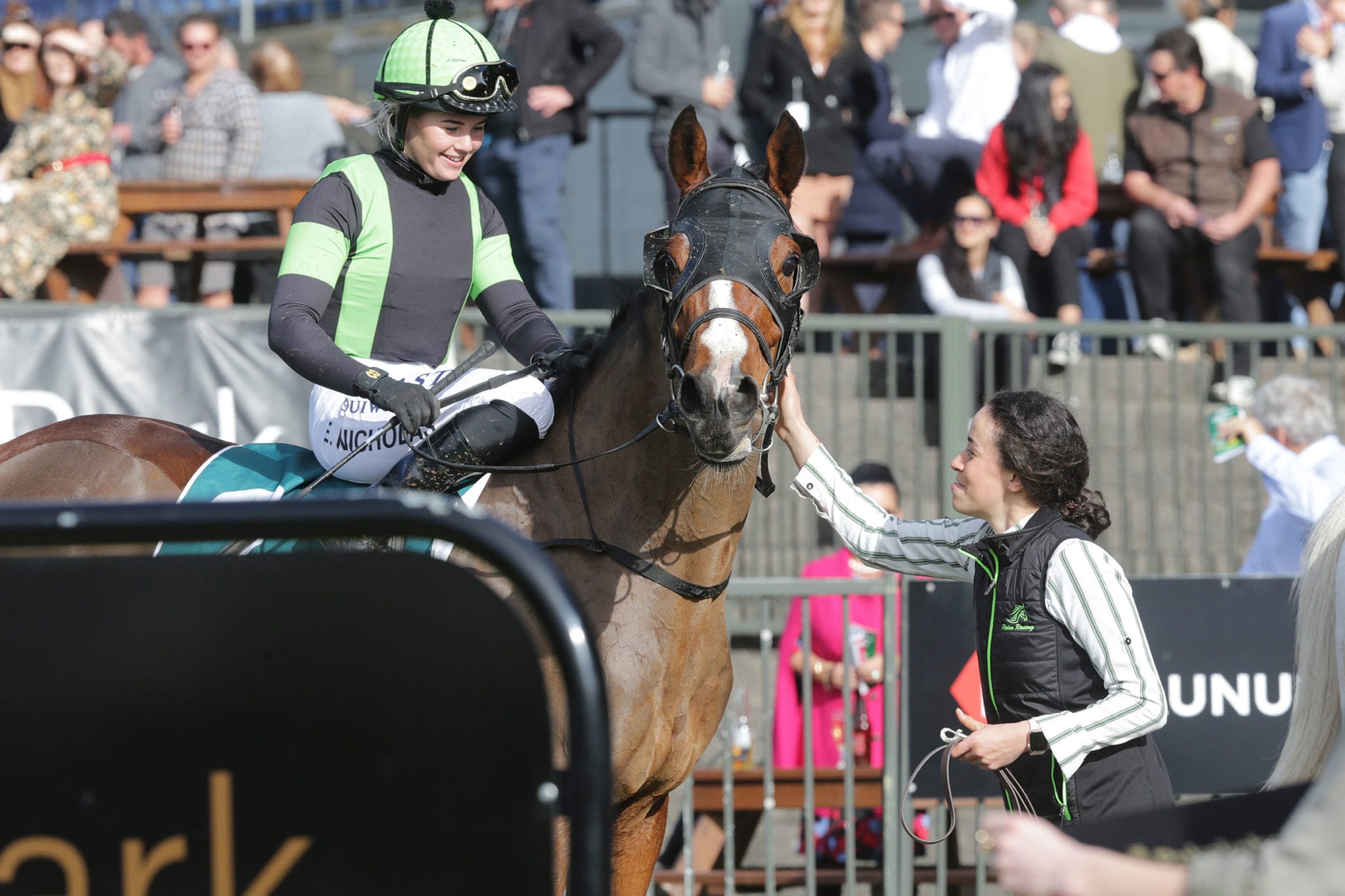 Six-year-old gelding Magnanimous Man showed his staying prowess when taking out the Dunstan 100% NZ Owned (2100m) for new trainers Craig and Shaun Phelan at Pukekohe on Saturday. Previously the winner of three races for Shaune Ritchie, Magnanimous Man joined the Phelan stable with a view to enhancing his jumping career and potentially heading across the Tasman.

The son of Nom du Jeu was assisted by Elen Nicholas’ four kilo claim as he ran down Arite Guru and Sweet Treat on a Heavy11 surface. “Shaune Ritchie and the GG Syndicate leased him to me,” Shaun Phelan said. “I organised for another of Shaune’s stayers Bee Tee Junior to go to a friend of mine, Rachael Cunningham, in Australia. “We thought Magnanimous Man hadn’t done enough at this stage to warrant sending him over to Australia, so I have taken him this season to see what I can do with him as a jumper. “He had already had a couple of runs for Shaune over the jumps and Colm Murray (Ritchie’s Assistant Trainer and soon to be training partner) had given him some schooling.”

Phelan, who is also a leading jumps rider, said Magnanimous Man got conditions to suit and he had some insight into the horse’s quirks prior to inheriting him, having ridden him to victory at Te Aroha for his previous trainer. “It has just been a matter of ticking him over and he is a bit of a thinker,” Phelan said. “He doesn’t really put in as much as what he should, so we have tried a couple of different things and the sort of racing at present is probably perfect for a horse like that.

“I have won a highweight on him and I know that sitting three-wide might not look ideal, but a horse like him is probably better off out there maintaining his momentum and the four kilos off really helped. “It might not have looked the prettiest ride but it was ideal for a horse like that.”

Phelan said he was keen to run Magnanimous Man again in the current season on the flat and would look for a similar race at Pukekohe. “We will probably find another race like that and while the tracks are wet, he handles them, and he has pulled up well. “If he keeps stepping up, he could be a horse for Australia next season. He is obviously a natural stayer and he is bred to stay.”

The A$300,000 Jericho Cup (4600m) in late November at Warrnambool could potentially be a long-range target for Magnanimous Man. “I would love to take a few over to Australia,” Phelan said. “Obviously there are restrictions at the moment with everything that is going on, but that was our plan. “Even if we can’t get over there before the end of the season, we would like to get over there for the Jericho Cup. “He is a staying type and there are not many horses that can win at 2100m fresh-up.”

The Phelan stable also sent out another new recruit in Van Blanc in the last race and the son of Rip Van Winkle ran well for second over a mile. “He has come to us as a possible jumper,” Phelan said. “Ben Foote arranged for the owners to give him to us to train and he is pretty forward. He has done a bit of schooling and got half his jumping ticket and he will have a hurdle start this year as well probably.”

The performance of the stable runners will have provided Shaun Phelan with the perfect tonic, with the talented horseman set to be sidelined from riding in the short-term after an accident during the week. “I broke my wrist during the week, so that means at least six weeks off,” he said. “I was schooling one before the jumping trials on Thursday and it was just bad luck.” Phelan said he was unlikely to be out of action long and he had plenty of incentive to get back in the saddle as soon as possible. “I have got to ride Magnanimous Man at his first hurdle start,” he said.