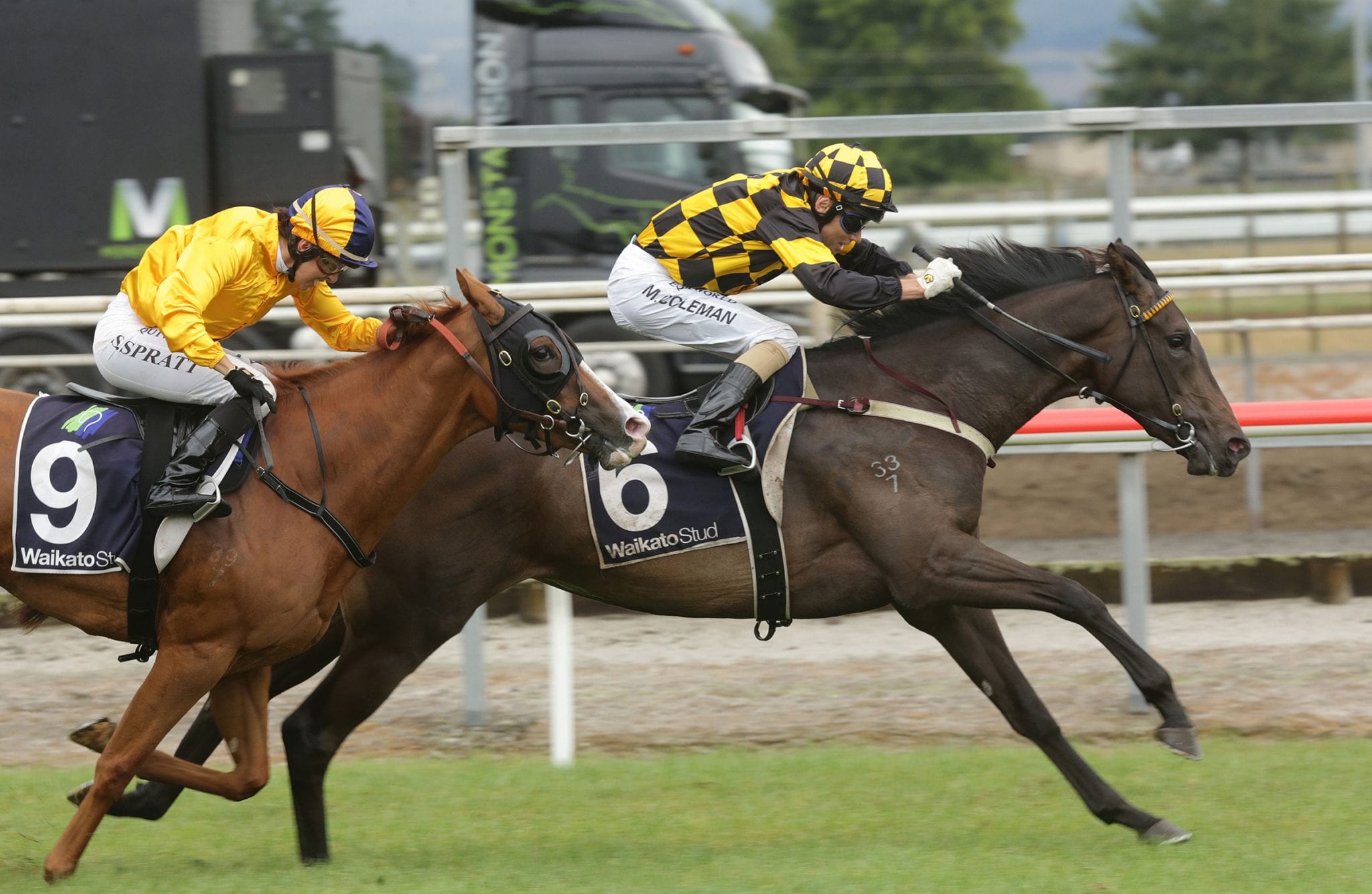 The pressure goes on Vernazza this weekend to maintain the big-race run of success being enjoyed by Cambridge Stud owners Brendan and Jo Lindsay with their fillies. Vernazza played her part in the couple’s black type winning streak over the last month when taking the Group 2 Matamata Breeders’ Stakes (1200m) last Saturday week and the Lance Noble-trained filly will attempt to successfully lift the bar a higher notch with a win in the Group 1 Sistema Stakes (1200m) at Ellerslie on Saturday.

A fortnight before Vernazza’s Matamata win, Letzbeglam carried the Lindsays black and yellow chequered colours to victory in the Group 2 Blue Diamond Prelude Fillies (1100m) at Caulfield and last Saturday the Lindsays were on course at Randwick to cheer on their dual Karaka Million winner Probabeel when she outshone the feats of both those fillies when breaking through for a deserved top level win in the Group 1 Surround Stakes (1400m) at Randwick.

“It was an enormous thrill to see her (Probabeel) win,” Brendan Lindsay said. “The only disappointing fact was that just Jo and I were there and we couldn’t share the occasion with friends and family, like we did when she won the Karaka Million. “It’s been a big four weeks for us with two Group 2 wins and now a Group 1. And it’s great to know we’ve got three exciting fillies to eventually come back to the farm (Cambridge Stud) to enhance our business.

“It’s no secret that we’re rebuilding Cambridge Stud and putting our own handle on it and with fillies like this it’s going to pay dividends in the long term. “It also helps to build the momentum for all our staff, proving where we are going and what we can achieve. “We got into it (horse racing) because we like the sport and enjoy the industry and we’re out to do the best we can.”

The Lindsays certainly deserve their latest run of black-type success after a devastating series of bad luck with their Cambridge Stud sires with the deaths of exciting new shuttle sire Roaring Lion, Burgundy and then Tavistock all within five months. “In this racing game we all experience bad luck and I suppose it was our turn and it was a real low time for a while losing the stallions, but now it’s all coming together and we’re having some good luck,” Lindsay said.

The Lindsays have built up a broodmare band of about 130 mares, but have been unsuccessful in their recent pursuits for replacement sires at Cambridge Stud, but Lindsay will continue his search. One possible potential sire is Not An Option, a son of Not A Single Doubt the Lindsays part-own. He is a Group 2 winner, but he has to achieve plenty more.

The Tony Pike-trained two-year-old won his first two starts, including the Group 2 Wakefield Challenge Stakes (1100m), and was runner-up to Play That Song in the Group 2 Eclipse Stakes (1200m) at Ellerslie before finishing down the track in the Listed Karaka Million 2YO (1200m) on January 25 and being sent out for a spell at Cambridge Stud.

“He was flown to Sydney yesterday (Monday) and will trial there and if Tony is happy with him he’ll run in the Kindergarten Stakes (Group 3, 1100m) at Randwick on April 4,” Lindsay said. “The idea has been to give him the trip away to see how he copes with a view to him making a spring three-year-old.”

The Lindsays have about 20 horses in work in Australia spread over 16 trainers in Sydney and Melbourne, while on the homefront their private trainer Lance Noble has 25 in work and they have another 25 with other New Zealand trainers.

Letzbeglam, trained by Trent Busuttin and Natalie Young, has returned to spell at the Lindsays’ Karaka property since finishing sixth to stablemate Tagaloa in the Group 1 Blue Diamond Stakes (1200m) last month. “She was a bit gingery after the Blue Diamond and after a spell here she will be sent back to Trent and Natalie for spring racing,” Lindsay said. “She’s done enough to prove she’s up to top class and should be exciting in the spring.”

Already on the Karaka property is Still Single, a More Than Ready three-year-old filly who was a winner for Chris Waller in Sydney last October after being runner-up in the Group 2 Sweet Embrace Stakes (1200m) six months earlier. “She will stay here,” Lindsay said. “Lance (Noble) will trial here and try and get a good result (more black type) with her.”

The Lindsays biggest current interest in Sydney is Probabeel, who provided the first leg of a magical Group 1 double with Te Akau Shark for trainer Jamie Richards. Probabeel will start next in the Group 2 Phar Lap Stakes (1500m) at Rosehill on March 14 followed by the Group 1 Vinery Stud Stakes (2000m) a fortnight later and, though she is nominated for the Group 1 Australian Oaks (2400m) at Randwick on April 11, a decision still has to be made whether to press on for that feature.

“At this stage she’s 50/50 to go for the Oaks,” Lindsay said. “The Vinery Stakes is the one she has been actually set for.” The Lindsays plan to be on hand for the Vinery Stud Stakes, but will miss Probabeel’s start in the Phar Lap Stakes on Saturday week as they will be at Trentham cheering on Meghan in the Group 1 Al Basti Equiworld Dubai New Zealand Oaks (2400m). “She’ll have her work cut out beating Jennifer Eccles, but we’re very happy with her,” Lindsay said. “She went a top race last Saturday when third (in the Group 2 Sunline Vase, 2100m) and was the last to pull up.”

This weekend the Lindsays will be staying closer to home, heading to Ellerslie, where Vernazza will attempt to extend her winning record to three from four starts. “I went out to Karaka and watched her work this morning (Tuesday) and we couldn’t be happier with her,” Lindsay said. “She has trained on well and is a real chance. She keeps growing and the best of her is still to come.”