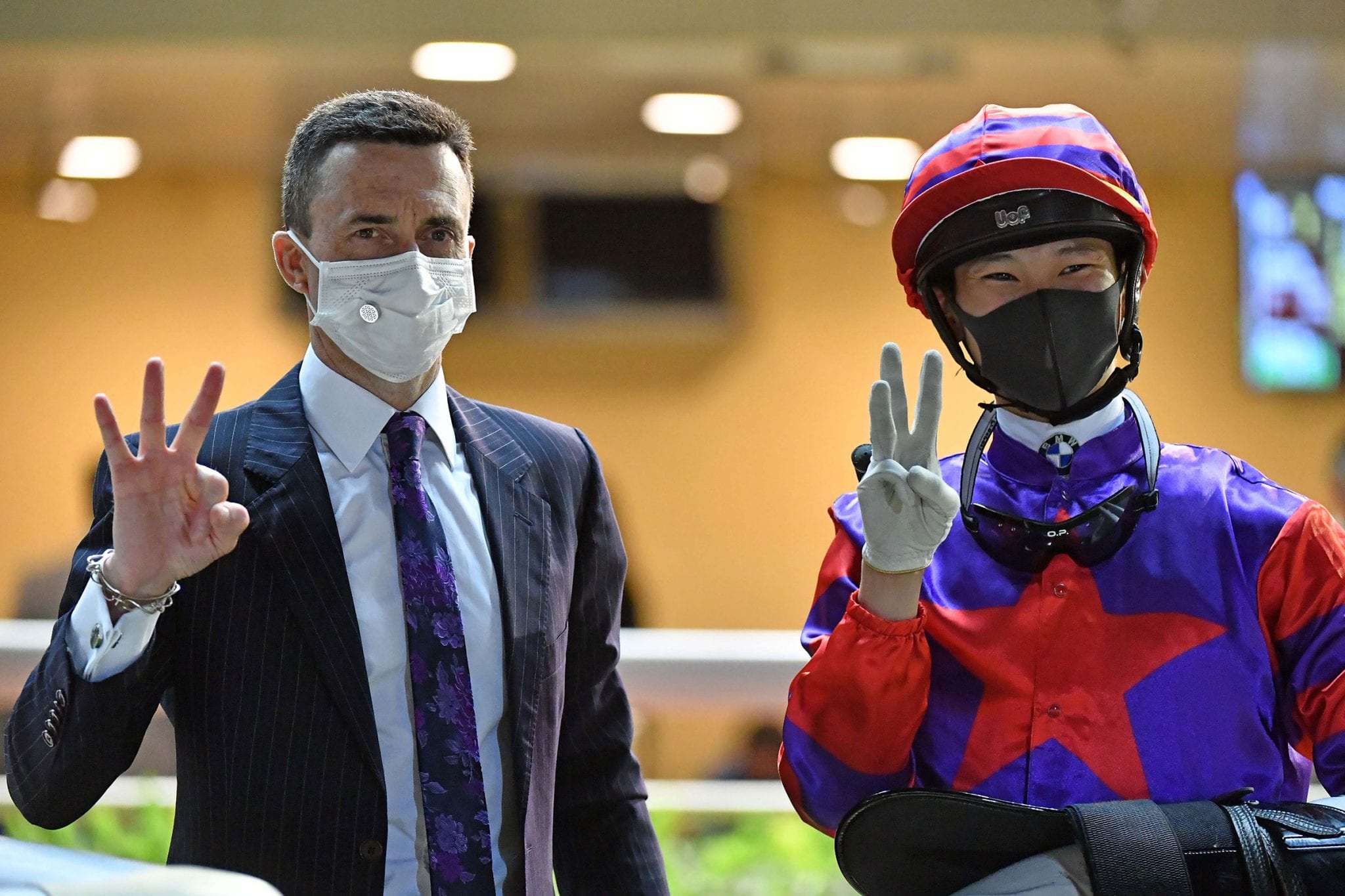 In a symbolic confluence of generations, Douglas Whyte and Jerry Chau shared the Happy Valley spotlight with milestone trebles on Wednesday night (5 May) as both master and apprentice shone with landmark success.

Chau’s inexorable advance towards the upper echelon of the Hong Kong racing fraternity continued apace when Whyte’s protege reached the jurisdiction’s 45-win milestone with a double, marking the end of his seven-pound allowance.

Whyte, a 13-time champion jockey, notched his first three-timer as a trainer – two of them in partnership with Chau – as the South African horseman continued to forge new territory after taking out his training licence in 2019/20.

“I’ve had a nice run of seconds, so it’s nice to now have some winners,” Whyte said, after boosting his 2020/21 tally to 26 after prevailing with McLucky, Harmony Fire and Noble Desire. “Just keep chipping away, it’s nice to have a treble – it means a lot.”

The most successful jockey in Hong Kong history, Whyte was elated for Chau, who rode his first winner in Hong Kong on May 9, 2020, but from Saturday (8 May) will be able to claim five pounds after out-riding the first portion of his allowance.

“He’s a hard worker, he’s got a lovely style and he’s riding horses with a bit of thought – he’s putting his head into things – and the results have shown,” Whyte said of Chau. “It’s good for him. I’m happy for him because he can now claim five (pounds) and he’s going to have more opportunities.”

Under Hong Kong rules, the 21-year-old’s claim will reduce to three pounds once he logs 70 victories after success aboard David Hall’s Total Power in the Class 4 To Kwa Wan Handicap (1650m) catapulted the young rider to 45 Hong Kong career triumphs in total.

Having returned to Hong Kong last year after a grounding stint in South Australia, where he notched 77 winners, Chau currently sits sixth in the premiership with 39 wins behind Joao Moreira (118), Zac Purton (102), Karis Teetan (58), Alexis Badel (50) and Vincent Ho (49).

Reigning champion jockey Purton and Danny Shum combined in familiar fashion – for the 26th time this season – when Exuberant broke through in the first section of the Class 4 Ma Tau Wai Handicap (1200m), posting his first win at his fourth start.

While Purton trails Moreira by 16 in the jockeys’ championship, Shum has 53 successes this term to sit joint third overall with Frankie Lor behind John Size (59) and Caspar Fownes (58) after completing a double with Handsome Bo Bo’s victory in the program’s feature, the Class 2 Hok Yuen Handicap (1200m).

The Helmet gelding’s triumph also allowed Alexis Badel to reach the 50-win landmark for the season after the Frenchman produced a brilliant ride aboard Sunny Star to snare the Class 3 Kowloon City Handicap (1650m) for Francis Lui.

“He can probably go to Class 2, it all depends on the program,” Lui said of Sunny Star. “If it works out, he can keep on running here at Happy Valley over this distance.

“He’s very relaxed and he might be able to run over further in the future. He’s a young horse and he just keeps improving as he matures.”

“The horse has been luckless, he’s had very awkward draws to contend with and I thought he’s run with purpose each time. He was very unlucky last time, he got checked at a crucial stage and I thought the horse showed a lot of courage to pick himself up and finish the race off,” Whyte said.

“So, when he got gate one tonight, it was a lot less complicated and he put himself in a winnable position and really delivered and when the split came, he kicked beautifully.”

Whyte believes Harmony Fire can contend in Class 3 but is yet to decide if the Brazen Beau gelding presses on this preparation.

“It’s now a decision that I make whether I give him his time off and bring him back early for next season or persevere with him. He’s a young horse and he’s done a very good job – I’ll see how he comes out of this race,” Whyte said.

“There’s no rush with him. He’s got a nice future, he’s going forward.”

“He’s an honest horse but he’s a handful to both train and to get his confidence. He’s needs to follow a horse the whole time. As soon as he puts his head in front, he thinks his job is done and he holds back on you.

“So, I’ll take that win with both hands and I’m very grateful for the good job Matthew did on him.”

Moreira produced a trademark ride on Ricky Yiu’s Majestic Star – an impressive I Am Invincible gelding – to land the second section of the Class 3 Hung Hom Bay Handicap (1200m). Chau and Whyte secured the first section of the handicap with Snitzel gelding McLucky.

David Hall reached the 25-win mark with Total Power’s victory in the Class 4 To Kwa Wan Handicap (1650m) after Richard Gibson notched his 17th winner of the season, successfully combining with Karis Teetan and Fortune Hero to snare the second section of the Class 4 Ma Tau Wai Handicap (1200m).