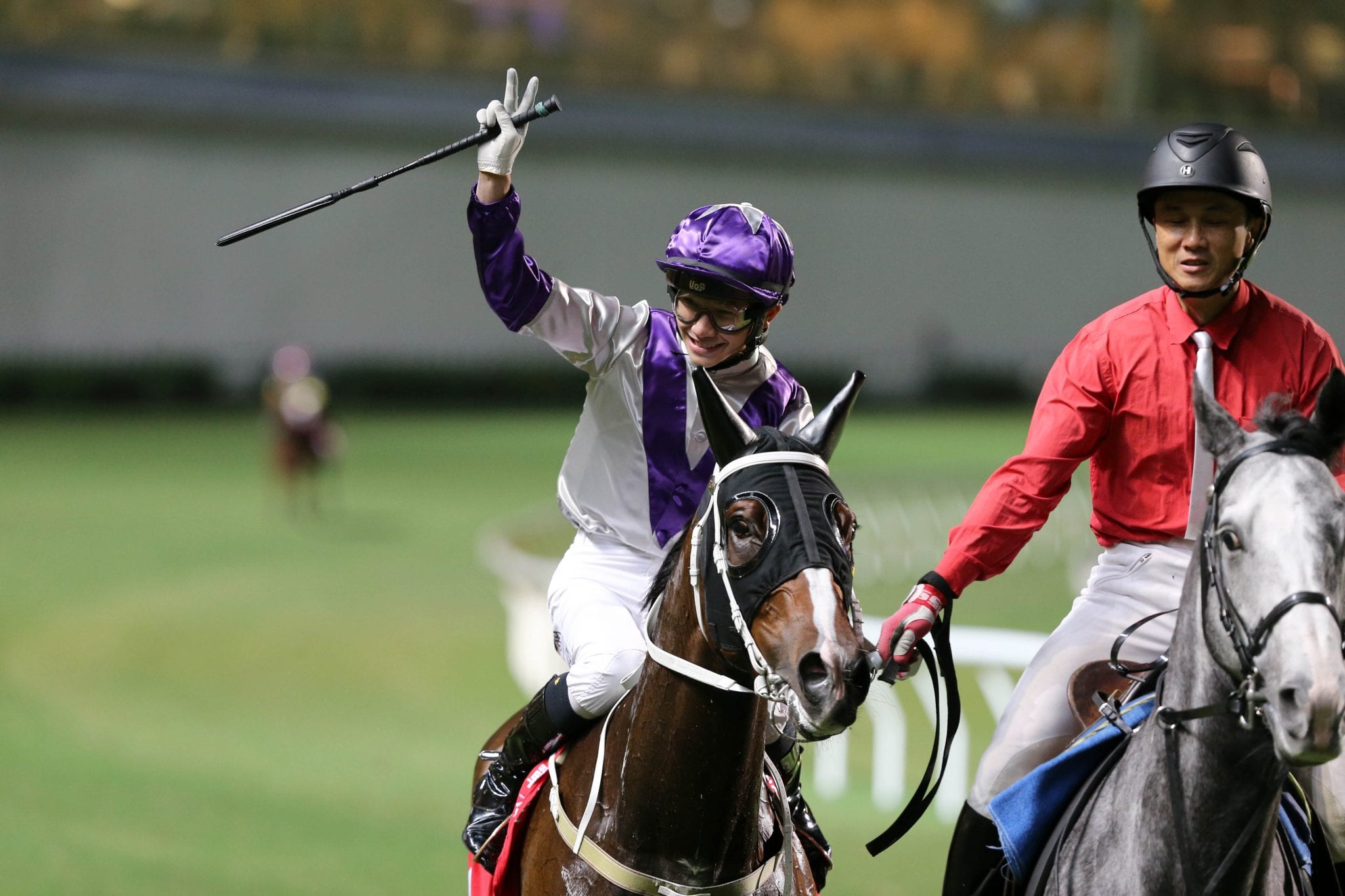 “It feels like a dream – it’s amazing, everything went to plan, it’s just unbelievable,” the 20-year-old said.

“He’s got a lot of people behind him and I think that he’s showing everybody, including himself, that with the help and the support, he can be a very competitive rider in Hong Kong,” Whyte said.

Chau has returned seven wins from the first 12 race meetings this term, including his maiden treble, but sits out the next two meetings due to suspension.

“I have a break coming up but after that I’ll just keep working hard. I won’t sleep very well tonight though, I start work tomorrow at 4am to work five horses,” Chau said.

“He’s got lovely balance,” Whyte said. “He’s got a lovely seat on a horse, he still needs to fine tune his start to the straight, his positioning and relaxing a horse and staying out of trouble, but he’s got a lovely style about him and the most important thing is that his horses run for him – if a horse runs for you that’s where it all starts.

“I have been helping him, but it’s not just me it’s the whole force behind him: Felix Coetzee does an amazing job with the apprentices, and so does Amy Chan – he has a good group behind him.”

Chau’s treble included two wins for the Cruz stable. The first of those came aboard Bullish Brother in section two of the Class 4 Mount Kellett Handicap (1200m), before Buddies added the extra gloss to the rider’s night.

“Bullish Brother was really tough, I knew in the last 200 metres though that he could pass the leader, so I just kept his momentum and he did well,” Chau said.

Chau kicked off his three-timer with victory aboard the David Hall-trained Sumstreetsumwhere in the Class 4 Victoria Gap Handicap (1650m).

The 10lb claimer’s other two mounts on the card finished second and third.

Whyte was not to be completely outshone by his apprentice: the legendary jockey-turned-trainer ensured he didn’t go home empty handed when Tashidelek took the Class 3 Mount Davis Handicap (1800m) under Alexis Badel.

The Street Cry gelding joined Whyte’s stable in the off season from stable of the recently retired John Moore, and has won both of his starts for his new yard.

“He stepped into my yard and he hasn’t put a foot wrong,” Whyte noted. “He’s been a pleasure to train and he’s probably one of the favourite horses in the yard, not because he’s won but because of his whole attitude – he’s a beautiful horse to be around and he’s a lovely horse to be a part of and be associated with.”

French ace Badel sent the gelding forward from gate 10 to sit outside the lead, before taking over at the 300m mark to record a half-length victory.

“He’s a nice horse – he’s going well,” Badel said. “The slow tempo with a wide gate was a big advantage for him because I was able to travel easily enough on the bit and didn’t have to use too much energy to get him to travel – it was a great effort.”

Karis Teetan returned from a two-meeting suspension with a tough, on-pace victory aboard Here Comes Ted for trainer David Ferraris in the first section of the Class 4 Mount Kellett Handicap (1200m).

The New Zealand-bred rolled forward under the Mauritian ace from the wide draw but was caught three-wide early on as Chau kicked up to sit inside of him aboard Sprint Forward. Teetan though, kept his cool and chose to roll forward and take the lead at the 650m mark, but the apprentice was not done and the gallopers vied neck-and-neck in the straight, with Teetan’s mount prevailing by a neck.

“I came out and I didn’t want to lead and I was forced to keep moving but I think it worked out well: when those horses came to challenge me, he kicked well,” Teetan said.

The four-year-old takes his record to two wins from 13 starts in Hong Kong, both wins coming at the city circuit under Teetan.

“He was drawn in gate 11, we tried to push forward but the young apprentice just kept him wide,” Ferraris said. “He had no choice but to go forward otherwise he would have been three-deep. It was the right choice in hindsight – the best choice and he won a very good race.”

The Per Incanto bay took 10 starts to get his first win, but now has two success from his last four runs, including two other top three finishes.

Joao Moreira also returned from a two-meeting suspension with a win and did so aboard the John Size-trained Wild West Wing in the Class 4 Mount Gough Handicap (1000m).

“The horse had a good draw and he hit his straps last start and I think today he just got every benefit, but thanks to Francis Lui for giving me the ride,” Poon said. The Star Witness gelding was grabbing his first win for his new handler and did so with the addition of the tongue-tie for the first time.

Derek Leung and Dennis Yip combined in the opener with Fantastic Fabio, who grabbed his sixth career-win, scoring in the Class 5 Wan Chai Gap Handicap (1200m).