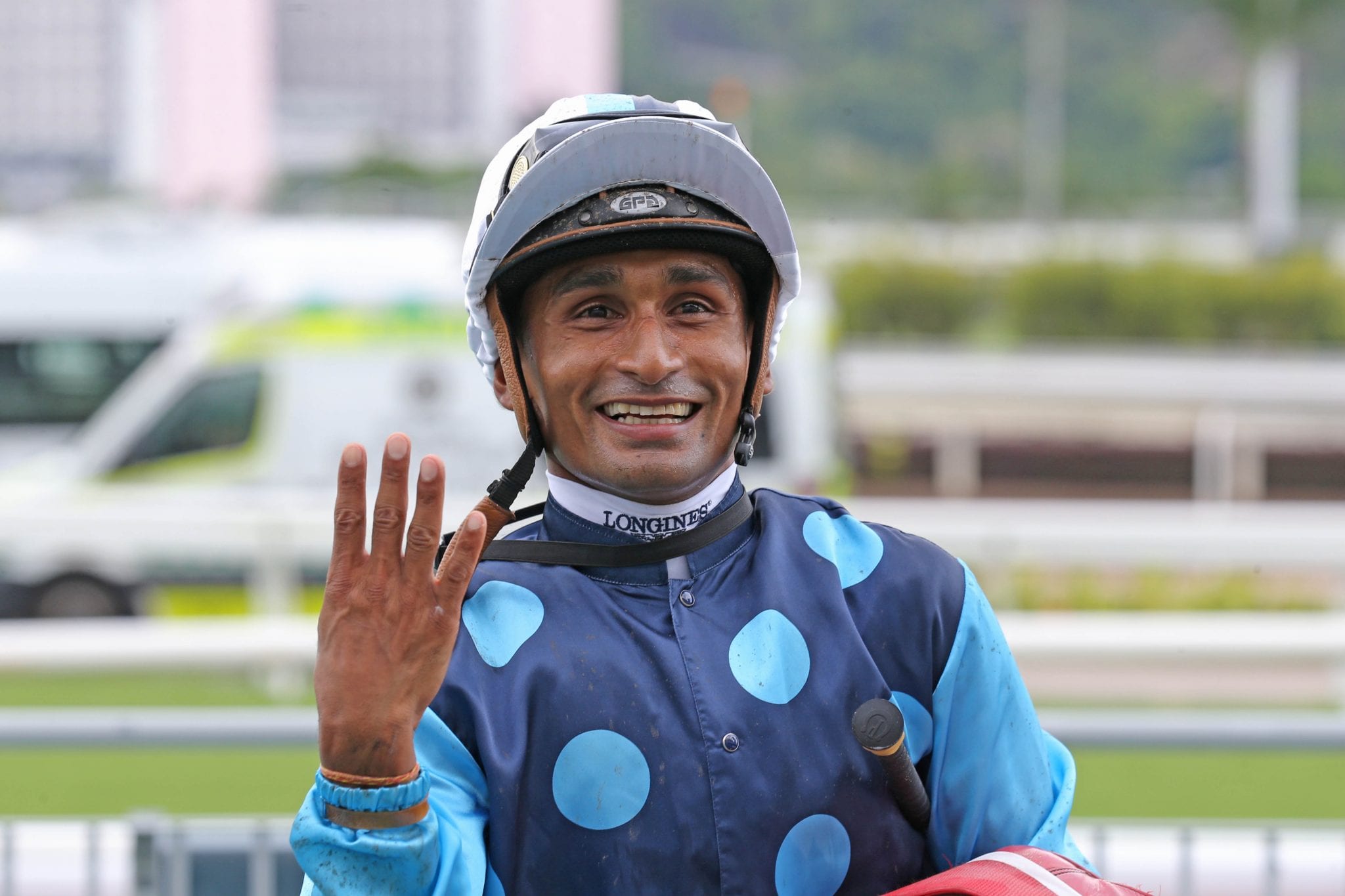 Jockey Karis Teetan landed a treble at Sha Tin yesterday (13 September) which included the milestone of his 400th win in Hong Kong aboard Will Power in race seven. The dirt specialist took the Class 3 Jordan Handicap (1200m) to record his fourth win from seven starts on the dirt and provide Teetan’s landmark.

“I couldn’t believe it, I didn’t even know to be honest but it’s something special and it takes a lot of hard work. I didn’t even know but it’s something that will encourage me now to work harder and look forward to more winners. “It’s been a pleasure to work with all of the trainers, owners and everyone involved – I’m really enjoying it and I just hope it keeps rolling,” Teetan said.

The Mauritian enjoyed his best campaign last season, tallying a single-season personal high of 93 wins to finish third in the premiership and also bagged his second Sha Tin Group 1 on Mr Stunning in the 2020 Chairman’s Sprint Prize (1200m).

“I’ve never sort of counted the winners. I just ride as many winners as I can but to get to this number, it’s big enough for me at this stage and I’m really looking forward to growing that number,” the 30-year-old said.

Will Power was a last-season sensation, rising 28 points through the handicap with three wins to his name and today returned in fine form, lugging top-weight to a first-up Class 3 success. “He’s just a pleasure to ride. I’ve been doing a lot of work with him in the morning and, of course, Douglas (Whyte) has been good to me and putting me on a few horses in the morning,” Teetan said.

“He’s just grown into being a better horse this season. I know he’s dropped down in class but he had to carry a bit of weight and he did a good job, thanks to Douglas (Whyte) and his team for their support,” Teetan added.

Teetan got off to a flyer, winning the opener, the first division of the Class 4 Mong Kok Handicap (1200m) aboard the Me Tsui-trained Handsome Rebel.

“I had a good season last season. I just hope that I can improve from that and learn more from last season, learning what I did right and wrong and I think I can pick up a few more winners, so I just need to keep my head down and keep working hard,” Teetan said.

Teetan wasn’t on the 400 mark for long as he took the Sha Tin finale, the Class 3 King’s Park Handicap (1400m) aboard the Tony Cruz-trained Circuit Glory to bring up a treble.

Sky Field scored a dazzling victory in the Class 3 Hung Hom Handicap (1200m), demonstrating an electrifying turn-of-foot in the straight to make a big statement for jockey Joao Moreira and trainer Caspar Fownes.

The Deep Field four-year-old didn’t enjoy the easiest of passages but once clear in the straight he was able to stretch out and win with plenty in hand to cement his status as a leading contender for this season’s three-race Four-Year-Old Classic Series.

“He’s special, he really excites me in the morning and he’s a pleasure to work with because he’s still raw – there’s so much more,” Fownes said.

The lightly raced talent secured his second win at his fourth start, notably after incurring an eye-catching 14-point ratings rise off the back of his last win.

“I always knew he was something special from the early days, he had a bit of a wow factor but he’s not straightforward – he’s a horse that has problems. He’s always consistently got an issue here and there so we have to keep him sound is the key, if we can do that then he’ll do the rest,” Fownes said.

The Australian-bred broke from gate eight and unwound a strong finish to win by a decisive length and a half. Joao Moreira spoke of the four-year-old’s potential post-race: “He’s a classy horse, a very classy horse, he’s got it in him,” Moreira said.

Hall at the double

David Hall snared an early race-to-race double at Sha Tin to take his season tally to three wins from only eight runners – the equal-lowest amount of entered runners by any trainer since the 2020/21 season commenced.

The Melbourne Cup-winning handler scored first with long-standing maiden Bundle Of Energy taking the second section of the Class 5 Yau Ma Tei Handicap (1400m) under a driving finish from champion jockey Zac Purton. “Bundle Of Energy was an obvious one to run early, he was in hot form at the end of the season without winning, so he was always going to line up early,” Hall said.

The 24-start maiden ended an exasperating run of outs which spanned across three seasons after making his Hong Kong debut in May, 2018.

The trainer completed his quick-fire double with Eight Trigrams, who claimed the first section of the Class 4 Mong Kok Handicap (1200m).

“Eight Trigrams also, he really struck that good trial and good win on the dirt so I targeted him early regardless of whether we had a holiday or whether we had the break from training, those two horses certainly would have been there.

“I think it’s just about having the right horses for the right races at the time. I don’t think I can dwell too much on the COVID-19 period and the extended training sessions,” Hall said.

The Magnus gelding grabbed the third win of his career and second on the dirt but will now move up to Class 3 following that win as a 59-rater.

“You don’t get surprised when you see them trial like he did, he trialled extremely well on the dirt and that’s why we ran him there last season, it was always the plan – I knew there would be an early race on the dirt for him in the new season, so we targeted it,” Hall said.

Chad Schofield got off the mark for the 2020/21 season, partnering the Richard Gibson-trained Gold Chest to a weaving victory in the Class 2 Ho Man Tin Handicap (1000m).

“I thought his trial the other day on the dirt was very good, albeit a very quiet one. We drew on the right side, had a perfect race and we followed the favourite everywhere and maybe got out 50 metres too early but to his credit he dug deep and fought off the fast-finisher,” Schofield said.

“Richard’s (Gibson) been a very good supporter of mine since I came to Hong Kong and this season, we’re only right at the beginning but he’s been giving me good support as usual – so I’m always happy to ride a winner for him,” Schofield said.

Last season’s champion trainer Ricky Yiu got off the mark for the new campaign as Winwin Thirtythree grabbed his first Hong Kong win at his 19th try, getting the win under Frenchman Antoine Hamelin.