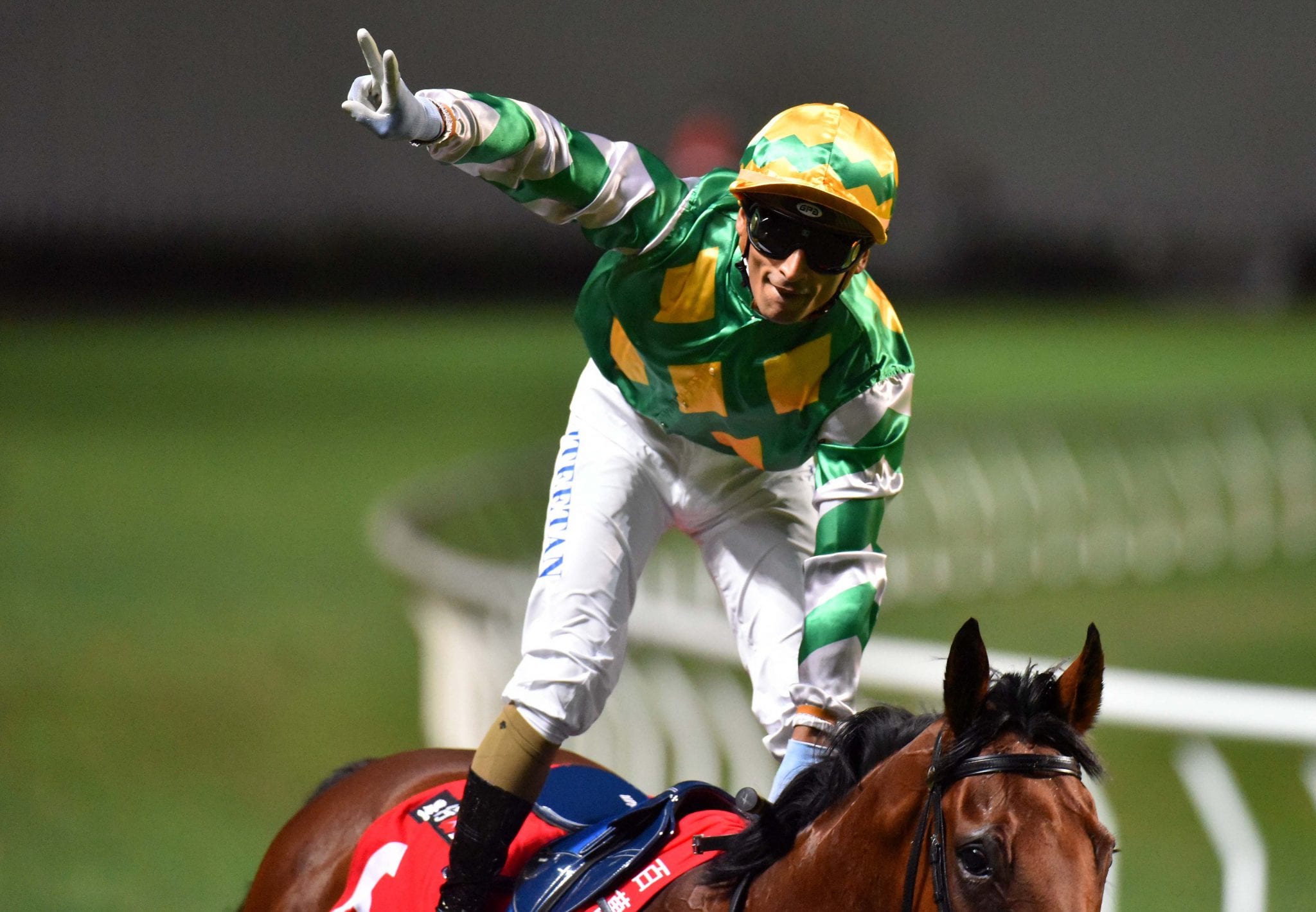 Karis Teetan sparkled with a midweek treble at Happy Valley on Wednesday, 11 November, which took him to joint-second place in the jockeys’ championship and maintained the early season pressure on the ‘big two’ of Zac Purton and Joao Moreira.

“It’s going well, you always appreciate the support and days like this, I just need to put my head down and keep working,” Teetan said after he sealed his three-timer with victory aboard Namjong Plus in the Class 3 Kennedy Town Handicap (1650m).

The Mauritian ace’s fourth treble this season saw him draw level to reigning champion. Purton with 23 wins, while Moreira sits nine clear of his rivals with 32 wins.

Teetan capped his three-timer with a double for trainer Me Tsui, as Namjong Plus held off the fast-finishing Reel Bizzy. The seven-year-old sealed his sixth Hong Kong win at his 26th start.

“I thought he was knocking on the door – he deserved the win,” Teetan said.

The Zacinto veteran stepped away cleanly from the inside draw to hold a position close to the speed on the rail before peeling out at the 400m mark to take over with 100m left to play out.

“I think the draw helped him, if I hadn’t drawn gate one, I could have ended up using him a bit to get a decent position,” Teetan said.

“I knew the leader was going to take me into the race and I got a nice trail right through, He fought on nicely, he got lost a little bit when he hit the front because he hit it pretty early and the horse down on the outside encouraged him a little bit to keep going.”

Earlier, Teetan kicked off his treble with victory aboard Chunghwa Jingshen in the opener, the Class 5 Sheung Wan Handicap (1000m). Peter Ho was the successful handler and he nailed a running double when Hay Run landed the Class 5 Victoria Handicap (2200m) under Derek Leung.

The first of Teetan’s and Tsui’s two wins on the card came with Best For You in the Class 4 Shek Tong Tsui Handicap (1650m).

“Best For You had a good spot and I was actually surprised that he broke so well, Me (Tsui) said to me he’s been jumping well so if he does, take that advantage and sit him in a good position,” Teetan said.

“I felt Zac (Purton) on my inside and I think my horse was not finding much until he came – it encouraged him to go again.”

Sky Darci laid out his credentials for a tilt at the HK$12 million Hong Kong Classic Mile, the first leg of the Four-Year-Old Classic Series, with a win full of merit in the finale, section one of the Class 3 Belcher Bay Handicap (1200m).

The Darci Brahma gelding mustered early from the gates to hold a midfield position under jockey Joao Moreira, before turning for home and switching back to the inside to pull away in style for a tidy two and three-quarter lengths win.

“He’s always indicated that he is a nice horse,” Moreira said. “Today he really proved that, winning with the top weight on his back after not really jumping very well; sticking himself in between horses and just running away – that’s all you can ask from a good horse.

“He just did not let us down – he’s a nice horse,” the Brazilian ace added.

The New Zealand-bred took his already impressive record to four wins from seven starts and maintained his unbeaten start to this term with two good Class 3 successes.

“No doubt he’s smart, it’s not his trip as well – we’ve just been trying to pinch a few races along the way. He’s pretty good,” Fownes said.

Fownes could have a strong hand in the Hong Kong Classic Mile on 24 January, 2021, should stablemate and fellow exciting juvenile Sky Field opt to go there.

“He’s definitely a miler, he’s another one, like Sky Field, I’m just so happy for these owners, they have two nice young four-year-olds. That was quite a good effort with 133 pounds, to do that,” Fownes said.

Neil Callan secured his first double this season with some help from trainer Paul O’Sullivan, as the pair combined for two wins together, wrapped with a smart victory from Lobo’s Legend in section two of the Class 3 Belcher Bay Handicap (1200m).

“It’s always nice to get a winner, never mind a double, but we’ll take as many as we can,” Callan said.

“I mentioned to Paul that when he got him, he had run well over here at Happy Valley. I knew he was versatile, he can handle it, he’s a small horse carrying top-weight and he knuckled down when he had to. It was a good win.”

The South African import was a Group 1 winner at his final start before arriving in Hong Kong, winning the SA Classic (1800m) at Turffontein Racecourse in Johannesburg.

“His first run for me was good, he just found the 1000 metres a little bit short – I was working on the theory that he probably just wants to run 1200 metres and that proved that today, even though he has won a Group 1 over 1800 metres,” O’Sullivan said.

“But he was aided by a good draw and a good ride – we got all of the favours today and we were lucky enough to win it.”

The South African-bred six-year-old could step out on the dirt at Sha Tin next start. His sire Trippi was a top-class dirt sprinter as a three-year-old, beating More Than Ready in the 2000 Group 1 Vosburgh Stakes (dirt, 1400m) at Belmont Park.

“I think he’s placed in Class 2 previously and he’s always trialled particularly well on the dirt,” O’Sullivan said. “He has a lot of American bloodlines in his pedigree, so if we get the option to run in a Class 2 on the dirt that’ll probably be our next move.”

Initially booked to ride California Levee in the first section of the Class 4 Sai Ying Pun Handicap (1200m), the scratching of the Irish-bred meant Callan was without a ride but the promotion of O’Sullivan’s Oriental Elite proved a fruitful one as the gelding went on to score by a half-length.